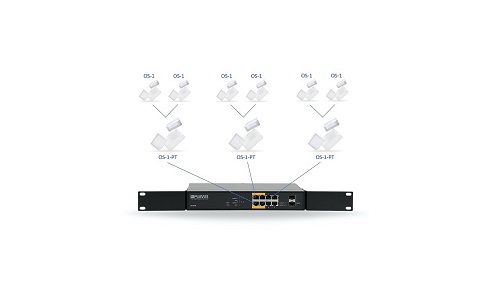 “As a 10-port switch delivering 180 Watts of 802.3bt PoE, the NS8-4B is quite unique in the Custom Electronics space. It’s a powerful, Layer 2 PoE switch at an affordable price point,” says Dusan Jankov, Co-CEO of PoEWit.

In the configuration above, the NS8-4B powers three of PoEWit’s OS-1-PT Outdoor Security Flood Lights. In turn, each OS-1-PT passes power to two additional lights via PoEWit’s PoE Pass-Through feature. Connecting three CAT cables to the NS8-4B can provide power to nine of PoEWit’s flood lights.