When the Evening Entertainment Group took over the former Derby Public House in Old Town Scottsdale’s entertainment district, their vision was to transform its 5,000 square feet of dining and patio space into a mashup of a chef-crafted dining destination and sports bar and craft cocktail lounge.

For patrons looking to enjoy pub grub and a drink in a swanky atmosphere, the space is appointed with wood-paneled walls, stained glass, tufted leather booths, shabby-chic couches, and antique tin-tiled ceilings.

To create a high-end AV experience for sports fans and turn Bevvy into a gameday destination, a technological upgrade was performed in-house by Jason Jones and his integration company LTJ Systems, which does sound, video, intelligent lighting, and just about anything new with tech.

To ensure there isn’t a bad seat in the house, LTJ Systems outfitted Bevvy with 42 46-inch and 55-inch displays. Feeding the screens are 13 DirecTV boxes and a Just Add Power VBS-HDIP-759A 3G+4+ video tiling processor, which allows up to four inputs on one screen in different configurations.

To incorporate additional sources as needed, there are two inputs located in each DJ booth and another two in a junction box outside the building.

When it came to providing a seamless gameday experience for fans, Bevvy required a video distribution and switching system that would allow staff to change each screen’s sources independently and send any source to any screen or group of screens.

Furthermore, the system had to be exceptionally intuitive, allowing any employee to perform these functions with minimal training. LTJ Systems implemented a solution that has proven successful in a number of the company’s other installations: networking solutions from Luxul, combined with Just Add Power’s HD Over IP platform and DTVGameControl’s iPad-based app for control. 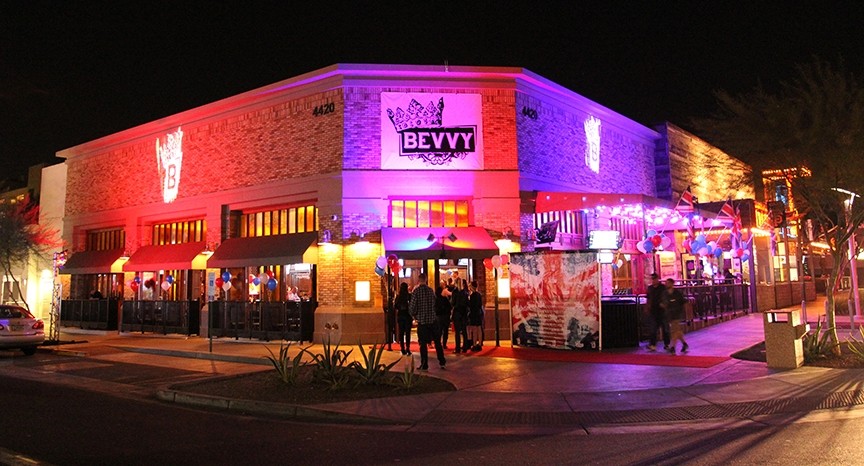 Any additional screens Bevvy wants to add in the future would only need another small receiver added into the system, while only another transmitter would be needed to distribute each additional new video source. To provide a solid network backbone, LTJ turned to Luxul.

“I first used Luxul switches years ago, after they were recommended by DTVGameControl, and they have been my go-to ever since,” says Jones. “Not only are they more responsive than the previous devices I was using, but they’re extremely easy to set up via an intuitive GUI and several units can be stacked to accommodate the largest of installations.

“And most importantly, they are extremely reliable, which is absolutely critical in settings like sports bars and nightclubs. I have yet to have a Luxul switch fail on me; it doesn’t get more reliable than that.”

Their PoE+ ports simplified installation at Bevvy, allowing LTJ to use standard Ethernet cables to deliver both power and high-speed data.

With Auto-Recovery, devices connected to the XMS-7048P by PoE don’t need to be manually rebooted when they fall offline or become unresponsive; the configuration in the switch triggers PoE-connected devices to reboot automatically.

With Power Scheduling, integrators can now trigger the switches to power PoE-connected devices on/off based on any schedule they create within the switch.

Employees at Bevvy control the system using the DTVGameControl floor-plan-based iPad application. The interface depicts the sports bar’s layout, display locations, sources, and more — all on one screen. Users simply tap a source to select it, choose a channel, and tap on the screen or screens they want to display it on.