After the widespread cancellation of the 2020 graduation and commencement season in the States, students were anxious to know whether this year they would be able to celebrate the completion of their degree programs on a grand stage.

“We have serviced Duke University commencement at the Wallace Wade Stadium [in Durham, N.C.] since the evolution of the campus back in 2003,” said the RMB Audio owner, whose company is based nearby.

“This year I was invited to initiate planning for an event which I knew may never occur,” said Cannady.

When University president Vincent Price finally received the green light from the Center for Disease Control and North Carolina Department of Health and Human Services, the RMB Audio tech team had to function test all equipment that had been dormant for one year.

The event was set for May 2; the stage loaded in on April 23 and the RMB Audio crew arrived on April 27. But, with strict socially distanced guidelines in force, the layout kept changing.

“Every day brought with it a new scenario,” said Cooper. While about 5,700 students had graduated, 2,000 undergraduates would attend, originally spaced six feet apart in the inner field, while the seating plans revised to allow an additional two guests.

The 40,000-capacity stadium would now host a total of 6,000 attendees and the original six-foot social distancing was reduced to 3 feet.

However, with the new seating design came a revision of the audio orientation. The planned seating at 180 degrees to the stage now increased to 220 degrees, placing seating behind the video wall.

“We were tasked with improving the audience experience in a setting that was entirely new from what everyone had practiced for years” said Cannady. “Suddenly we were unable to accommodate a third house left MLA Compact tower and instead had to deploy a stealth Martin Audio W8VDQ, driven by iK42 amps, to cover the expanding audience.”

“Decorators were insistent that no cabinets could be within the main camera image that required Martin Audio DD12’s to be placed on stands at ground level corners of the stage to cover the canter first row of seats,” said Cannady. “The audio image was seamless.”

The changes had been necessitated by the fact that the additional guests were set behind the stage in a J-shape, without visual access to the stage, but instead to a large Jumbotron at the far end of the field, the I-MAG supported by two LED walls, stage left and stage right.

However, such a sparsely occupied stadium presented challenges for system technician Matt Johnson.

“It meant there were more reflections to deal with, although we generally have reflections off the seating in any case,” he said.

In Martin Audio’s proprietary DISPLAY 2.3 operating software, they were able to deploy the Hard Avoid function to mitigate these reflections. 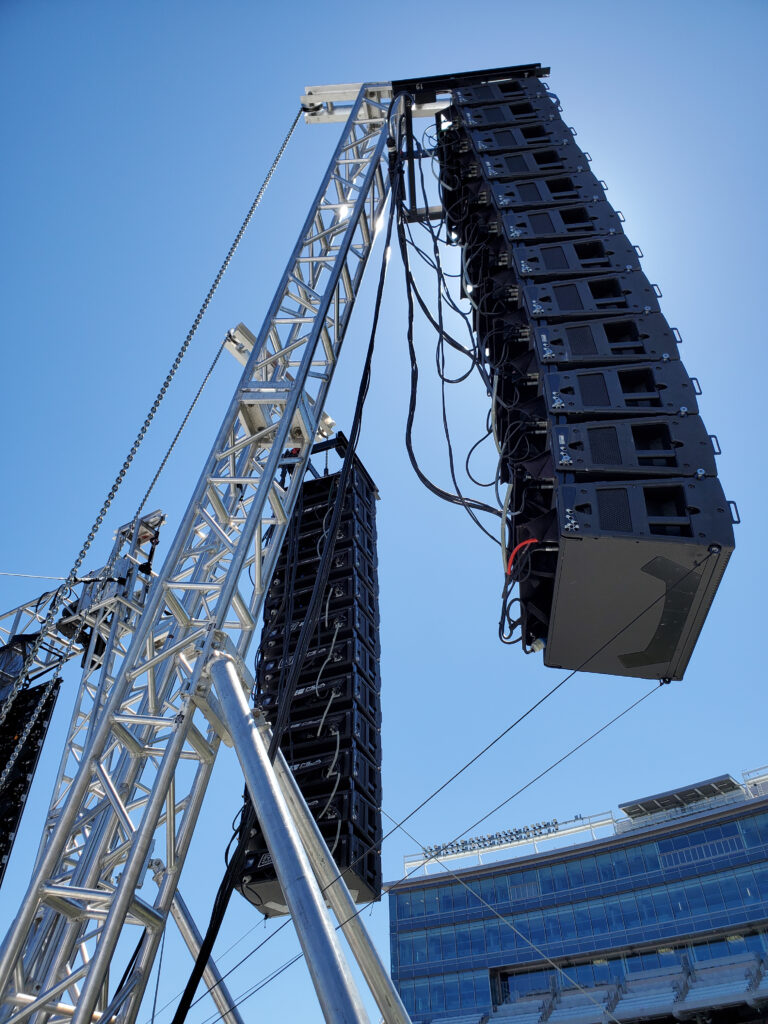 Inside the Duke University Commencement

Three identical lecterns were placed on stage, one of which was used by singer-songwriter John Legend, who delivered the commencement speech and received an honorary degree.

There was no live orchestra present this year—only a pre-recorded track—but there was a seven-piece a capella choral group spaced four feet apart.

“We also had a medical kit, windscreens for the mics with disposable wraps, cleaning and sanitization, which was all very discreet,” he said.

Cannady confirmed they had achieved the same sound at the first seat in Wallace Wade Stadium as at the back, with just a minimal dropoff in SPL overall.

“In all instances, the production requirements were increased above the project need to make certain we delivered a bigger and better auditory experience,” he said. “We will never see this type of health restrictive production again.

“The event could have been terminated at any time due to COVID-19 restrictions and I applaud the university for completing the memorable graduation,” said Cannady.

The Office of the Duke University president referred to the event having been a resounding success. In a comment to Cannady, they said, “I know that it was a very meaningful experience for our graduates and their families, particularly given the challenges of the past 14 months.”