The Naval Academy Athletic Association in Annapolis, Md., recently opened the Ron Terwilliger ’63 Center for Student-Athletes, a 25,000-square-foot facility that highlights the Academy’s tradition and history of physical education and intercollegiate athletics.

The Center includes the new Akerson Theater, a 180-degree immersive theater that uses a suite of Christie products, including HS Series projectors, Spyder X20, Mystique and Pandoras Box, and is designed to inform visitors, prospective midshipmen and their families about opportunities.

The Naval Academy Athletic Association (NAAA) engaged Dimensional Innovations to design, integrate and provide content for the Center and the Akerson Theater. The project began in 2017 and was originally conceived as a visitors’ center.

“The Center was really about what it meant to be a midshipman student-athlete – the academics, and the physicality of it,” said Drew Berst, executive director at Dimensional Innovations.

“The NAAA wanted a space to celebrate the accomplishments of its intercollegiate athletics department, and do it in a way that was interactive and state-of-the-art,” he said.

“The Academy considered what made them stand out amongst other schools, and one of those things was being timeless,” said Brian Silvey, creative director of interactive technology at Dimensional Innovations. “And for us, one of the ways to do that is to integrate technology throughout the space.” 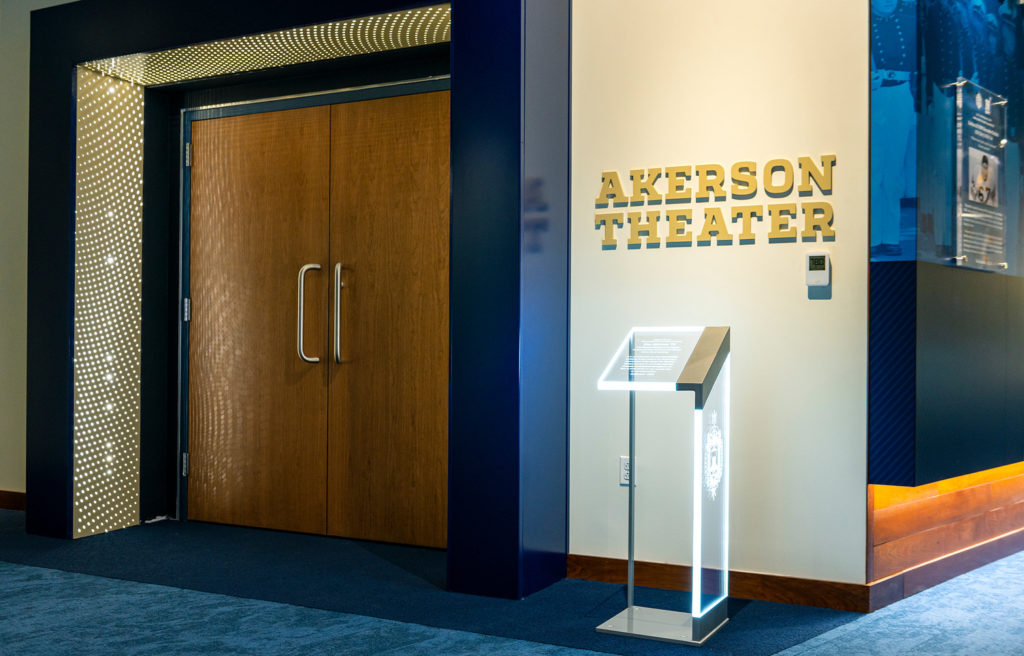 Inside the Naval Academy Installation

For the Akerson Theater, Dimensional Innovations began with a 3D model and worked with Christie to determine the AV requirements. They selected six Christie D20WU-HS 20,000 lumen 1DLP laser projectors, a Pandoras Box Server, a Spyder X20 multi-windowing processor and Christie Mystique to provide automated camera-based alignment and recalibration of the projectors.

The system allows the NAAA to use the theater for presentations, review game footage, or watch a movie.

“The Spyder takes inputs from the podium at the front of the theater; two Navy-owned computers used for presentations, a Blu-Ray player and three more inputs from a computer displaying a feed from the camera we placed on the roof overlooking the bay,” said Silvey.

While the Pandoras Box Server ensures the playback from the projectors is in sync and coordinates with the 7.1 surround sound audio system.

The projectors are enclosed in a sound-proofed ceiling cloud, which can lower to allow for maintenance, and they are warped, blended and aligned using Christie Mystique.

The system is designed so that the NAAA can create their own custom content, in the theater and throughout the Center.

“Recruiting experiences can become dated really quickly, but the NAAA can update content and keep it fresh,” said Berst.

Related: Christie Projectors Light Up FlyRide at ‘Beyond the Lens!’ Attraction

The result is a project that the Naval Academy Athletic Association is very happy with. Says Silvey, “The customer was ecstatic. This is just a very special project for them and the donors. You could see a level of emotion and excitement with the NAAA.”

The theater is the “crown jewel” of the Center, says Silvey. It gives visitors a clear picture of what the school has to offer, celebrates the physical mission of the Academy, and the numerous successes the school and athletes have received.

“The Akerson Theater is a fantastic resource for current and prospective students and teams,” says Larry Howard, senior director of sales in entertainment for Christie. “The Naval Academy Athletic Association has set a new benchmark in recruitment, and we’re thrilled to have worked with Dimensional Innovations to bring this project to fruition.” 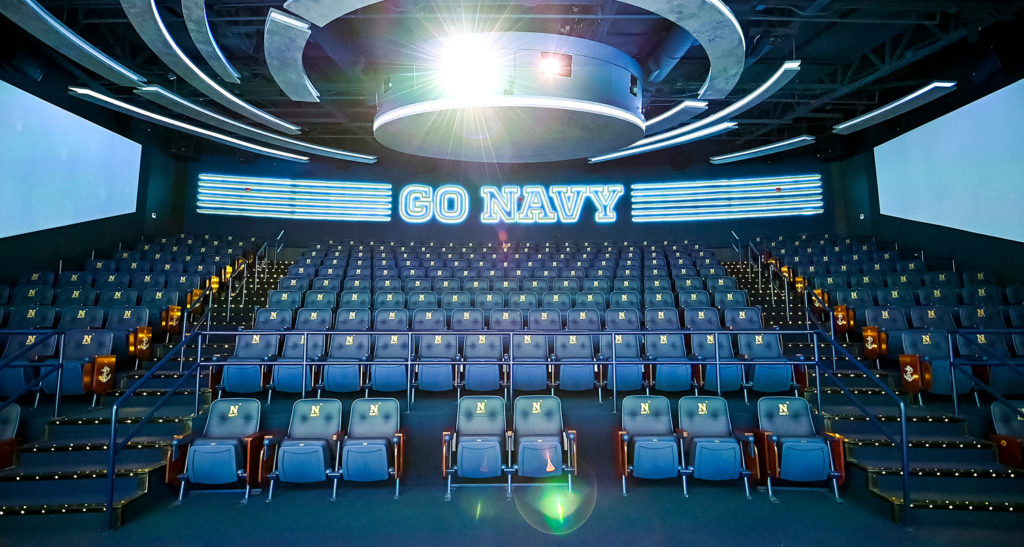