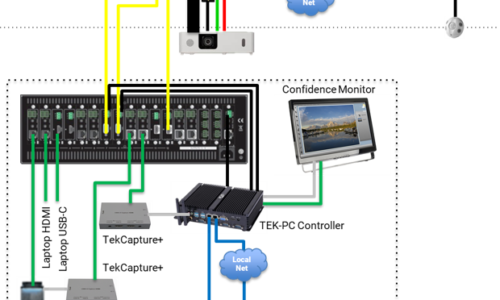 With educators more interested in exploring learning options, the 81200-DLC Drop-In A/V Solution from TEKVOX is “the most versatile choice for those looking for complete control of their advanced, modern classroom,” the company announcement says.

The latest drop-in solution from TEKVOX “builds on the company’s range of successful products designed to facilitate learning as educational environments evolve and change in response to new classroom demands,” according to the company announcement.

The 81200-DLC, which is shipping now, “provides all required components in an easy-to-use system while supporting extensive customization for those using larger rooms,” the announcement says.

The 81200-DLC utilizes USB to HDMI encoders “to enable a customer’s PC and a TEK-PC controller to act as the codecs for the system, recording or broadcasting camera footage and local content simultaneously with no additional hardware,” the company says.

A local DHCP server on the TEK-PC “allows the room to operate on its own local network, ensuring that everything works even in the event of a network outage,” according to the TEKVOX announcement.

Flexible matrix switching handles an expandable number of sources and displays.  The drop-in solution is HDMI, HDCP and HDBaseT compliant.

TEKVOX tests the 81200-DLC drop-in solution and ships it fully functional, pre-programmed and ready to use.

The standard configuration supports four HDMI inputs, two PZT cameras and two displays which can be any combination of flat panels or projectors. Upgrade and customization options are available.