If you’ve recently visited an office, you might’ve noticed that several tech-equipped huddle spaces have overtaken the traditional, oversized board room. The same thing is happening in higher ed tech with active learning spaces. 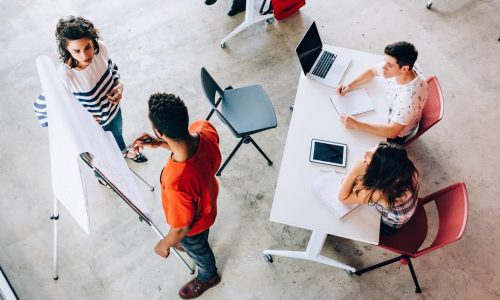 Teachers can deliver their message to smaller groups, students are becoming more engaged with the lesson and with each other, often working in groups or somehow collaborating or interacting with what’s being discussed.

And AV integrators are being called on to overhaul the lecture halls of the past and make them more compliant with the educational framework of today, whether through implementing Zoom or Microsoft Teams across campus or in other ways.

“A lot of the active learning spaces we’ve done, the main concern is about sharing content,” says Erik Sengel, major accounts manager for VCA Global. “We’re certainly getting more requests for it. The more our project teams get comfortable implementing them, the more they’re doing them.”

The opportunity for active learning spaces “really lies in the fact there’s no standard system,” says Sengel. “A nursing school might use the system differently than a business school.”

A nursing school, for example, might need more annotation capabilities for students to get the most bang for their education buck, while business school students might focus more on reading/sharing spreadsheets and charts.

“Distance learning” was a buzzword on campuses for a few years but the idea has largely fizzled out at this point, says Sengel.

Certainly the proliferation of Zoom and Teams means students can attend class even if they’re “under the weather” or actually sick, but there are fewer “purpose-built classrooms with large, expensive systems” these days, he says.

The majority of VCA Global’s higher ed tech work is in the northeastern U.S., including New York, New Jersey, Connecticut, Pennsylvania and Maine. But, as the name suggests, the company works across the country and around the world, although that’s less common in higher ed than corporate, says Sengel.

Distance learning as a concept is still used when one class is looking to connect with another class at a sister school or when a professor needs to deliver a lesson to multiple satellite campuses at the same time, says Sengel, but those uses are much more isolated than they used to be for VCA’s clientele.

“A lot of the strategy [for higher ed AV installations] involves students working together,” he says.

With IT taking on a more prominent role in AV installations, “it comes down to our technical teams knowing what the customer wants and keeping up with higher ed tech,” says Sengel. That includes getting certified on new products that are released and requested.

“Higher ed has been a little slower to adopt networked AV than corporate, but we’re seeing more and more that I’m not just dealing with AV managers,” says Sengel. “They’re bringing in their IT teams to talk about things we weren’t talking about five, seven years ago.

“Codecs are now dedicated computers. We have to integrate around it. Big codec rooms are going away or aren’t there anymore,” he says. VCA always asks campus IT staff if the rooms they’ll be working on will be on the overall school network or a local VLAN, says Sengel.

“A lot of it we don’t touch directly,” he says.

“They’re managing their own rooms and we’re designing around that. Our approach is always to serve as consultant. A lot of these colleges have their own standards, which we’ve helped to implement in some cases.

“Some of these schools are looking for design help, others send their projects out to bid. Budget comes up a lot more during design than at installation. Higher ed budgets are not on the same level as Fortune 100 and corporate clients, but it’s not always a race to the bottom either.”