Lady Gaga has spent much of her career in the spotlight donning costumes that sent messages and served as ways of imprinting her performances in the consciousness of fans, so it’s no surprised she used the MTV Video Music Awards as a platform for delivering the importance of wearing a face mask.

Gaga wore an LED facemask during her entire performance at the 2020 VMAs, which featured a medley of songs from her latest album, “Chromatica.” The LED mask was one of seven masks Gaga wore during the awards show, one for each of the outfits she wore during the socially distant event Sunday night.

Here’s more about Lady Gaga’s Video Music Awards performance, including a live performance of her duet with Ariana Grande that’s climbing the pop charts these days:

The showstopping set was a medley of Gaga’s songs, including “911,” “Rain On Me” and “Stupid Love” from her hit album “Chromatica.”

Making a statement on abiding by safety guidelines, Gaga, 34, wore a LED face mask throughout her set, as well as Ariana, 27, who wore a black silk mask, as she joined her for their hit “Rain On Me.”

Of course, Lady Gaga is no stranger to using technology in performances that bring the eyes of the world upon her. During her Super Bowl LI halftime show at NRG Stadium in Houston, Gaga began her halftime show with a tribute to America, singing “God Bless America” and “This Land is Your Land” on the roof of the stadium.

She performed some dizzying flying effects, crooned a medley of her hits, led high-energy dance routines and closed with a rendition of “Bad Romance” in an action-packed, 12-minute show.

Lighting designer Bob Barnhart chose Claypaky Mythos and Sharpy fixtures to help illuminate the highly anticipated romp.  Barnhardt, who has been part of about 20 Super Bowl halftime shows, used a grandMA2 console to control a portion of the lights during Lady Gaga’s theatrics. 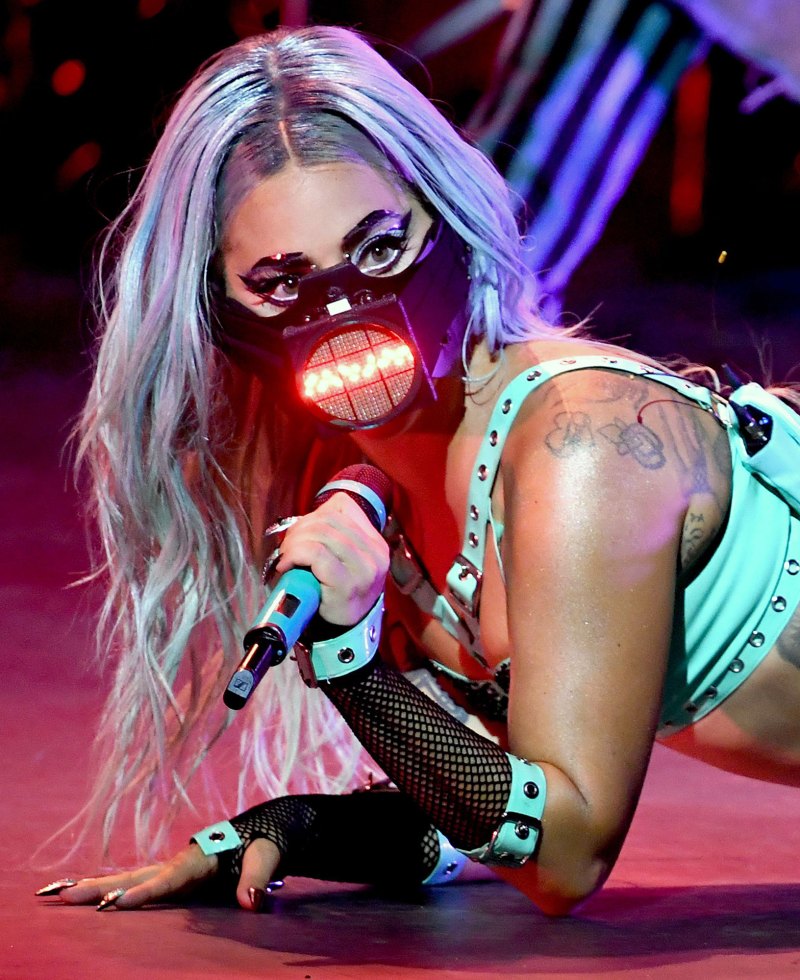 Lady Gaga wears an LED face mask during her performance at the 2020 MTV Video Music Awards in New York City on Sunday night. (Photo courtesy of Us Weekly)