What is viewed as mission critical within the commercial AV space has seen substantial growth. Key drivers of this include integrated technology’s ubiquity in a range of environments today and an awareness that those tools have the power to improve experiences and enhance outcomes. Some environments, however, bring mission critical to the next level — and those are precisely the spaces in which North Kingstown, R.I.-based Constant Technologies and Hayward, Calif.-based Jupiter thrive. The former is a renowned integrator specializing in command and control; the latter is a leader in videowall processors and advanced display technology. It’s perhaps unsurprising, then, that these two organizations synergize beautifully with each other and, indeed, have maintained a quarter-century collaborative partnership.

Here, we’ll explore the contours of that multi-decade relationship, and we’ll dive into its fruits — namely, the companies’ work, in tandem with GE Healthcare Systems, to create world-leading operations centers.

CI chats with Brad Righi, president of Constant Technologies, and Craig Stumbaugh, director of North American sales, Jupiter, to understand the relationship’s development and growth. Righi, who has been at the helm of Constant for more than two decades, has seen a multitude of changes in the mission-critical space.

“So,” Righi begins, “we started to take on relationships with a select few vendors.” Embracing the mission-critical approach from the outset, Constant Technologies chose vendor partners carefully, finding that Jupiter offered that rare combination of incredibly robust systems and comfort in an environment where failure isn’t an option.

“[It was about] how they approached quality and delivering quality products,” Righi explains of Jupiter. “We didn’t want to put our name on just anything.” From there, the relationship developed quickly, including a brief period when Constant Technologies was OEMing product from Jupiter.

Although that activity ended years ago, the relationship continues to blossom and grow.

Constant Technologies’ enthusiasm for Jupiter technology is matched by the vendor’s confidence in Constant’s expertise. Noting that Constant Technologies has a laser focus on the command-and-control space, Stumbaugh says that the integrator is uniquely positioned to leverage Jupiter products’ capabilities, resulting in higher-caliber project outcomes.

“They were operating our technology at a level that no other dealer I had seen had the skillset to do or the ability to do,” he adds. 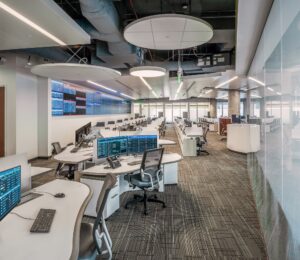 Indeed, Jupiter’s level of trust in Constant Technologies is so high that their respective engineering teams meet weekly to discuss potential product enhancements, areas of improvement and future needs. Adaptability of that sort is particularly important against the backdrop of an evolving definition of “mission critical.” It’s not just the Department of Defense and NASA that require the rapid response of an operations center anymore; now, global financial institutions, cybersecurity hubs and, as we’ll shortly see, medical institutions require the same.

Make no mistake: Technology is the foundation of the Constant Technologies/Jupiter relationship. Each organization is fundamentally committed to robust solutions that can withstand the rigors of 24/7/365 environments. But there is also a deep organizational and philosophical alignment that underpins their quarter-century partnership. And central to that philosophy is pride in, and care for, the environments that they create.

“There’s very little turnover at both organizations,” Righi attests. That, he says, “…leads to a similar culture and people who care about what they put on the street.” Stumbaugh adds that both companies think not about products but, rather, about solutions — a recognition that each client has, and each project presents, unique attributes that require individualized attention.

Against the backdrop of the COVID-19 pandemic and its potential to completely overwhelm the global healthcare system, no client better reflects unique project attributes — and mission-critical status — than hospitals. That’s where Constant Technologies and Jupiter’s nearly seven-year partnership with GE Healthcare Systems comes into play.

GE Healthcare had a vision for a mission-critical environment within hospital systems where all the data, from all departments, would be accessible in one room. In Stumbaugh’s words, it was about bringing “…all the departments together into one room to create that common operating picture.” He explains that GE Healthcare had the tools to create a treasure trove of data for hospital teams to pore over — everything from number of incoming patients per minute and available beds, to equipment inventory and breathing-apparatus availability, to doctor and nurse staffing levels. 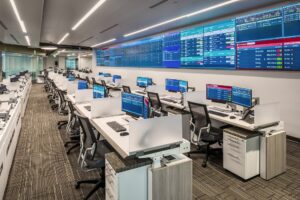 Adding the missing ingredient — namely, a way to present that data via a videowall — is where Constant Technologies and Jupiter could add their unique expertise.

The crown jewel of the initiative with GE Healthcare, however, is AdventHealth Mission Control, the largest healthcare command center in the U.S. The stunning space encompasses more than 12,500 square feet; in that expanse, Constant Technologies designed, built and installed 78 workstations, which a team of 50 staffers occupy. Some 60 tile monitors compose the videowall, which takes in an astounding 500,000 messages per day.

“Our focus was taking the products — obviously, in collaboration with GE — and looking at [these rooms] from a spatial, reactionary standpoint, [including] where folks in the room would actually sit,” Righi elaborates. All those considerations facilitated good sightlines and rapid, seamless response.

‘The Most Critical Time in Modern Medical History’

“[These institutions] really were able to rely on this solution,” Stumbaugh stresses. “And Constant was there to physically install it and make sure that the systems were supported at the most critical time in modern medical history.” And that sobering turn of phrase is not hyperbole; after all, in the U.S. alone, total confirmed COVID-19 cases are far past 80 million.

With human lives at stake, healthcare clients like AdventHealth needed fault-free reliability. Thankfully, that is Constant Technologies and Jupiter’s specialty. “This really kept these hospitals up and running through the hardest of times,” Righi reflects.

With a productive, quarter-century-long partnership, Jupiter and Constant Technologies continue to collaborate as effectively as ever, just as their mutual alliance with GE Healthcare further blossoms. The team has also identified additional opportunities for projects in critical infrastructure, banking and cybersecurity, and that vision stretches beyond the U.S.’ shores.

“There’s a bright future ahead,” Righi promises. And for everyone who relies on mission-critical centers — from healthcare and emergency operations to finance and security — Jupiter and Constant are growing with the evolving need for these much-depended-on spaces.