If you went to your local mall or shopping center during the holidays, you probably noticed something a little bit unusual: an open parking space—and sometimes a lot more than one. Most people these days are eschewing a trip to the mall in favor of pointing, clicking, and buying.

That troublesome trend — which isn’t all that different from the challenge sports team owners face in getting fans to leave the comfort and high-tech environments of home— means retailers have to do something new and different to attract customers to their actual brick-and-mortar outposts.

Mood Media recently published a report that looks at the importance of four pillars — brand immersion, convenience, customization, and the idea of a store as a community — in retail stores and restaurants and the role retail technology plays in creating those experiences.

Through sights, sounds and scents, the in-store experience can reach a whole new level that’s impossible to create by surfing someone’s website or ordering something on your smartphone.

“The expectations were set about 10 years ago that there was a desire to customize the experience,” says Danny Turner, global senior VP of creative programming at Mood Media. “It creates a stronger brand connectivity.”

That connection can come through the shopper hearing a song he or she likes or via objects that are in the store or that entice people to check it out, says Turner.

For example, Mercedes-Benz is among the best at allowing customization of its products—in its case luxury cars—while ensuring the experience is “within a particular brand guardrail,” says senior VP and global chief product officer Trey Courtney.

Although “sound is primarily what brought us to the dance” and Mood Media boasts 65 global music designers creating playlists at 500,000 locations for 150 million people per day, says Turner, “it’s so much more than just creating a snappy playlist. The key is picking the right piece and the right scent.”

All songs are double-screened by people to listen for objectionable phrases and content, says Turner. For example, the popular Migos song “Stir Fry” was taken out of rotation for most Mood Media customers because it’s about how to cook crack cocaine in the kitchen.

“You have to feel like you’re going somewhere to connect with people and connect with something you’re passionate about. It becomes a destination.”

Turner pointed to the Westin hotel chain as one example of triggering a feeling within its patrons through the use of scent, but it’s done in retail locations around the world.

Immersion is built on a combination of play—something video game designers realized years ago—and art, because the digital world transcends the physical world.

The “store as a community” is a more recent trend that is certainly gaining steam, although it has its roots in the comic book and music stores of the past, says Courtney.

He points to restaurants that offer wine tastings and pairings and an offshoot of the HEB grocery store chain known as Central Market, where people who hate the traditional grocery store will love to visit.

Central Market, which is similar to Whole Foods, features play areas for kids, performance artists and special events for young people as their parents cruise the aisle, says Courtney.

Where Retail Technology Comes into Play

“You’re going to be asked how all these systems talk to each other to create a compelling environment,” Courtney says of retail technology integrators’ role. 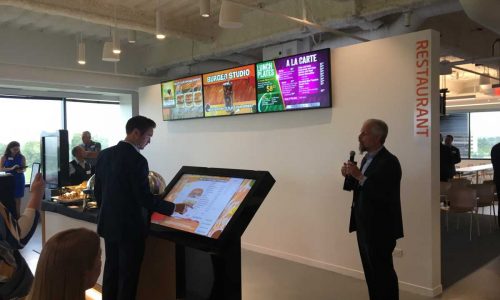 “And you need to understand what data you can collect to realize ROI. Retailers who understand how to capture that info [have an advantage].”

Integrators can cater their solutions based on the service they provide retailers beyond the systems they install, he says. Mood Media licenses content from social media platforms, static images and third parties.

Large retailers work through agencies, so Mood Media edits content for them, showing the differences between web and in-store content and localizing it.

Mood also offers monitoring services of the in-store retail technology to ensure it keeps running as it should.

“We’re not a service provider. We’re a brand partner,” says Turner. “When you establish relationship that way, it enables more productivity.”