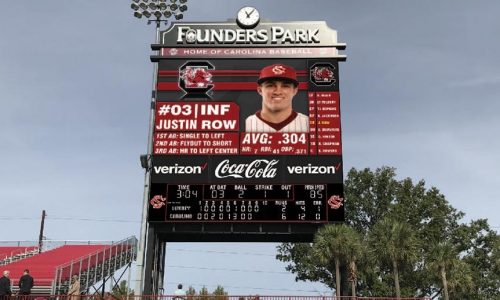 Daktronics installed a 1,450-square foot-video board at Founders Park for the University of South Carolina baseball team.

It’s not exactly ideal baseball weather in most of the U.S., but college baseball powerhouses generally reside in the southern part of the country and the University of South Carolina baseball team is a perennial favorite to advance to Omaha, Neb., for the College World Series.

This year, the Gamecocks had another reason to celebrate, even before the season started. And, no we’re not talking about 2010 College World Series Most Outstanding Player Jackie Bradley Jr. earning the 2018 American League Championship Series MVP award on his way to a World Series championship with the Boston Red Sox.

Thanks to a continued a partnership with Daktronics to design, manufacture and install a new 1,450-square-foot LED video display for Founders Park in Columbia, S.C., fans are getting a better AV experience than ever as they gather to root for the Gamecocks with a display that ranks in the top 10 among all college baseball teams.

“In working with our multimedia rights holder, IMG College, we were able to secure a video board that will be beneficial to our program and add to the game-day experience at Founders Park,” said South Carolina Athletics Director Ray Tanner. “The LED video display [is] easy to see throughout the ballpark [adds] quality content that [is] enjoyable for fans.”

“Founders Park is a great collegiate baseball stadium and we’re excited to be a part of this scoreboard project,” said Daktronics sales representative Corey Williams, noting the new display is almost 3.5 times larger than its predecessor. “We can’t wait to see it in action and how Gamecock fans react to the new addition.”

The display is capable of variable content zoning allowing it to show one large image or to be divided into multiple zones to share live video, instant replays, statistics and game information, graphics and animations, and sponsorship messages.