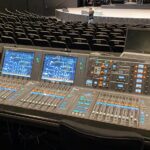 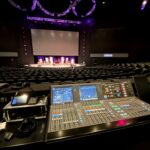 Rivers Church is one of the fastest-growing congregations in South Africa, per a statement. It began with only 70 people in 1992. Today, Ps Andre and Wilma Olivier have grown the church into a faith of thousands. It also has multiple campuses located in Sandton, Kyalami, Centurion, Durban North and Ballito. The church describes itself as a “dynamic church.” It offers inspirational messages and community to all age groups. Recently, its online streaming service has further widened the reach, particularly amidst the pandemic.

Meanwhile, Stage Audio Works (SAW) is an international supplier, manufacturer and distributor of complete technology solutions to the live event, houses of worship, commercial, education and other sectors.

The church highlights its dynamic integration of cutting-edge audio-visual technology to enrich its services, resources across campuses and online streaming. “We started working with SAW in 2011 at the most basic level, but they are now our principal supplier and integrator for audio and video,” explains Andrew Illgner, head of Audio at Rivers Church.

Illgner adds that although the church worked with several suppliers, SAW brings in additional knowledge and expertise. He also praises its service which goes beyond simply supplying products. “They have an extremely knowledgeable team; for example, it was Nathan [Ihlenfeldt, SAW’s technical director] who got us on the path of digital audio networking,” Illgner adds.

The two Yamaha PM7s now serve as the primary mixing consoles in the Sandton campus. They thus cover the main auditorium which hosts a maximum capacity of 3,000. One controls the Front of House (FOH). Meanwhile, the other is dedicated to the monitors.

These new consoles replace the CL-series system that SAW previously supplied in 2015. The existing system comprised a CL5 and a CL1 that handled the FOH. It also had two further CL5s that oversaw the monitors. These were repurposed which then revamped the second auditorium, youth venue and other campuses across South Africa. It also enabled upgrades in the five different venues.

The new PM7s join the ranks of Rivers Church’s twenty strong collection of Yamaha mixing consoles. Notably, Yamaha produced all consoles in use by Rivers Church. This has been the case since its adoption of the brand in 2009. The church adds that this attests the quality and ease of use of Yamaha consoles.

“Due to the large scale of our operation, we often have to rely on the generosity of volunteers when it comes to operating equipment,” Ed Helliwell, technical manager at Rivers Church explains. He then underscores Yamaha’s intuitive and standardized console design. According to Helliwell, this allows the volunteers to slot them in easily. They’re also comfortable with the console they haven’t seen before, says Helliwell.

Additionally, interoperability is an essential requirement for networking capability. To this end, all campuses utilize the flexibility of a Dante ecosystem. “We have a complex environment that is always changing — church on Sundays, conferences and other activities during the week etc.,” notes Illgner. “Dante makes it very easy to change scenarios quickly.” A Q-SYS solution also allows wider transport between the Rivers’ campuses.

“In 12 years, we’ve had almost no downtime due to technical faults,” Illgner continues, acknowledging the importance of the specification and commissioning of quality gear. He remarks, “Stability and reliability is excellent. On top of this, the round-the-clock service SAW provides is amazing — everything needs to work on a Sunday!”

Per a statement, SAW has specified and supplied a vast array of AV equipment for Rivers Church over the course of their relationship. All campuses are equipped with d&b loudspeaker systems, Sennheiser microphones and IEM systems. On the visual side, SAW have provided numerous Pixel Plus screens and switching gear. It also provided Black Magic cameras to enhance Rivers’ broadcasting capabilities.

Nathan Ihlenfeldt, CTO of SAW expresses his excitement on another successful collaboration with Rivers Church. He states, “Our relationship is fortified by another upgrade to their Yamaha mixing consoles. Working with them over the years has been a pleasure. We’re looking forward to seeing what the next step will bring, and how we can help realize it.”

Illgner then summates the partnership. “We at Rivers know what we want and SAW makes it happen. Since SAW has been on board things have really moved forward in the AV space — and it’s thanks to [the team]. There is sufficient trust between us that they even use us as a testing ground sometimes — and that’s a good place to be,” he concludes.

Click on “View Slideshow” on upper-right corner to see images of the Yamaha PM7s installed by SAW at Rivers Church.