NWN Corporation CEO Jim Sullivan says he didn’t set out to create a $1 billion powerhouse by acquiring Exeter, R.I.-based Carousel Industries, but the combination of two of the biggest names in IT integration has created a company that can serve even more customer needs even more quickly.

The acquisition, backed by New State Capital Partners, “comes on the heels of a record 24 months for NWN, including significant adoption of its solution portfolio and 20% acceleration in revenue growth from the year prior,” according to the joint announcement.

The pairing of NWN and Carousel took about a year from the first conversation to the signing of all of the legal documents, says Sullivan. Executives from each company knew each other well, so they knew what each other could do and why the combination of the two companies made so much sense.

Carousel Industries serves more than 5,000 customers nationwide. Founded in 1992, the company employs more than 1,000 people across the country. Like NWN, the company has expertise across unified communications and collaboration, secure infrastructure, data centers, networking and cloud solutions.

“We had the same vision of where the industry is going and what we wanted the companies to be,” says Sullivan. “We figured out really quickly we could go bigger and faster together.” The combined company now boasts about 6,000 customers, but only 35 of them represent any sort of overlap, he says.

Carousel Industries chief revenue officer Jim Marsh says the timing of the acquisition worked out well on both sides.

“We were working on upgrading and putting a lot of our operation in our system to go to market in 2022,” he says. “This was more of a strategic opportunity for both companies. We have a lot of similarities around solutions and where we see things going.

“Not having a lot of overlap allows both companies to excel at what they do,” he says.

The COVID-19 pandemic helped to emphasize the importance of cloud communications and introduced it to people who might not have otherwise been aware of it much more quickly, says Sullivan. That fast track made the partnership between NWN and Carousel even more critical, he says.

“We wanted to get to market fast and have the right kind of compelling offerings,” says Sullivan. “Once you have the right chemistry and synergy and confidence things are going to work, there’s a natural timeline of getting things done, but that’s really secondary for how much sense it made for us to do this.”

Behind the Scenes with NWN and Carousel

Although there were some face-to-face meetings including Sullivan, Marsh and Carousel Industries founder and CEO Jeff Gardner, company leaders also used the technology they sell and install for their customers to conduct due diligence and close the deal more quickly than they otherwise might have.

“We used the technology to facilitate a faster due diligence process and even a faster close,” says Marsh.

While the technology came in handy, so too did the personal relationships between the executives from both companies, says Sullivan.

Marsh notes the difference between this negotiation and acquisition and those with which Carousel was previously involved is the size and scale—and the potential future impact it could have for the combined company and its existing and future customers.

“When we looked at acquisitions in years past, $20, $30, $40 million was our target,” he says. “(The acquisition by NWN) really gets you to market at a different speed. Jim (Sullivan) put himself right in the fast lane and that’s what we’re looking forward to.”

Although NWN will be the parent company in this deal, Sullivan looks at the deal with Carousel as “more of a collaboration.

“There’s an aligned vision on things we’re working on,” he says. “I think we’re going to manage to the strengths of the collaboration. We already have established good trust and chemistry.

“We knew (Carousel) pretty well on paper (when the acquisition talks began). It was really meeting Jim and Jeff and where they were going and their vision. The more work we did, the more excited we got. Carousel is an absolute powerhouse in unified communications and contact centers,” says Sullivan.

“This is the first step, but it’s a huge step for us,” he says of NWN’s future plans in the M&A space. This is a $70 billion industry. Once you have this size platform, you can do a lot of things. Our focus is on getting this right for our customers.”

Marsh has made no secret over the years about growing Carousel Industries into a $1 billion company so he’s proud to have reached the milestone through the NWN acquisition.

“It’s always been the race to $1 billion,” he says. “I’ve always said NWN would be good partners. We wanted to make sure we were aligned.” 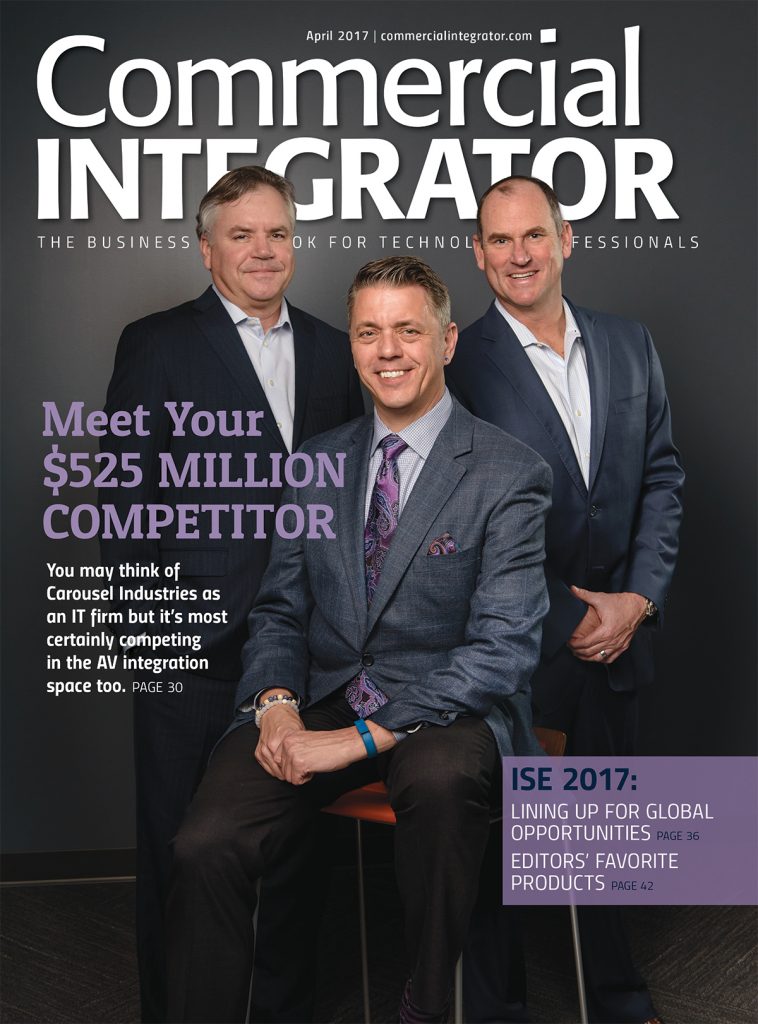 Not long after acquiring Atrion, we presented Carousel Industries as a $525 million competitor in the AV integration space for our April 2017 cover. Photo: Adrien Bisson

Sullivan says it’s rewarding to reach the $1 billion milestone but it wasn’t why NWN acquired Carousel.

“We have the right differentiated solutions,” he says. “We have an incredible combined employee base. It’s a great opportunity to have a growth company and create a culture where it’s a great place to work and customers want to do business with you. You have the opportunity to win every time you show up and help customers.

“To be the number one provider in this industry, you have to be a $1 billion company. It’s probably less about the revenue and more about being the best provider in this space,” says Sullivan.

“The billion dollars does give you a different level of scale and confidence with customers, but you still have to keep that entrepreneurial flare,” he says. “It’s a bigger, more profitable, stronger company with more capabilities.”

Marsh agrees that the deal opens more opportunities for Carousel and NWN.

“Having size and scale in today’s world is very important,” he says. “You need the resources and to be able to manage everything. We’re having conversations now around the customer journey.

“That size and scale allows us to be bring better sales and service across the board that a smaller company can’t do in today’s world,” says Marsh.

After a slowed pace of mergers and acquisitions because of the pandemic in 2020, activity has been brisk across AV and IT so far in 2021, like it was from 2016 to 2019. Sullivan says NWN is poised to grow organically in the wake of the Carousel deal with a focus on “the customer experience.”

“We’re focused on driving differentiated solutions to customers,” he says. “This combination sets us up well.”

Marsh expects to see many more transactions, both large and small, in 2021 and beyond.

“I don’t see it slowing down at all,” he says. “Transformation is around us at every corner. If you need it and your customer is asking for it, there are only two ways to go. We have to make it easier for our customers. If you can’t do that as a services company, you’re not going to win.”