The 80-plus-acre Resorts World Las Vegas is a newcomer to the Las Vegas Strip, bringing with it more than 3,500 guest rooms and suites in three separate hotel buildings, more than 40 food and beverage establishments, a 5,000-capacity theatre and a massive AV-over-IP system with over 2,000 PoE endpoints from Visionary to bring guests unrivaled connectivity.

The project, which took multiple AV integrators to complete, is being called the largest AV-over-IP network of its kind and doesn’t include any matrix switchers, according to Visionary, a provider of networked AV solutions.

According to the company, the network covers almost every part of the property and boasts 2,000 end points – and growing.

Technology West Group of Las Vegas was chosen to oversee the project, including design and installation of the overall AV system and property-wide network.

Richard Reisig, vice president for Technology West Group, worked directly with Resorts World Las Vegas to facilitate the design of the low-rise section (known as “the podium”), the west tower, The District and all outdoor areas. He says the network at Resorts World Las Vegas includes more than 2,000 PacketAV endpoints and 2,000 QLAN channels.

“The number of endpoints continues to grow as we build out the system,” he said. “It’s a very large, purpose-built network designed to supply one gigabit of non-blocking bandwidth, end to end, to any location on the property with less than a millisecond of latency.” 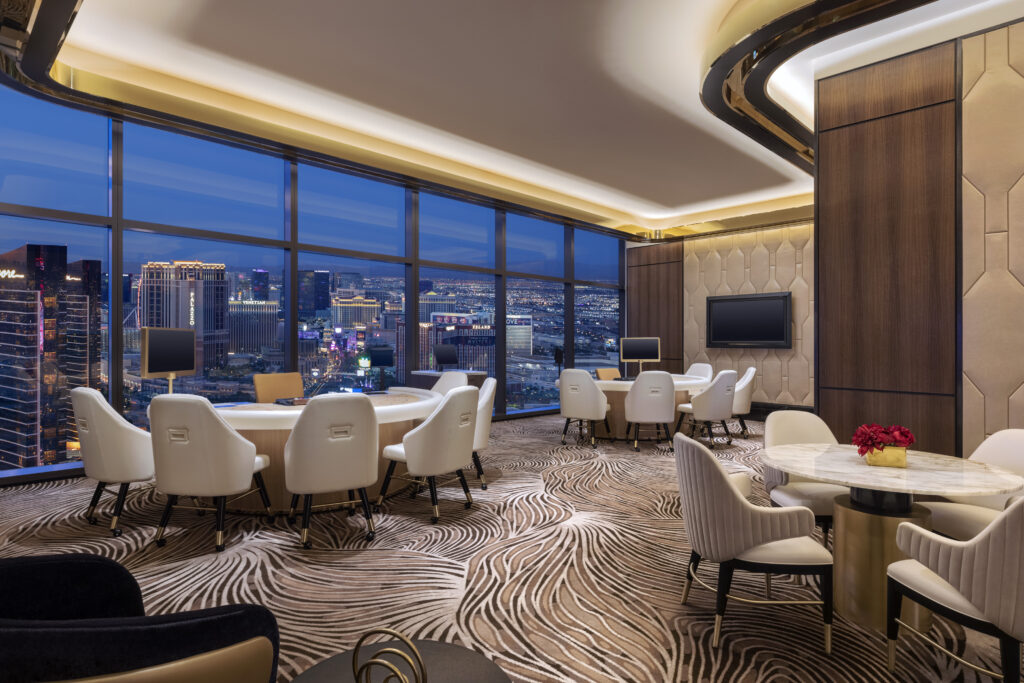 According to Visionary, the PacketAV endpoints offer internal device VLAN tagging. Due to the complexity of the network and the different protocols, including video, QLAN, Dante, AES67, DMX and control, it becomes critical to segregate the traffic for effective network management.

“With the size and complexity of the network, VLAN tagging was critical for us,” Reisig said. “Especially at the scale that we’re hitting, you can’t have 2,000 devices on a single VLAN network and just hope it works.”

Also unique for this project was the creation of a Bluetooth-enabled wall plate encoder implemented throughout the system. The company had an HDMI wall plate encoder with VLAN tagging, but the project didn’t call for analog audio, so Visionary created a custom wall plate that incorporated Bluetooth audio.

“Their flexibility changed the game for us,” Reisig said. ”It enabled us to reduce port counts, switches, power consumption and overall costs by integrating two distinct products into one.”

The networked system also allows Resorts World Las Vegas employees to transmit a signal from anywhere on the property and distribute it to the 100,000-square-foot LED screen, the theatre, casino or anywhere else on the property.

Corey Brushia, president of One Touch Living, said in a statement that the in-room technology was designed to enhance the guest experience and create an environment that enables guests to interact with the rooms and the property.

“Visionary eliminated the need for a conventional HDBaseT matrix,” Brushia said. “Visionary allowed us to network from anywhere to anywhere. For example, we can take content from an executive suite, connect it with a meeting room or ballroom, or stream a special event into a villa. The possibilities are endless.” 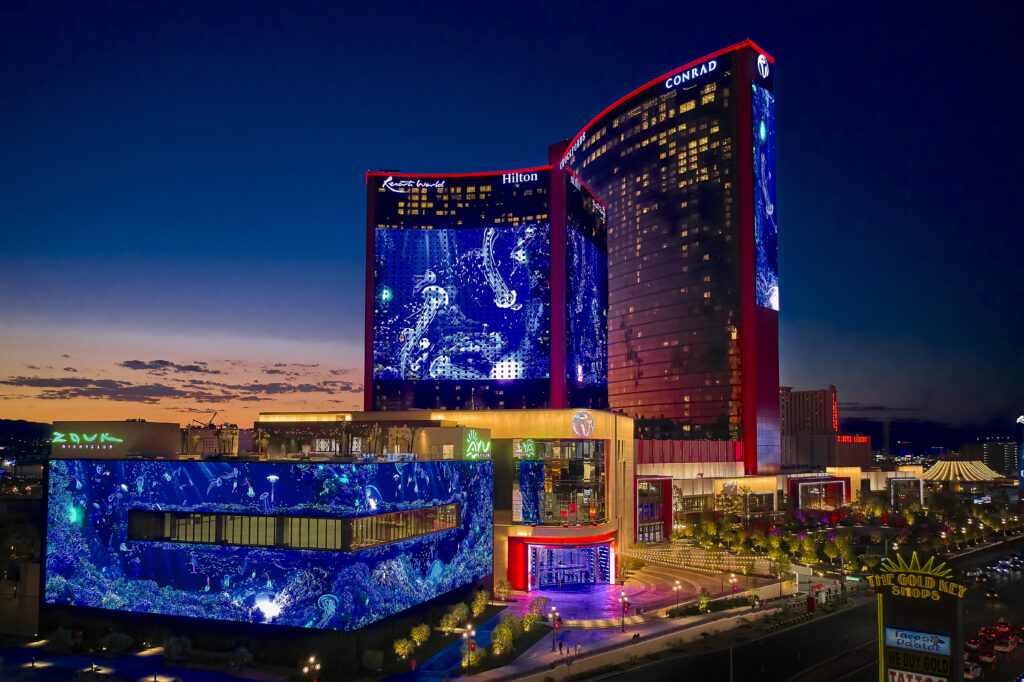 For the resort’s first-floor common areas like lobbies, registration, casino and gambling areas, Las Vegas-based integrator National Technology Associates was brought on to the massive project that featured thousands of loudspeaker channels in addition to the 2,000 endpoints.

Shane Snell, project manager for the company, said in a statement that it’s probably not possible to distribute those components in any other way than networking.

“Every system can now reach each other because the audio and video integration are on the same network,” he said. “We’ve standardized Visionary and QSC to streamline the communication between the technology components.”

The project also includes a 5,000-capacity immersive theatre that will feature musical guests such as Celine Dion, Carrie Underwood, Katy Perry and Luke Bryan. For the theatre, Montreal-based theatre design company Scéno Plus was chosen for the design.

François Blais, vice president of technology and specialized equipment for Scéno Plus, called the theatre “one of the finest venues” they’ve ever designed.

“Visionary enabled us to rapidly and efficiently manage this large-scale installation,” Blais said.

Sébastien Larose, AV designer for Scéno Plus, said with over 150 digital displays in the theaters, the ability to put the content onto the network and run a single CAT5 cable helps simplify the system.

“We have Visionary endpoints almost everywhere because Visionary allows us to take a signal from any location and transmit it to anywhere on the property,” Larose said.

Meanwhile, integration firm Solotech was selected for the design-build of the resort’s Zouk Nightclub, Ayu Dayclub and other restaurants and lounges. That includes myriad displays that are integrated with Visionary endpoints to help simplify control, says Aaron Beck, business development manager for Solotech, in a statement.

“The overall capability for Visionary to deliver the technology for these endpoints to be connected on one global network is incredibly impressive,” Peck said.