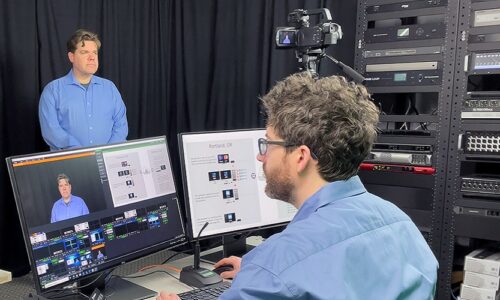 Underscoring the strong momentum of Dante AV solutions among OEMs, integrators and end-users in the global AV market, Audinate showcased OEM and ODM partnerships with Gefen and Cypress, and new products from Bolin. The Australia-based company also announced the release of Dante Studio software for video applications.

Patrick Porthe, director of marketing, Audinate, highlights the company’s AV strategy which consists of four pillars. These are hardware, software, cloud infrastructure and control and management. Based on this, Audinate launched Dante AV solutions into the market for integrators and end users.

According to Joshua Rush, chief marketing officer of Audinate, the Dante AV solutions are now gaining strong interest and adoption among OEMs, ODMs and their customers. “By seamlessly integrating and synchronizing networked audio and video, Dante AV solves a number of problems for integrators and customers,” Rush reveals. “It’s for this reason — and Audinate’s proven track record of growing a manufacturer-agnostic, interoperable ecosystem around Dante — that Dante AV is experiencing such positive growth,” he adds.

The company announced several highlights around Dante AV. These include:

Dante Studio is a platform solution for advancing AV production capabilities and streamlining workflows. Resident on this platform, apps from Audinate will provide integrators and end-users with professional-grade tools for better, specialized video networks. The first tool on Dante Studio, known as Dante Video RX, enables Windows PCs to receive video simply and seamlessly from any Dante AV-enabled source.

According to Rush, this introduction is actually a critical phase of building out the Dante AV ecosystem. He then remarks, “Dante Video RX completes the end-to-end video workflow — It complements the growing ecosystem of Dante AV hardware products including cameras, encoders and decoders. [And it] allows Dante AV signals to be easily ingested into PC platforms and software applications. [It] facilitates a wide variety of networked video use cases ranging from the video production and broadcast markets to corporate and higher education.”

Dante Video RX is easy to acquire and deploy says Audinate. Here, users simply download the Dante Studio installer and activate Dante Video RX trial license. Then, they configure their system using standard Dante Controller software. Dante Video RX runs in the background and facilitates use of high-quality video streams from anywhere on the network. Thus, the tool is especially useful for conferencing and educational applications.

Video feeds from a legacy camera can also be fed through a Dante AV encoder. This is then patched to Dante Video RX for high-quality conferencing, streaming and recording applications. Dante Video RX can also be used with OBS software or with other conferencing platforms to give a cinematic look to presentations, lectures and lessons. These include Microsoft Teams, Skype, Zoom, vMix or Panopto.

Audinate will also feature new tools within Dante Studio. This includes Dante Video TX, a virtual transmitter, and Dante Video Viewer, a virtual monitor. All are currently in development. The company expects to release them later this year.

“Dante Studio will be a complete ecosystem of AV network tools that customers can use to build workflows that best address their needs and aspirations. With Dante Studio, Dante AV users graduate from connectivity to signal control to workflow optimization and creative freedom.” Rush concludes.