This is the site in which an expert security integrator in the space, VIP Systems, approached, managed and delivered the level of technology and service that today’s modern builders and developers seek.

“We are a unique company that is capable of providing a complete engineering lifestyle system design and integration for large projects from luxury condo towers to municipal town and country-style developments,” says VIP Systems President Edward Genin.

“We provide not only typical low-voltage environment solutions but also full-scale new lifestyle environments that allow our customers to enjoy the new state-of-the-art technologies available today.”

This particular project was to encompass access control for the property, residences and common areas, as well as full smart home solutions for each unit, building A/V, fiber, telephone and television, public safety distributed antenna systems (PSDAS), a movie theater, gates and more.

Let’s take a closer look at this upscale property and its slick set of solutions, as well as the ingredients that has helped VIP stack up its integration triumphs.

“We focus on specific industries, which allows us to expertly serve the needs of that market,” says Genin.

“This focus gives us in-depth knowledge of risks and challenges our clients face so that we can provide the best possible solutions. Our capabilities range from an in-house engineering team for lifestyle system design/build on new construction projects to modernizing or expanding existing systems and infrastructure.”

In addition, the firm also offers everything from command centers to digital signage to POS systems to A/V to automated lighting and more.

“Since our inception, our company has been committed to providing the best quality engineering and integration services at a superior value.

“We have done a great deal over the years to implement and achieve our vision and maintain top quality, in-demand services. Our continuing pursuit of excellence is our primary and unwavering focus,” adds Genin, who joined VIP Systems in 2003.

Among the integrator’s high profile customers are Simon Property Group, Marriott Hotels & Resorts and The Ritz-Carlton.

Pelli designed the building and floorplans while Armani designed its amenities, common area spaces and residences.

“Residences by Armani Casa it is first-ever Armani residences in the world,” adds Genin.

“It was built for an exclusive class of buyers, set on the Sunny Isles Beach. It is the largest concrete pour that The Related Group has ever done.”

Completed in late 2019 with condo residences ranging in size from 1,358 to 6,138 square feet (one to five bedrooms at prices spanning $800,000 to more than $12 million), the tower offers views of the Atlantic Ocean, Intracoastal Waterway and city skyline.

In addition to the multitude of upscale features already detailed, residents of the building have access to beach amenities including food and beverage service, chaise lounges, umbrellas, and beach attendants.

Meeting the occupancy and safety expectations of affluent residents requires the lifestyle system design, deployment and maintenance of advanced technological devices and systems. In this instance, Residences by Armani Casa stakeholders sought solutions that included controlling site access control through the use of multiple credentials and access control for private elevator unit entry; video surveillance; full smart home connectivity within the units; and a site-wide upscale lifestyle environment.

VIP Systems had already been working with The Related Group since 2014 and that relationship helped it be selected for the Armani project. “A full bid was submitted and we were engaged in the project from its very initial stages,” says Genin.

“We provided engineering and design-build services after the budget was approved. The contract was finalized in 2015. It was a very intense design coordination because of Armani’s design team and with the coordination of device locations.”

VIP Systems commenced the installation in January 2018, taking roughly 20,000 man-hours to complete. All the work was overseen by the integrator in consultation with Armani Casa’s interior designers.

The end user had no input until the final few months of the project when building management took over from the developer. 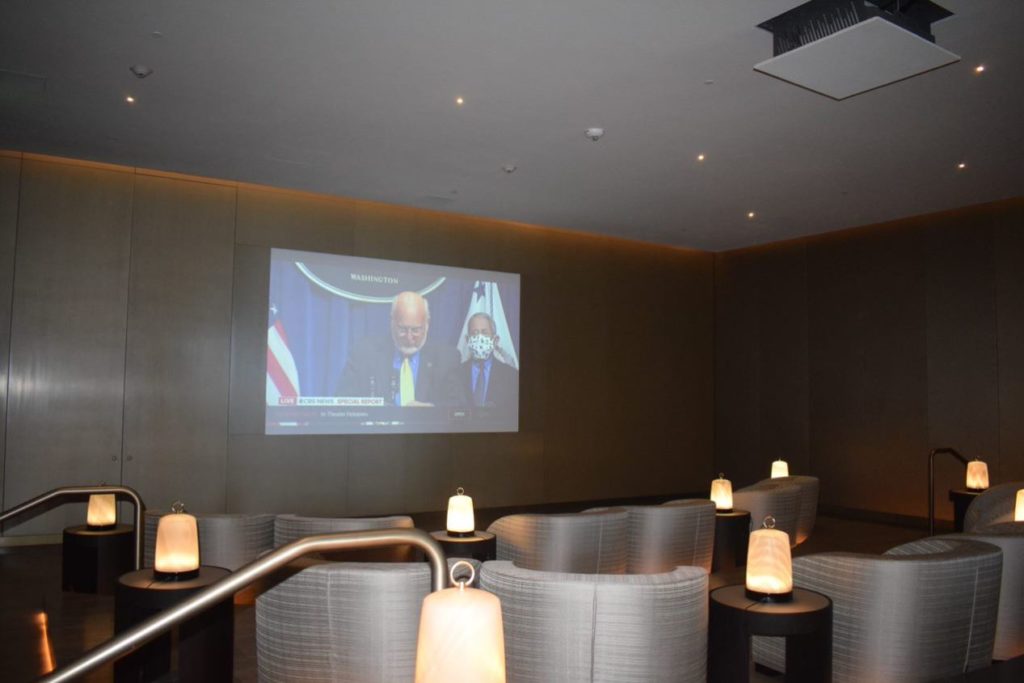 The access control portion of the project resides on AMAG’s platform.

HID multiClass RP40 readers were deployed in all locations except the interior lobby and mezzanine.

In those spots a custom card reader was mounted behind a custom glass faceplate to match the interior paint schemes.

The intrusion elements are integrated into the AMAG access and video management system, which is locally controlled and monitored by the building’s security officers.

For the video surveillance system, VIP Systems technicians installed 96 IP PoE Hikvision and Axis cameras within and outside the building. Most of the cameras were surface-mounted as, according to Genin, the options were limited due to confined spaces above the finished ceilings. The rest of the cameras were covertly mounted behind metal panels.

The infrastructure included HP Aruba switches for the security systems network, Cisco Meraki firewall and switches for the building IT network, and Hotwire along with a Ruckus access point for building Internet and WiFi. More than 2,000 feet each of 288-, 48- and 12-count fiber was installed, as well as in excess of 200,000 feet of Category-6 cable.

Five Altronix, six Schlage and more than 100 Securitron power supplies were placed to provide electricity to all the tower’s doors. Within the condo units are smart home systems and Google Nest thermostats. Those devices are fully integrated with the residences’ audio/video functionality.

The integrator also installed and integrated a complete A/V solution with two theatres, multiple TVs and seven zones of inside and outside audio. Elevator car operational panels and an air-conditioning building management system were also integrated into the solution. Lutron Quantum Vue facility management tool was put in place for lighting control.

A complete common area indoor and outdoor WiFi network was put online along with IPTV integration for the gym’s equipment. To preserve network integrity all the building systems were linked to a firewall appliance. 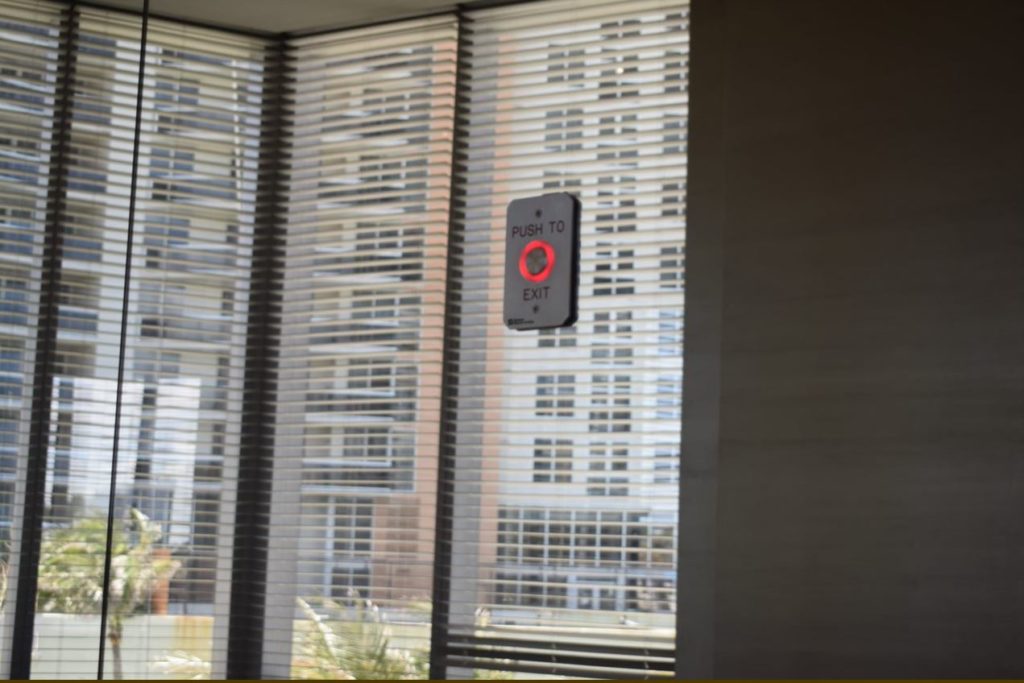 “These equipment choices were based on developer needs, costs and functionality with other providers in the building, specifically elevators. We worked closely with the manufacturers to enable as much integration as possible,” says Genin.

“This building is critically different than most and the interior designer had the final say in all aspects. There were local representatives but the international team had final say.”

As is to be expected on a project of this scale and scope, the integrator had to coordinate and collaborate with numerous other trades as well as contend with assorted compliance requirements.

For example, in addition to having to adhere to all NFPA and NEC regs as well as local AHJ requests, VIP had to meet Miami-Dade County’s windstorm codes. These needs were satisfied by working closely with the building and fire officials and performing inspections throughout the project.

“There was barely a trade we did not work with onsite,” says Genin.

The building management’s IT consultant was another key collaborator during the proceedings as VIP built out the local IT network and assisted in the configuration that included the point-of-sale (POS) provider, grow light vendor and electric charging provider.

The company also interfaced with the incoming onsite security professionals to modify the system so as to better adhere to their standard operating procedures.

To ensure the job went as smoothly as possible, VIP Systems personnel met constantly with all the players and engaged in detailed, frank exchanges. Those discussions were then carefully documented to ensure information did not get lost.

Naturally a project of this magnitude is likely to bring a unique set of challenges, some that can be anticipated by an experienced integrator like VIP Systems and some that would catch even the sharpest pro off-guard.

Navigating through it all hinges on being as well prepared as possible, taking a proactive and responsive approach, maintaining continuous communication with all relevant parties, honest transparency in all activities, and always looking out for the best interests of the client.

“The absolute most difficult part of the install was dealing with the limited space and interior designer. The interior designer was steadfast in having no compromise on final aesthetics,” reveals Genin. 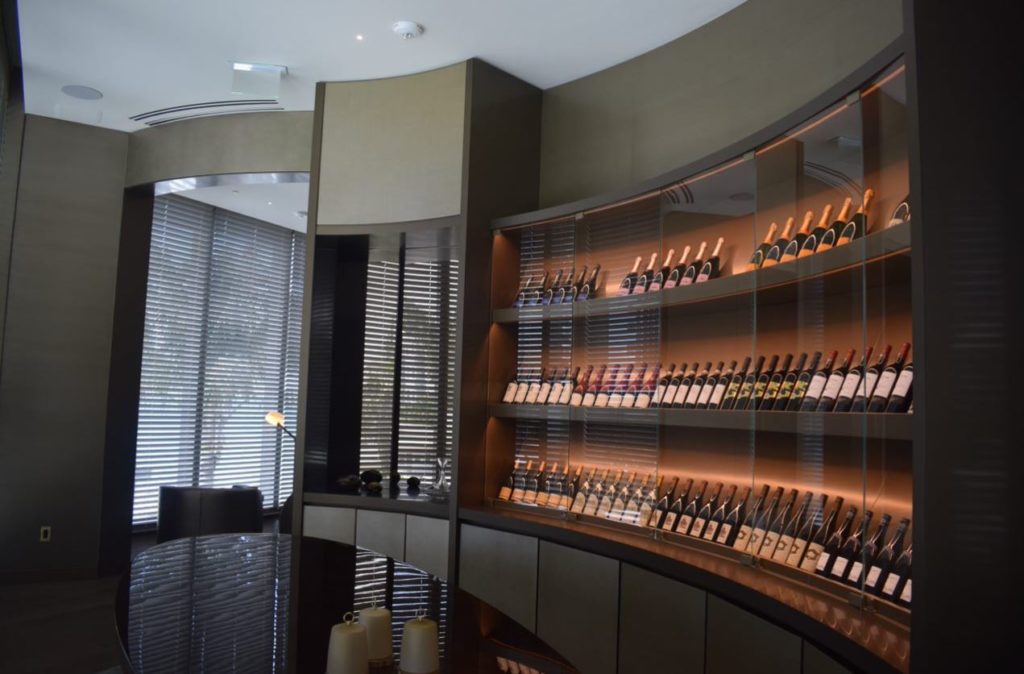 “Being remote meant answers could take some time and often the system’s functionality was compromised to save design intent. Often items above the ceiling had to be completely redone to satisfy a small interior design change.

“The saying, ‘Equal, equal, equal,’ came to be burned into all our minds, referring to the spacing and alignment of every device in the ceiling.”

Ultimately VIP Systems delivered just what management for the Residences at Armani Casa desired to keep their tenants happy and safe. The integrator continues to provide system maintenance both remotely and onsite. Although the security aspects of the solution have already proved their merit, keeping everything buttoned up remains an ongoing undertaking.

“There have been incidents,” Genin advises. “We assisted the relevant parties by providing logs and video. We also reworked certain aspects of the install following these events, which for privacy will not be detailed.”

In closing the book on another successful chapter in the ever-growing VIP Systems story, its top executive conveys how it’s all still a work in progress where there is always lessons to be learned and paths to improvement.

“The most surprising aspect of this project was the changes to layouts and materials so late in the installation,” reflects Genin. “After ceilings were up and painted we would have to move material. If I were to work with the designer again I would get material submittals locked in earlier, with signatures!”

This post premiered on our sister site, Security Sales & Integration.