It’s interesting to see what happens once you start to develop futuristic solutions: as you’re working your way towards one solution, you start seeing new possibilities. Our QuickSilver™ AV system development moved us to our patent pending Facial Recognition based media delivery development. That in turn moved us towards developing solutions for those new possibilities as an ongoing sequence of major changes to the way things used to be done, with fantastic possibilities for improving Customer Service in our world.

Our patent pending Facial Recognition based Media Delivery got us a long way off ‘just’ personalizing media delivery. Our original start to all this change was some work that turned into QuickSilver™, which then made it obvious that we needed something a lot more advanced than existing technologies to create a way to properly control all the features that QuickSilver™ offered to us. Initially, we developed an infra-red badge, as we were not that happy with RFID and Barcode type of selectors — neither of those options are ‘facing’, meaning to say that you kind of know where people are, but you have no idea where they’re facing or looking. That means that in a smaller venue with exhibits relatively close to each other, you really have no idea what your visitors are interested in. You can make them log in by scanning their barcode or RFID tag, but most visitors don’t like to ‘get out of line’ to scan their tag, and once someone has scanned theirs nobody else will come forward. This results in a situation where you have no idea who is actually looking at any given exhibit. Not only that — even if they do start a show or display, you don’t know when they walk away. That might not matter in conventional systems, but if the intent is to personalize media delivery, then the 3-5 year old kid version of the media story that might be running really should be stopped and replaced with the right content for the new visitor who wants to have adult content in French with a Science bias — but only if the child watching that version lost interest and has moved on.

In came our Infra-Red tag, developed specifically to deal with those kind of circumstances and to make sure that things would just work better when it comes to management of personalized media delivery. The intent of the IR tag was to hang them on a lanyard around visitors’ necks, so that we at least knew where the body was pointing which in turn would give you a good idea where the visitor would most likely be looking.

The IR badge was designed so that we could have a lot of them in a space simultaneously, and so that we would be able to detect multiple individuals in the space at the same time, and hence personalize experiences and deal with groups of people too. Then, when it came to finalizing the design for the badges, and figure out the final cost per unit, we concluded that we really didn’t want to deal with charging and chargers or with managing the badges: getting them back from visitors, providing staff to handle/clean them, charging them and so on is just something museums, theme parks and visitor centers don’t like to do.

It became obvious that we needed to find something that we didn’t care if visitors left with, and something that would take zero effort in terms of maintenance by venue staff. A moment of inspiration led us to Facial Recognition,  so that zero effort on behalf of the museum or other venue would be required. Now we needed to make Facial Recognition work.

There are two ways to accomplish what we were after. The first, and simpler method, is to take videos and / or images and to send those to a provider such as Amazon, Google, or Microsoft. This method is relatively slow, and might be fine for surveillance, as you will receive identifiers back for the people you ‘see’ within 10-15 seconds or so (depending on a number of variables including internet speed). However, with that kind of detection speed of visitors, they’ll be in the next gallery before we get a chance to personalize their media, so that is clearly not the way forward in our industry. We also did not want to get involved with the stigma of what might happen with that data as it is being moved around the internet to these huge companies.

The second way, where we do all the recognition locally, made us a lot happier. Not only do we keep control of ALL the data at all times, we created a system that does not need an internet connection, so that privacy issues vaporize. It also gives us a response measured in a fraction of a second, which means that we can start delivering media to a visitor as they’re walking up to an exhibit resulting in a high speed, very natural feeling interface.

This, coupled with QuickSilver™, allows us to create systems that can cope with any number of languages, and any level of further customization: we can deliver media for mom’s Science preference, dad’s History version, and for kids of different ages by delivering appropriate versions while also dealing with English, Spanish, French, German, Dutch, Chinese, Korean or Arabic – in short, pretty well anything anyone might want.

This new freedom and capability started a thought about how we could leverage this technology to provide even more benefits to potential clients, visitors and guests, and that is when we started looking at a concept that resulted in what is now our LookingGlass Concierge system, based on patented technology that uses Facial Recognition to locate visitors in a space. LookingGlass Concierge is the ultimate system to create superior customer service in locations ranging from theme parks to museums, shopping malls, cruise ships, airports and entire cities, with even further applications in areas such as the health and senior care industries.

Once you know where people are, you can send mom or the chaperone a message when one of the kids has strayed in the park, long before they’ve even realized that something is wrong. That message can tell them exactly where the missing child may be found. You can buy things in a shopping mall or theme park, and not worry about having to carry it with you all day — you’ll pay, but only collect it when leaving the venue (“please collect your purchases and winnings from locker #55”). It allows you to control drink re-fills, deal with VIP lines, membership benefits and allows us to offer a cruise line bar visitor their favorite drink after greeting them by name. Options are endless, and this is the area where our patented technology will come into its own and create seamless and high-level customer services that have never before been seen. The future is a different place! 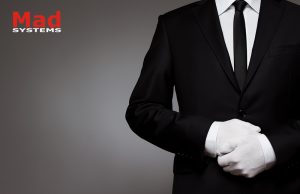