The event at the Qatar Foundation in Doha required an installation of 60 Claypaky K-EYE K20 HCR LED wash lights to illuminate Penrose House in Education City.

The Inuit-inspired Anooki characters were created by David Passegand and Moetu Batlle, founders of French interactive design studio Inook. The playful, parka-clad boy and girl spawned a brand and have become stars of video-mapped shows worldwide.

The environmental sustainability theme of the show in Qatar was particular close to the characters’ hearts: Their creators explain that since the Anooki’s house was melted by global warming they now travel the world discovering different cities.

The Anooki event spanned six days and was open to the public who pre-registered and observed COVID-19 protocols. Six-meter-high inflatable Anooki characters were also installed around various Education City buildings.

It’s estimated that more than 7,500 people participated in the experience during its run. 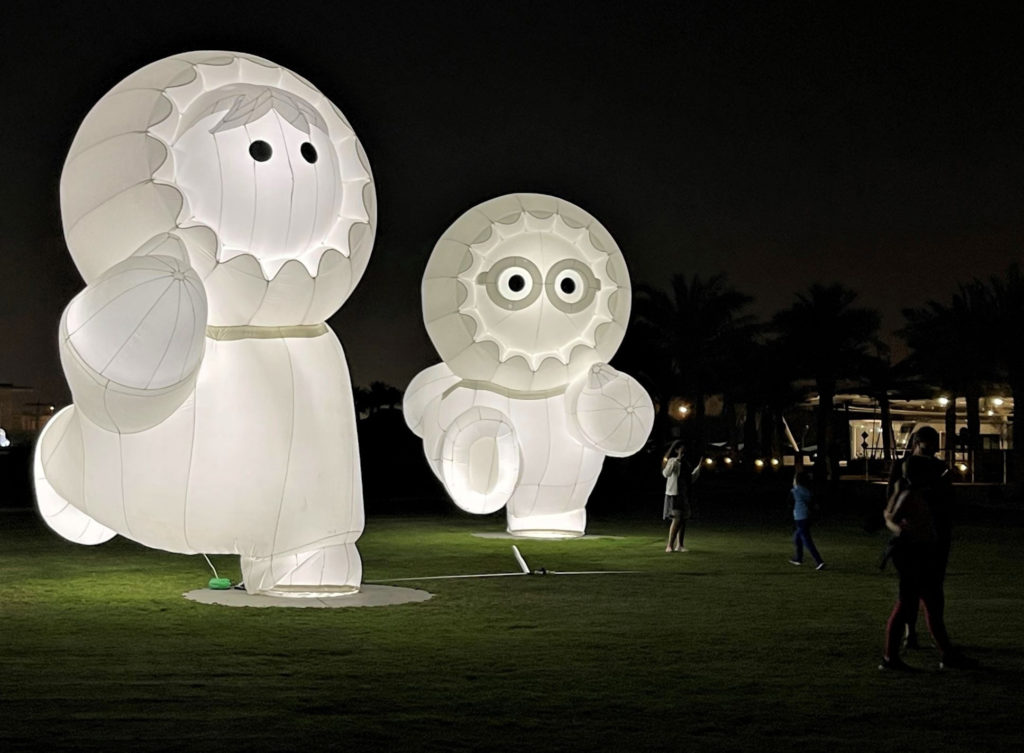 Lessons Learned from the Anooki

For the show, the Qatar Foundation was transformed into a nighttime playground for the Anooki despite the pair’s serious environmental message.

When the Anooki star in their award-winning projection mapped shows the animated characters play with the architecture of a building and react to the musical score doing things like racing across and climbing façades, peeling walls like old wallpaper, trampoline bouncing on balconies, opening windows, and crumbling stonework then reconstructing it again.

Here the Anooki fly and dance their way across the expanse of the Penrose Building’s decorative façade; they dodge dangerous cracking ice and spurting water and scale hopeful leafy green garlands.

“Working with lights in a projection environment is a very tricky subject because the lighting designer is always trying hard to achieve the right lighting level without effecting the projection quality on the same surface,” said Sharif Hashisho, managing director of Qatar Vision.

“For this reason several days of programming were required by the lighting and projection teams to achieve the level of satisfaction they desired. Colors were also an important factor: Bright colors will always fight against the projected image,” he said.

“That’s why most of the colors used were warm and dark so they did not interfere with the projection content,” said Hashisho.

The main purpose of the lighting installation was to create a warm wash on the building’s entire façade, he said, as well as synchronize with the show content and music during segments with strobe effects and some iris and dimming effects.

“The K-EYE K20 wash lights we used for the Anooki project created an even, amazing wash on the façade of the building like a true paint,” said Hashisho.

The Penrose Building’s façade is composed of two architectural layers with approximately 1.2 meters between the actual building wall and the front decorative cladding.

Sixty Claypaky K-EYE K20 HCR fixtures were positioned between the inside wall of the building and the front, all of them hidden to the audience watching the show.

“In order to make our installation much more efficient, we rigged several trusses in between the two building layers so the lights could easily be mounted on them,” said Hashisho. “Other lights were also installed in front of the Penrose Building to create a full wash of the decorative façade whenever needed.”