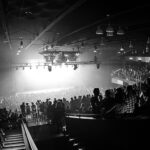 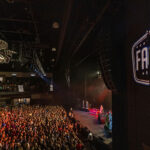 The Factory, which anchors a new entertainment and dining destination known as The District in the St. Louis suburb of Chesterfield, recently installed the L-Acoustics PA system. According to the venue, merits of the system included attracting top artists and negating the need for them to bring in their own production. L-Acoustics, is of course, the France-based developer of innovative sound systems and technologies.

The Factory is a recently-opened 52,000-square-foot venue. It can hold between 2,350 and 3,400 concertgoers or event attendees on a flexible dance floor and fixed-seating configurations that face a 60-foot-wide stage.

“The Factory is built on the most valuable real estate in the region and there is no wasted or extra space anywhere in the building. So we had to create a sound system that no one could ever say no to,” observes Chip Self, president and CEO of Logic Systems Sound & Lighting, Inc.

The St. Louis-based systems design and integration firm thus supplied the new L-Acoustics system which provides complete coverage for every audience member regardless of seating in the large performance hall.

Features of the L-Acoustics System

The L-Acoustics PA system has one dozen K2 loudspeaker enclosures atop two Kara II down-fills comprising the left and right main array hangs. These are buttressed by two A Series enclosures per side as in-fill and out-fill, respectively; six eight-inch coaxials used for front-fills; and four A10i Wide speakers for delay.

A powerful subwoofer array comprises 12 KS28 subs set in a purpose-built concrete pit under the stage. It is deployed using a proprietary filter set that allows the sub array to cover more evenly side to side. A combination of 14 LA8, three LA12X, and four LA4X amplified controllers power the system. This is managed by an L-Acoustics P1 processor and connected via an L-Acoustics LS10 network switch.

The firm also underlines the monitoring system for the stage. Here, one dozen X15 HiQ wedges are surrounded by two A Series systems and two SB28 subs per side. Plus, there are two more SB18m subs just for the drummer.

“It’s a big system, and it has to be because it was meant to accomplish several important things,” Self says. He adds that it has to cover every seat in the house regardless of the room’s configuration for concerts or events. Moreover, the system has to be sensible. Self continues, “…We designed it to hang from motorized trolleys, which lets us move the main speaker arrays, as well as the on-stage lighting trusses, to alternate locations or completely out of the way of the touring act’s system—if needed—all at the touch of a button.”

According to Self, the L-Acoustics system offers total flexibility without compromising on quality.

Per a statement, the L-Acoustics system also an interestingly designed one. The extreme width of the stage meant that the two main PA hangs are 68 feet apart. This is as much as 20 feet wider than most designs would call for. Moreover, some other systems might require an additional two hangs closer to the center of the stage or an additional center cluster. However, these solutions could have negative aesthetic, sightline and budget implications. They could also potentially cause time-alignment issues. Thus, Self saw a much better answer in the L-Acoustics A Series speaker used as an in-fill.

According to Self, the center-cluster solutions creates more problems than it solves them. However, he proclaims the A Series enclosure solves it elegantly by citing the speaker’s narrow and tight horizontal dispersion pattern. He remarks, “Any wider, and it would overlap with the rest of the PA or leak back onto the stage. As a down-facing in-fill, the loudspeaker actually feels more like an extension of, an integral part of, the main PA rather than a fix for it, and without losing any of the stereo imaging for any seat.”

Self adds that the extensive PA system and monitoring setup also has an economic component to it. “We’re coming out of a difficult period in live-event and concert production, and venues are going to be competing for shows,” he remarks. Self then explains that with L-Acoustics system, The Factory eliminates the need for touring shows to carry their own sound. This can help save substantial amount of money at a time of shortage of trucks and drivers, and increased transportation costs. Self adds, “A high-quality sound system like this one [then] becomes part of the negotiation process.”

Benefits of the Installation

The L-Acoustics system at The Factory is on a full-service lease with ongoing maintenance and operational support from Logic Systems as part of the package. This brings out another economic aspect of the system. Self says this approach to capital financing is a good move for the venue, his business and the brand.

Self explains that under the terms, the venue will get a new L-Acoustics system every five years. Thus, it “will always be at the leading edge of the technology.” He then adds, “That means the system will also be in the best possible shape for its entire term. The venue doesn’t have to try to wring every last cent of ROI out of it and then hope for a good price when they sell it. That’s a win for them, us, and for L-Acoustics.”

Brian Carp, COO of The Factory, is an industry veteran. To him, the choice of a sound system was “extremely important, even critical,” to the success of a venue. He remarks, “You want to make sure you are as rider-friendly as possible when it comes to lighting and sound. You want to make a great first impression for visiting bands, and you also want to give that same experience to the fans. The L-Acoustics K2 does all of that and more.”

Carp also proclaims that the vision for The Factory is to provide a live entertainment space for the entire St. Louis region. He then lauds L-Acoustics’ and Logic Systems’ support for the system and the venue. “You want to feel like your vendors are also your partners, and that’s the case for both of them,” he concludes.

Click on “View Slideshow” on the upper-right corner for all images of The Factory.