This year’s Super Bowl again included a number of Shure products to help bring quality audio to the more than 100 million viewers worldwide.

With fewer fans in attendance due to COVID-19 restrictions, viewers might have heard more of the game audio than in the past. Shure played a key role in the entire Super Bowl Sunday lineup of activities.

The Super Bowl TikTok Tailgate featured a live concert performance by Miley Cyrus, who used the Shure 565SD Classic Unisphere vocal microphone. This dual-impedance, unidirectional dynamic microphone was made famous for its use at Woodstock.

She shared the pre-game stage with guests Billy Idol and Joan Jett, who used KSM9 capsules and were on the Axient digital wireless system.

Related: What Was Up With The Super Bowl Halftime Show Audio?

Gorman’s poem, “Chorus of the Captains,” celebrated and introduced the three honorary captains who were specially invited to the game by the NFL based on their exceptional service.

For the game itself, head referee Carl Cheffers wore a redundant system custom built by ATK/Audiotek, using a pair of the TwinPlex TL47 subminiature lavalier microphones and two Axient digital wireless bodypacks with receivers setup for both Quadversity and Frequency Diversity.

They were deployed for the game by Professional Wireless Systems (PWS). 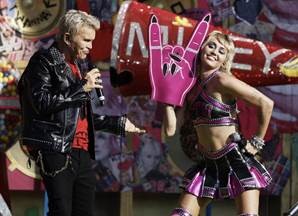 Quadversity is a patented technology that leverages four simultaneous RF inputs to feed a single channel. In hostile RF environments like the Super Bowl, Quadversity increases signal stability and can extend the coverage area of a microphone.

Frequency Diversity is a feature that utilizes a simultaneous secondary frequency as back-up in case the primary frequency is compromised – giving even more protection in mission critical applications.

Jack Bowling, Super Bowl game stadium FOH engineer for ATK/Audiotek, has specified TwinPlex TL47 lavaliers for the referees for the past three Super Bowls, as well as for L.A. Rams and L.A. Chargers games.

Both Eric Church and H.E.R. sported Axient Digital Frequency Diversity handhelds for the National Anthem and America The Beautiful, respectively.

Axient Digital also played a key support role for Walter Payton Man of the Year presentation. The wireless provider for entertainment was ATK and the subcontractor was PWS.

“During these COVID challenged times, it was important to CBS Sports to minimize touch and person-to-person contact,” said Michael Mason, president of CP Communications.

“It’s always an honor for our products to perform on one of the biggest world stages,” said Rick Renner, director of U.S. pro audio sales for Shure.

“From the pre-game show, to the game itself, to even many of the commercials in between, Shure provides various audio components to bring the sounds of one of the biggest nights in sports to fans worldwide,” he said.