For about as long as there’s been an AV integration industry, it’s been largely the domain of proverbial “old white guys,” many of whom came from a pro audio background. It’s an industry that’s struggled to attract young people because those in power don’t always explain well what they do.

But John Laughlin and his leadership team at Conference Technologies, Inc., in St. Louis are trying to change that, putting a heavy emphasis on infusing the industry—and their company in particular—with youth, then teaching those employees what they need to know to be successful in their chosen field. 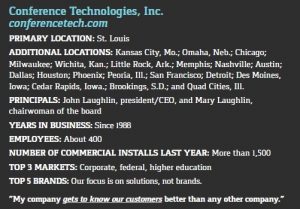 That approach is just one reason Conference Technologies is among the fastest-growing companies in the AV integration world, with 18 offices around the U.S.—and the opportunity to add another one never far from Laughlin’s mind.

So, while Laughlin ensures all new employees are armed with Nerf dart guns as part of their initiation kits inside their CTIUniversity backpacks—and isn’t shy about ambushing them on their first day to break them in to the CTI culture—he also knows the importance of making sure the people who work there know what they’re doing.

“Educating our staff is one ofthe most important things we can do,” says Laughlin, president and CEO of the company with about 400 employees. “We want to help them to be amazing in life.

“Teaching them how to install a projector is important, but there are other things that can be more important, like driving and starting a 401(k),” he says.

That’s where CTIUniversity comes in.

“We want individuals who invest in themselves are always looking to learn something new. We’re hiring super-young and making a commitment.” —John Laughlin

CTIUniversity courses are also offered to customers, says Laughlin, as a way to increase the value the company can offer them.

“We’ve been growing so fast so we needed to be able to train people faster,” says Cathy Kelly, chief strategy officer at CTI and the point person for most CTIUniversity courses.

“We were having a hard time educating our people. But when you learn at your own pace, usually you respond better.

“It’s our strategy to hire people who are super-young and let our competitors poach their employees from other companies,” she adds.

Laughlin, for one, is surprised at the success and popularity of CTIUniversity training.

“We soft-launched CTIUniversity last year thinking no one would be interested,” he says with a laugh.

The initial launch featured incentives like gift cards for those who finished the most courses. Today, CTIUniversity features outside training incentives, such as CTS renewal credits and more.

In part because of the wide array of offerings through CTIUniversity, employee satisfaction surveys show that job satisfaction in the first 90 days is going up steadily.

“If you want us to invest in you, we want you to show that you’ll invest in yourself,” says Laughlin. “We want individuals who invest in themselves and are always looking to learn something new.

“We’re hiring super-young and making a commitment,” he says.

“We don’t want to look like the rest of the companies in the AV integration industry,” Laughlin explains.

“It’s very difficult to find someone who’s loyal to your culture who’ll fit in. And, if you try to poach someone we want, we’re going to match what you’re offering them on the spot.”

Laughlin runs CTI with a simple philosophy: “Be mission-driven, whatever that is for that company, for alignment. Treat your people well and empower them to run with that solid foundation.”

He generally steers clear of unemployed AV integration industry veterans when CTI has jobs to fill.

“If you’re available in the marketplace with a lot of experience, there’s usually a reason why,” says Laughlin.

CIO Brandon Conick says CTI leadership is “able to make good evaluations on how they’ll fit in culturally.” Sure, they make mistakes sometimes, but they learn from those and move on from them quickly.

“Mistakes make great lessons, and avoiding them means you are too content, which is the biggest mistake of all in this evolving industry,” says Laughlin. “Make mistakes early and fast, and correct the issues that arise even faster if you want to improve.”

Chief design officer Matt McNeil says he’s focused on an applicant’s aptitude and believes they can be coached if they have one that matches what CTI wants.

“If you can coach them to success, they become more loyal,” he says.

CTI’s turnover rate is “significantly lower” than other AVIXA, NSCA and PSNI Global Alliance members, says Laughlin, “because of the amount of development we put in.”

“If you try to poach someone we want, we’re going to match what you’re offering them on the spot.”

It’s important, he says to “have flexible policies with empowered employees who understand the business and goals.”

“We put in a tremendous amount of time on the front end to ensure they’re a good fit,” he says. “We believe every person wants to be successful at work. It’s our responsibility to find the right fit so they can be successful.”

CTI’s biggest challenge as it continues growing, says Laughlin, is “adding talent fast enough.” He’s always focused on “continuing to build our talent pipeline so we have employees who know our customers, our philosophies and culture, for growth.”

And if the fit isn’t ideal right away, Conference Technologies often will find a new way to utilize these new employees, assuming of course they show a willingness to try something new.

“We do a good job of letting people show what they’re good at,” says Conick. “Once they do that, we move them to where they’re comfortable.”

And, don’t let the Nerf dart barrage fool you. This isn’t a hostile environment.

“We hate sticks and love carrots,” says McNeil, explaining management tries to motivate employees to succeed rather than punishing them if they don’t.

No Managers: Everybody is Accountable

You won’t see the word “manager” on CTI’s org chart, says Laughlin, other than for project managers “because the AV integration industry demands it.” Instead, management is charged with being coaches who “empower and inspire” others, he says.

There are no secrets whatsoever when it comes to employee performance at Conference Technologies. 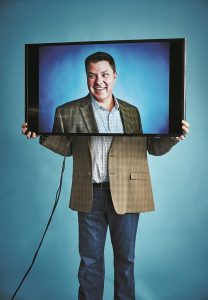 The company uses live digital signage boards in each office to track key performance indicators for groups and individuals. Some KPIs change daily, while others are updated monthly.

“Everyone knows where they stand,” says Laughlin. “And their teammates hold them accountable when they see they’re falling behind.” There are medals, pay increases and company-wide emails to celebrate those who achieve highest.

“We foster a culture of winning,” says McNeil.

And that winning isn’t only about KPIs and finding the next marquee job for CTI. It’s also about having a quick trigger finger ready at all times when a Nerf dart gun war breaks out.

“It’s pretty common for someone from our leadership team to break down the door and let [our new employees] know who’s boss,” says Laughlin with a laugh.

McNeil calls it “a way to let off steam” in a high-stakes environment that sometimes sees leadership team members cooking pancakes for their employees, hosting barbecues, engaged in paint-ball battles and more.

OK Staying Under the Radar

Laughlin doesn’t like talking publicly about CTI’s projects or its customers. He’s fine leading a company that lives somewhat in the shadows and sneaking up on others who may not have heard of CTI but have likely seen their work if they look hard enough.

Service agreements, says Laughlin, are a strategy for CTI because “our customers see the value.” 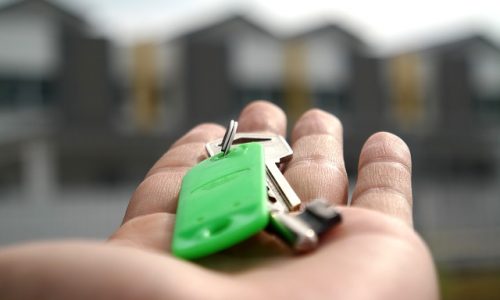 Related: Passing the Torch (Without Getting Burned): Finding the Right Succession Plan for Your Pro AV Business

“It means they have regular check-ins and are efficient in their meetings and operations that help make them more profitable,” he says.

Laughlin doesn’t see any end in sight to CTI’s growth 30 years after the company launched. He expects to focus on organic growth, but certainly wouldn’t turn down the chance to acquire another company if the situation was right.

CTI has completed 10 acquisitions within the last decade, an impressive total for a company with such a heavy focus on cultural fit.

“It has to be the right fit in the right location with the right leadership,” says Laughlin. “When they’ve already demonstrated success, you can take more risk in taking them on board.”

Not all CTI’s acquisitions have worked how Laughlin had hoped, but he doesn’t call those “failures.” He refers to them as “disappointments.”

All new employees start in the headquarters office in St. Louis for their first week for orientation and training, says Kelly.

“Ultimately, all of what we do is about our ability to deliver better value to our customers,” says McNeil. “We want our customers to have a great experience with employees who want to come to work.”