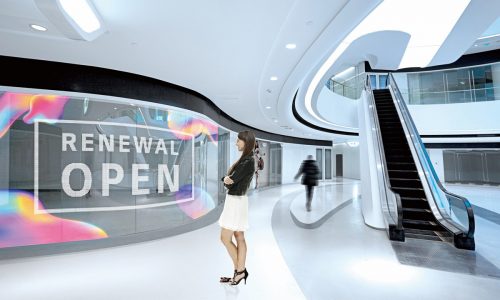 According to a press release, 3D transparent technology ClearVue 3DP is achieved with transparent LCDs “attaining a completely unique transparent experience” — combining an Ultra High brightness LCD with Transparent LCD, using “polarmatch” technology to achieve a positive parallax 3D environment in which to immerse a customer in a brand message.

The manufacturer says it achieves the unique effect with some strategic engineering.

The high brightness panel and Transparent LCD have matched polarizers and work as a pair to create 3D content. The concept allows you to have an active background image, as well as a Transparent LCD working in combination.

As an example we have before used a 48-inch high brightness LCD with 2,000 cd as the rear panel paired with a Transparent LCD with matched polarization approx. 180mm in front of the high brightness display.

This amazing new concept opens up so many new opportunities in design and project creation.

Not only does it look fantastic but it means a backlight showcase box is no longer essential for Transparent LCD installations which some customers have been struggling with for years due to capabilities and space issues.

Crystal Display Systems says ClearVue 3DP has already been tested in the field.

“A number of clients have used this concept so far, with a number at development stage,  to create immersive displays with the most incredible and fantastic ideas,” it writes in the press release.

CDS cites and example of ClearVue 3DP having been deployed at the Harris Innovation Center in Florida.

“It has been tremendously well received and has even been described as the most talked about experience at the center.”

The technology is not restricted; customers can even put a product between the two displays needed, according to the press release.