In the first installment of Commercial Integrator’s three-part series on women in the integration industry, we witnessed women taking a stand to have their achievements and expertise within and outside the industry recognized. They also advocated for the inclusion of women in senior-level positions, as well as at the grassroots level. Moreover, each of them touched upon the relationships they’ve forged with other women in the industry. They also explored the fact that most of those relationships resulted from various organizations’ gatherings, as well as through mentor-mentee connections. Indeed, having a mentor in a historically male-dominated industry like commercial AV serves as a huge pillar of support for women.

Related: Earning A Seat at The Table

Continuing our celebration of the powerhouse women in our AV industry family, Commercial Integrator sat down with three powerful female leaders who, in addition, have served as inspiring mentors to the women in the AV workforce. This month, we speak to Johns Hopkins University’s Erin C. Maher-Moran, QSC’s Cory Schaeffer and Listen Technologies’ Maile Keone, all of whom expound on their journey and what it takes to command the table.

It seems to be common knowledge that nearly everyone in the AV industry discovered their career path by accident. For 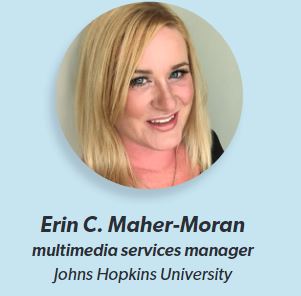 Maher-Moran, multimedia services manager of the classroom audiovisual technologies services department at Johns Hopkins, the journey was no different. She remarks, “I started off with a work-study job at my university where I pushed TV carts and helped set up projectors. At that time, I didn’t realize I was the only girl, as my university had a [substantial] majority of males back then.” Maher-Moran continues the story, saying that she came to occupy her previous supervisor’s position after graduation and, eventually, found her way to Johns Hopkins. “I’ve been here [at Johns Hopkins] for about 18 years, and it has been higher-ed AV all the way,” she exclaims.

Schaeffer, currently director of alliances and ecosystems at QSC, also fell into the commercial AV industry. She recalls, “In college, I took an entry-level marketing position at a company. I learned that marketing was not a fit for me personally; yet the company was [a fit]. And, today, the company is called ClearOne.” During the following 13 years, Schaeffer steadily rose from the entry level, coming to head an entire division herself. “From there,” she goes on, “I moved on and ended up starting a company [Listen Technologies] with two other people I used to work with.” 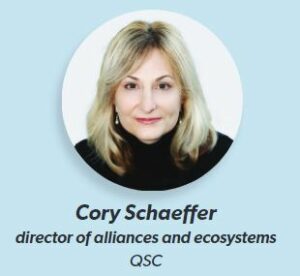 For Schaeffer, starting a company from scratch was certainly an exciting experience. However, after nearly 18 years, she realized that her ambitions were drawing her in a new direction. “I chose to step out of that because I wanted one more experience,” she emphasizes. Bearing that in mind, Schaeffer joined QSC in 2015, and she has been with the company ever since.

Keone, president and CEO of Listen Technologies, had a slightly different experience. Boasting a background rooted in technology, she entered our industry as vice president of marketing at Listen Technologies. “I was deeply steeped in technology, but not in AV,” she explains. “So, I [came] in as an outsider from the software industry.” Naturally, Keone’s first instinct was to learn more about her new industry home. “I took a bunch of AVIXA courses to understand the industry I had stepped into,” she says. 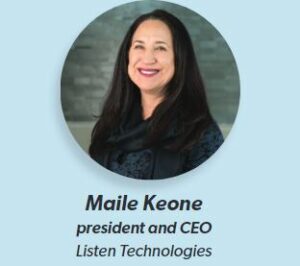 Keone then highlights when she took the proverbial bull by the horns to rise up even further. “When our vice president of sales left, I went to my boss and told him I wanted that [position] in combination with my [current] job,” she recalls. “I gave him a two-minute pitch on how I’ve been in sales and how sales and marketing align with each other.” According to Keone, she initially began the position on a temporary basis, but she soon became the chief revenue officer. In that role, both sales and marketing reported to her. Ultimately, that led to her becoming president and CEO, her ascension to which she considers her greatest achievement.

Schaeffer and Keone emphasize that these positions didn’t just fall into their laps; instead, they had to ask for and demand them. Essentially, for women who seek opportunities like these, they must be willing to create those opportunities for themselves.

Transitioning from a position at one level to a higher-level position isn’t an easy task for women in our industry or any other. In fact, it often involves learning to manage fear in order to seize opportunity. Keone further reflects on her experience requesting the vice president of sales role. “When I was walking from my office to Russell [Gentner]’s office,” she recollects, “I was literally terrified. [Being] at the office itself was hard, but between those five feet is where I had to manage my fear of rejection and ask for what I wanted.” Keone stresses that women must overcome that kind of fear and take those chances. She wisely advises, “Once you figure out how to go for it without letting the fear stop you, there’s nothing you can’t do.” 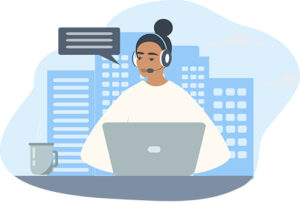 Schaeffer echoes the message of taking initiative, saying it leads to change. As an example, she cites local AVIXA Women’s Council groups whose purpose is to diversify our industry community. “This industry is [still] too male dominated, and it doesn’t have diversity,” Schaeffer says. “The best way to change that is not to wait for somebody to do it; instead, look at what I can do with my little part. And every little thing we do creates more change.” Thus, she advises, “Get your seat at the table instead of waiting to be invited. And if you’re unsure of how, ask around because that gives you a roadmap of your career growth.”

For Schaeffer, participation also means a lot, especially for those in leadership roles. She explains, “Imposter syndrome is real, but you’ve been invited into the room for a reason. So, put yourself out there and participate!”

It is paramount for women to drive the changes we seek. However, companies likewise must take responsibility and provide opportunities for women and others from marginalized groups. From a hiring perspective, Maher-Moran admits that she feels an extra sense of responsibility when considering female candidates. Maher’s team currently has 6 employees — four males and two females including her. She speaks on the hiring of her two male employees and one female employee. Acknowledging that it takes a conscious effort, she adds, “I made it a point to pay a little extra attention to prospective female employees because I wanted a wider perspective, as opposed to the typical perspective. I ensured that I put my unconscious bias aside and really dug deep to find the right person.”

As crucial as it is for women to create opportunities, it remains a daunting task. As Schaeffer puts it, essential encouragement comes from having mentors who provide guidance and support throughout females’ careers.

The Importance of Mentorship

When asked about the importance of mentorship, Keone states that one of the biggest misconceptions is that women should only have female mentors. She asserts, “[Many women] think they always need another woman mentor, but what you really need is a blend of mentors. You need people who are your peers and leaders. [This] gives you a variety of experiences and a different angle, as well.”

Schaeffer echoes that sentiment, noting that mentors can be incredibly supportive and helpful, irrespective of gender. “When I look back at my career, I didn’t have any women mentors until very late in my career,” she says. “I had three [male] mentors, and one of them was actually my husband!” She recounts her experience pursuing a professional mentor, which she found in Dave Bright, president of Kramer. “To this day, we still check in and chat with one another,” Schaeffer says, beaming. “Another mentor who was really kind and great to me was Ron Camden from Biamp. These past few years, I’ve leaned on Brandy Alvarado-Miranda because we’ve established a relationship based on openness and she has many skills that I don’t have, which is great to have in a mentor.”

However, all three interviewees commend the rise of female mentorship in the AV industry. Maher-Moran proclaims, “As someone who always had mentors [who were] men, I love that, as a woman in AV, I can be that mentor for someone.”

Schaeffer adds that it’s a big responsibility to establish strong relationships with other women in AV. She notes that mentorship is not just about complimenting but also about learning how to impart constructive criticism. “Not a lot of people will hold us accountable, but we can do that for each other,” Schaeffer states.

Keone remarks that she considers mentoring a valuable aspect of being a woman leader in the AV industry. She says, “I love to mentor and teach because I feel that, for true success, you need to be constantly learning.”

Maher-Moran underscores the importance of women leaders and executives being represented at webinars and on discussion panels. She cites this as having an inspiring effect on up-and-coming professionals. “One of the things I’ve taken away from being on [such panels],” Maher-Moran begins, “is realizing that I have something to say and that everyone — but especially women — actually want to listen. A lot of these women also have something they want to say.” She goes on, “I hope that, as we continue to provide those opportunities, we get to hear those voices, too.”