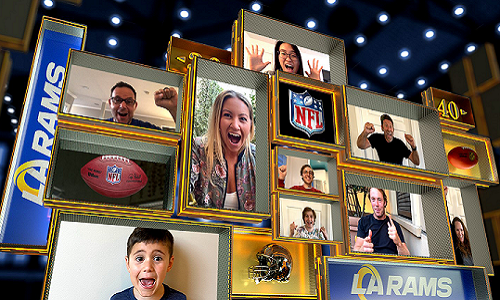 A Fan Mosaic will be installed at the end zones for select NFL games. Photo: Microsoft

NFL football is finally back, and like the NBA, Microsoft is chipping in to provide a virtual fan experience and help make the season entertaining without physical fans in stadiums.

Microsoft, already a partner with the NFL on sideline technology with Surface devices and Microsoft Teams, is deepening that partnership and helping to create virtual experiences that bring fans to games when they can’t be there in person due to COVID-19.

Without disclosing the manufacturer or integrator involved, Microsoft said the company and the NFL are teaming up on what they’re calling the Fan Mosaic, an LED display featuring a feed of virtual fans installed at each end zone.

For each home, the home team will invite select fans to a virtual VIP experience in which they can watch the game via a Microsoft Teams meeting. Fans will see a dual screen display of the live game next to a gallery view of other virtual fans. Each fan video feed will be isolated and mixed into the display. Audio from the meeting will be mixed with augmented crowd noise customized for each stadium, according to Microsoft.

Another new feature to this year’s NFL season is the Bud Light Showtime cam in stadiums that will help connect players and fans after scoring touchdowns.

Players can’t dive into the stands or high-five fans near the field, but they’ll be able to connect and celebrate with fans on the LED Fan Mosaic.

Read Next: How Video Boards and UC are Helping the NBA Connect with Fans

“And with the new challenges ahead of us this season, Microsoft will be instrumental in helping us innovate the best possible experiences for our players, coaches, officials, and fans, through activation like the Fan Mosaic and the Bud Light Showtime cam.”

Microsoft provides similar technology to the NBA, which is making use of LED screens and Microsoft Teams for a nearly identical virtual fan experience in the Disney bubble.

Aside from display technology, Microsoft is helping the NFL cope with the impacts of the pandemic by making better use of Microsoft Teams to help reduce the number of staff needed at each game.

Teams will be used to virtually manage operations for all games before, during and after the game.

Microsoft and the NFL are also continuing to use Surface tablets during gamedays.