Back in the days when Julian Phillips was managing director at U.K.-based AV integrator Impact, he was looking for a New York-based partner that would allow Impact to offer the banks and other large clients achieve their dreams of establishing worldwide presences with the help of the pro AV industry.

A little more than a decade later, Phillips is excited to be celebrating the 10th anniversary of the Global Presence Alliance, a worldwide consortium of 28 AV integration firms who have helped each other have a global footprint without ever worrying about leaving their own home countries. 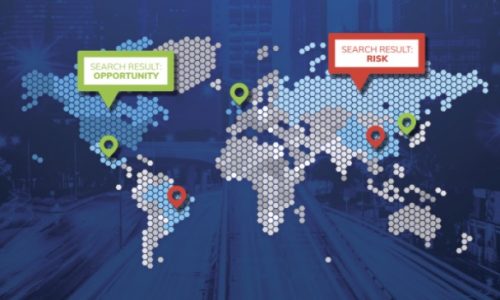 Related: Why Is Global Expansion So Popular for Large AV Integration Companies?

The Global Presence Alliance will host a formal celebration of the worldwide entity next month in Las Vegas at InfoComm 2018, reveling in their successes but also focusing on how much more work they have to do to continue building the alliance going forward.

In addition, GPA members will participate in a session that’s centered on the growth of AV over IP and how the alliance as a whole and particular members can better address those needs for their clients.

“Like most things, this started with a different intent than what it has today and became something much different than what it was originally supposed to be,” says Phillips, who is now executive vice president of Whitlock.

“I was looking for a transatlantic pro AV industry partner to meet the needs of Impact and its clients at the time so I talked to Randy Klein at Crestron and he mentioned Whitlock and another firm.”

The 28 annual dues-paying members of the Global Presence Alliance cover about 50 countries and 200 cities around the world. And, if you think it’s easy to become a member: be prepared for about three months of applications, interviews and other scrutiny before getting the stamp of approval. 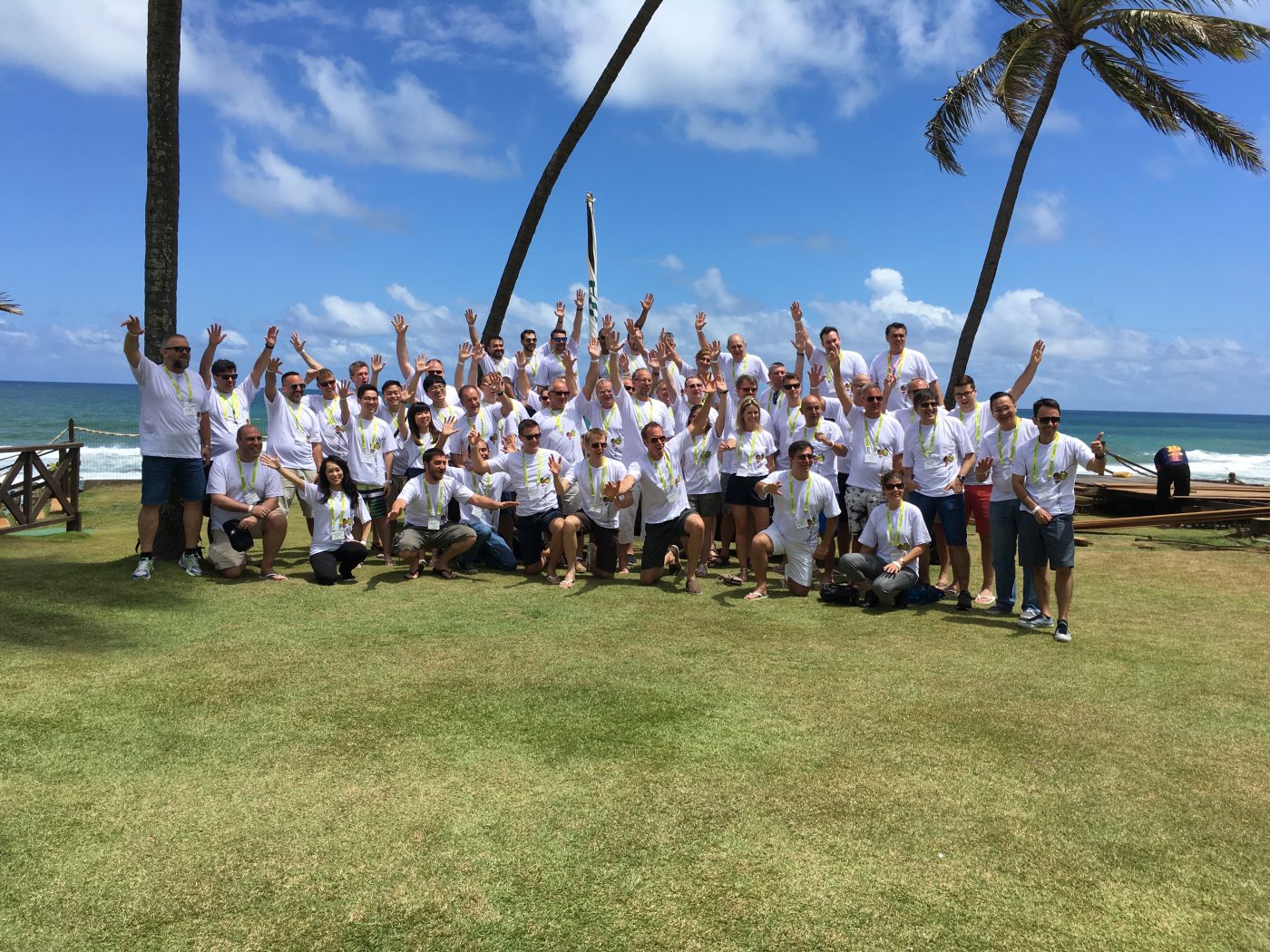 Growth of the Global Presence Alliance

The then-unnamed Global Presence Alliance added a Singapore partner shortly after the London-New York pairing, says Phillips, a move followed by about a year of coming up with the name, the structure for the organization and more.

Since then, the GPA has gone through three iterations, says executive director Byron Tarry. The original model in 2008 focused largely on group meetings at large pro AV industry events and referring business to fellow members. That simplified model got a boost in 2013, he says, thanks to increased interest.

“We realized this was a complex effort and the degree of infrastructure our customers wanted to see ramped up,” says Tarry, who paired with Phillips to create a charter. The GPA elected board members and created volunteer models.

In late 2016 and early 2017, the GPA launched what Tarry calls “the next generation,” which included him joining the alliance as its executive director. That evolution included registering the GPA as a formal entity in the Netherlands, adding staff and increasing its operational capabilities.

The alliance also started GPA University, a global learning management offering that includes tutorials on marketing and many other aspects of business.

Phillips expects there will be more changes to the GPA’s structure as it continues to grow and the pro AV industry changes too. The GPA will soon be expanding its accredited partner program which has focused mostly on AV manufacturers in the offering’s first four years, to include distributors and “relevant industry third parties,” such as analysts.

“If we are to remain relevant, we have to evolve our model to compete in the increasingly more IT-centric space,” he says.

“We need to have an understanding about global scaling,” says Tarry. “Collaboration, for example, is very different in other parts of the world than in the U.S. We have to understand the cultural elements or our global deployments will fail in two-thirds of the world.

“We need to reinvent ourselves. Global partners want less complexity in their delivery models. If we leverage our scale and aggregated data, we can drive some significant opportunities,” he says. 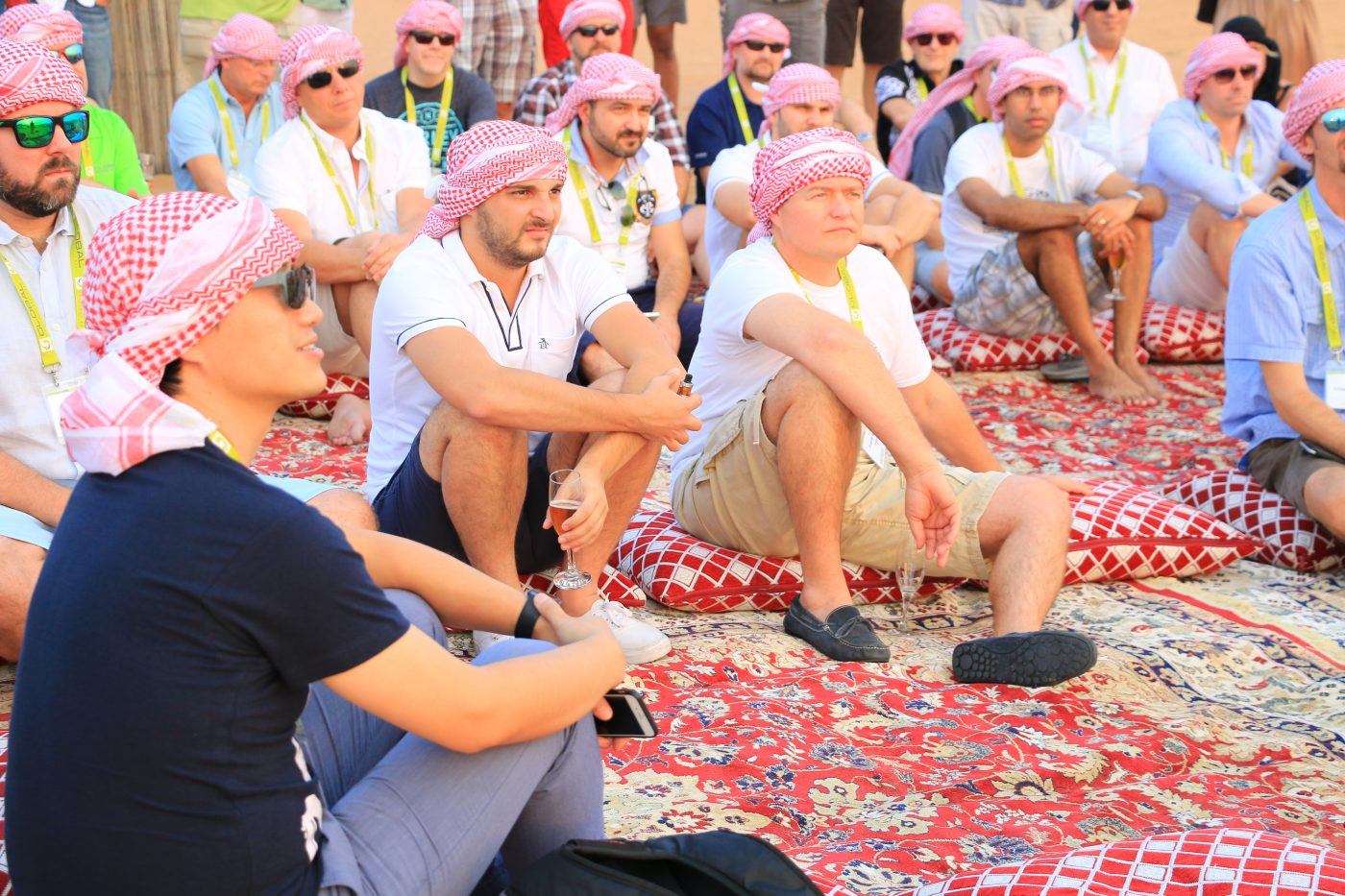 One For All, All for One

Phillips sees the Global Presence Alliance as an organization that’s modeled in many ways after the One World and Star Alliance concept used by airlines, where the individual brands can deliver “a consistent experience” as a single unit for the benefit of the group.

“It’s very easy to look at the GPA as just about lead referral,” says Phillips, “but the real benefit is the opportunity for shared learning as part of a global partnership. That learning isn’t just one way either. We at Whitlock have learned huge amounts too. The most exciting thing for me is the sense of community.”

Whitlock has enhanced its collaboration and AV-as-a-Service offerings, thanks to techniques he’s learned from GPA members in the Netherlands and New Zealand.

Hans Ulmer of Absolut Technologies in Brazil worked with Whitlock, then with another GPA member on projects around South America in Columbia, Nicaragua and elsewhere. The company became a GPA member in 2010 and Ulmer is especially happy with the “combined intelligence” the alliance brings to his company.

“There’s a real professionalization of what we’re doing,” he says. “That’s something we couldn’t have achieved if we were on our own. Each time we do something with the GPA, we always learn. We can see how others work and we get the best out of the whole world. It’s an infinite learning environment.”

Related: What’s the Key to Growth in the AV Industry? Expanding Your Portfolio

Peter Fell of Feltech U.K. joined the GPA in December 2014 after a three-month vetting process that saw them replace the existing U.K. member. Feltech also represents Ireland and will soon add an office there, says Fell, giving the company a presence in Europe even after Brexit takes effect.

“It made sense from a business point of view for us to go through the process of becoming a member, but the bigger appeal was the knowledge sharing,” he says.

“There’s nothing like that anywhere else in the pro AV industry that I know about. We’d be considerably behind the curve if left to our own devices. There’s no doubt 28 heads are better than one.

“I no longer have to ship an airplane full of my guys to do a job in foreign countries. That opens up considerably more business prospects for us in so many countries. We would have been reluctant in the past, but now we’re actively seeking them out,” says Fell.

Fell recently became a GPA board member, so he’s part of monthly board meetings. He also participates in weekly conference calls and says he averages two or three conversations with GPA members every week, whether about particular projects or strategy issues.

Among the clients Feltech has been able to help more completely through the GPA is a large bank and a growing software company. Overall, Feltech has seen an “exponential” bottom-line boost from the GPA, including about 20 percent of its revenue last year, says Fell. 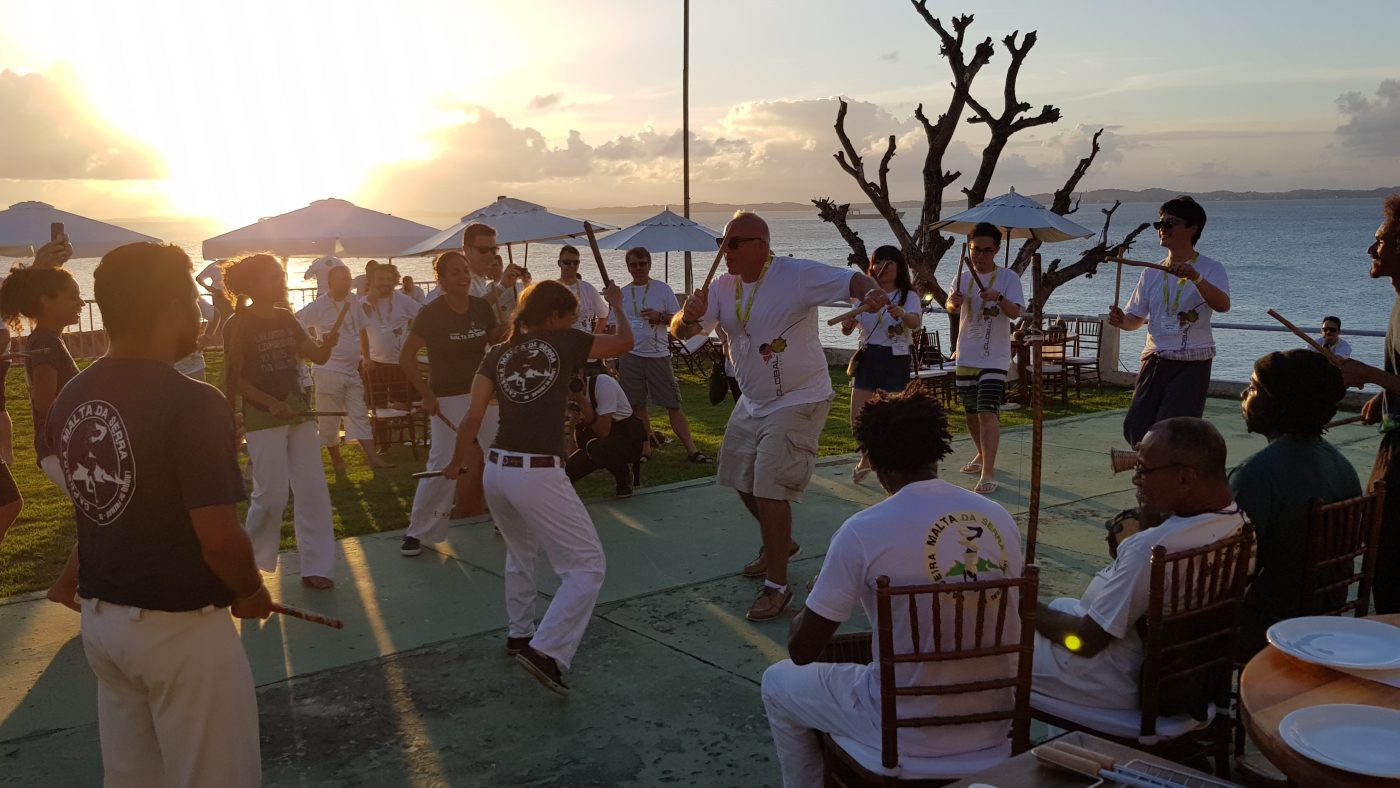 Tarry believes the GPA and its members are truly “making a difference” in the pro AV industry around the world.

“You’re driving an agenda that’s centered on an industry you feel passionately about,” he says. “We’re having a tangible, significant impact on this market and really increasing the velocity of its maturity and growth.”

Phillips calls the GPA’s model “locally responsible and globally sustainable,” adding it’s “all about pushing the majority of the profit to the host country.” That means members don’t worry about doing work outside their territories because they know they’ll have plenty of opportunities sent to them through other GPA members.

“It’s weird giving away intellectual property without recompense, but it’s about the quality of the experience,” he says. “We see it as an opportunity to grow our relationship with global customers.”

“Everything we do is built around that trust,” says Tarry. “It’s a relationship transaction, not a business transaction. Many of those relationships are driven by the smaller members. It’s not all about the larger members generating all of the business. Everyone plays a role and contributes a lot to the group.”

Ulmer says the GPA has opened doors for Absolut Technologies.

“We were taken seriously by multibillion-dollar corporations because of the GPA,” he says. “There are some huge new pro AV industry business opportunities today that we didn’t have before.”

Feltech has used the GPA standards on every project it works on, whether it comes through the GPA or not, says Fell.

“It’s about the mindset more than skills,” he says. “The expectations of our customers are changing and we’re trying to match our business model to that environment. It’s great that we can brainstorm this as a group rather than having to do it on our own.”

Tarry doesn’t expect the Global Presence Alliance to grow significantly in terms of its membership in the future.

“We’re not trying to stick a member in every corner of the world,” he says.

“We don’t need to just cover the map. We’re in the places we want to be right now and the places where we aren’t, it’s largely because the maturity of some markets isn’t worth us having a member from both sides of it. We’re driven more on fit and cultural alignment.” 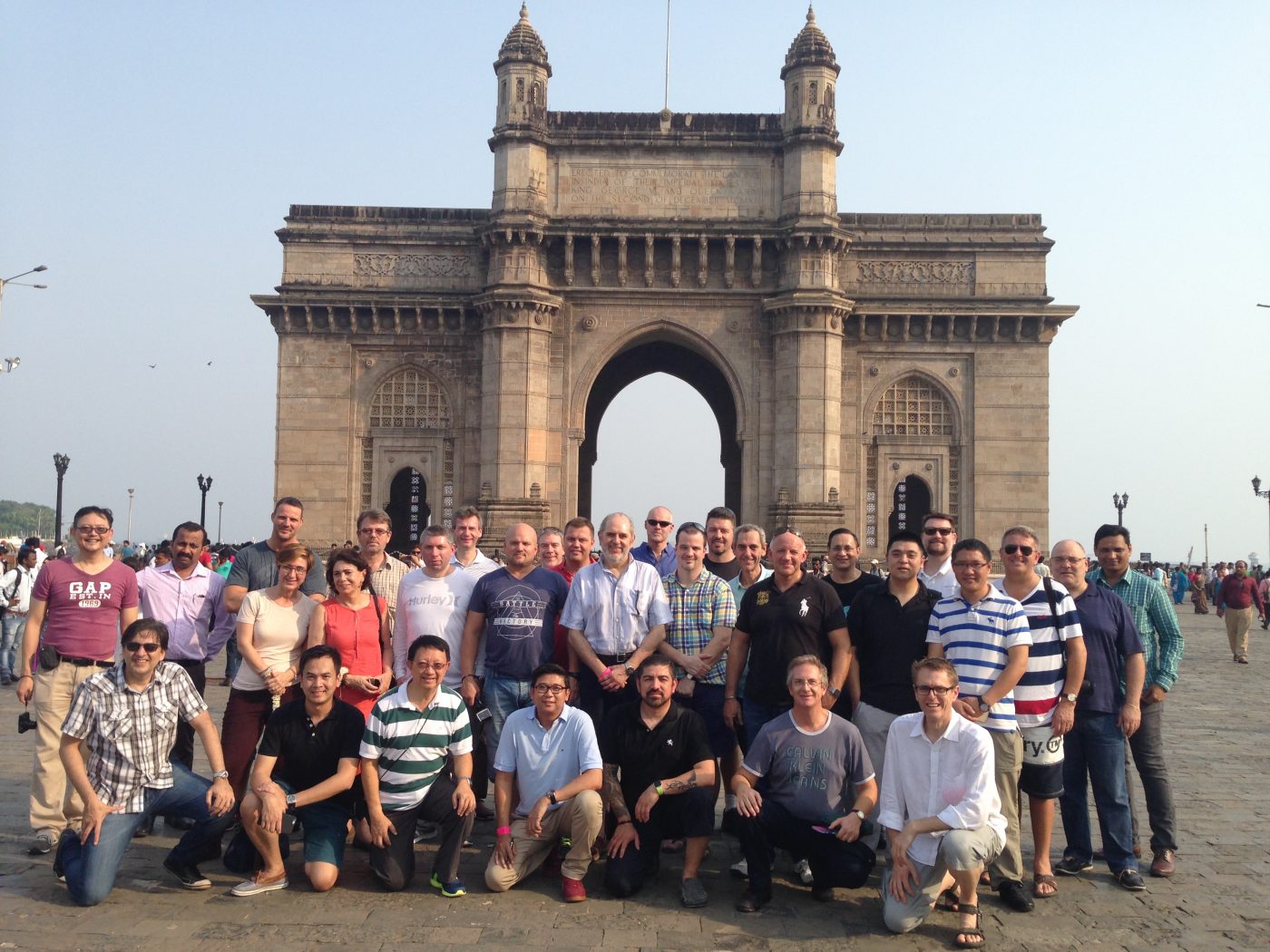