If you think you were surprised by the AVI-SPL/Whitlock $1.3 billion merger announcement that will have the AV industry buzzing for a while, imagine how the companies’ CEOs felt when they first heard about it “very recently” from their respective private equity owners.

Through that process, says Whitlock CEO Doug Hall, Marlin did a lot of due diligence “to familiarize themselves with our industry. They were very excited about our industry and the potential for what we had going on. We had a plan, a strategy we were moving forward with.” 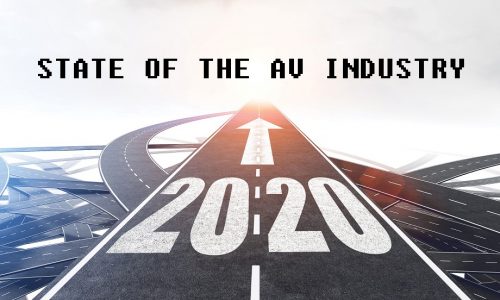 Soon after closing the transaction with Whitlock, Marlin was “made aware of an opportunity to invest in AVI-SPL,” says Hall. For them, it was “a very unique opportunity to take two great companies and put them together.

“Because of the way those kind of transactions happen, (Hall and AVI-SPL CEO John Zettel) didn’t really have a lot of knowledge of what was going on until very recently,” he says.

“From my side, there was surprise,” says Hall. “Any transaction like this that happens, there’s a level of uncertainty. It’s not imminent that it’s going to happen until right when the purchase agreement is signed. We hadn’t been informed by our investor, so we were doing business as usual. 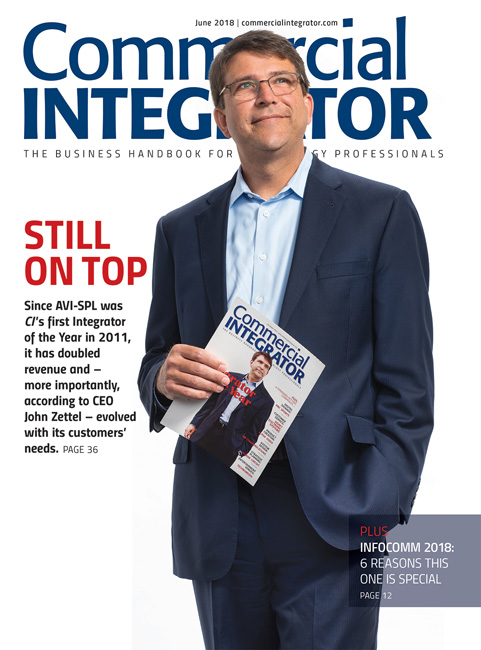 Look familiar? AVI-SPL CEO John Zettel struck the same pose for our December 2011 Integrator of the Year cover. In June 2018, however, we talked to him about how AVI-SPL had managed to stay on top of the AV integration industry for so long.

“I totally understand how it made sense to them. One real challenge here is we still have a little bit of work to do to get everything done. We could’ve used a bit more silent time to get through that properly,” he says.

Zettel says AVI-SPL was “going through our normal type of routine” and knew there was some interest from many companies in investing in AVI-SPL.

“It was highly opportunistic that it came together,” he says. “The timing did put some pressure on Marlin Equity to make a decision.”

“We were going through a normal process,” says Zettel. “We had several people interested in the company, then Marlin surged at the end. I had great respect for Whitlock.

We’ve always considered Whitlock to be the closest brother to AVI-SPL.

Behind the Scenes of a Blockbuster Merger

The pace of the deal and the push to close the merger by the end of March has been frenetic, says Hall.

“I’ve known John for a long time and I have a lot of faith in him as a person,” he says. “He’s got great integrity and a great reputation with his business, so ultimately I believe everything is going to be fine. We’re moving pretty fast right now.”

Zettel’s first reaction to the idea of AVI-SPL joining forces with Whitlock to form a $1.3 billion company was “very, very compelling and excited—but there’s a lot of work to be done.”

Hall is excited to join the AVI-SPL team although disappointed the Whitlock brand will go away when the deal is finalized, even though Marlin is the primary owner.

“The Whitlock brand is near and dear to our team, but we also have respect for AVI-SPL,” he says. “It’s less about the brand and more about go-forward plan and the team and what’s best for our team and our customers.”

Hall has learned in the last week or two that the companies are more similar than he realized.

“Sometimes when you compete, you assume things about your competitors,” he says. “Getting a lot more intimate in the last week or two, we’ve found a lot more similarities than we realized we had. I don’t know that the business culture is going to change as a result of this merger.”

Zettel expects the new AVI-SPL will combine best practices from each company into one approach going forward.

“Even when we compared core values, they were very similar in nature, with a focus on employees and customers,” he says. “It’s a simple formula that requires doing the right things at the right time.”

Both management teams are working through the new leadership structure of the combined company and talking about how to handle geographical overlaps and staffing capabilities with its 3,400 employees.

“This is early stages,” says Hall. “We’re working together and collaborating. We’re taking two large businesses that have a lot of people, so it’s a little more complex than a smaller acquisition.”

“If we have an overlapping geographic region, it’s because we have two successful offices, so those two offices can become one really successful office,” says Zettel. “We’re going to evaluate everything. Customer needs come first and both companies are staff based on that.

Company leaders have talked at a high level about the integration plan, work streams and best practices, says Zettel.

“We’re cooperating and acting like partners in terms of how to work through this transition phase,” says Hall.

AVI-SPL never set reaching the $1B revenue milestone as a goal, but thought of it “only as an internal weigh point,” says Zettel. Now that the proposed deal gets the company to that point, he isn’t celebrating the achievement.

“The next day, it’s business as usual,” says Zettel. “It doesn’t change anything. We didn’t go through some sort of magic gate that makes life easy. We still have to work and do what we did the day before to guarantee our success.”

“It’s not about the number,” he says. “It’s about being able to better serve our business and to build a healthier business. That’s been the priority. 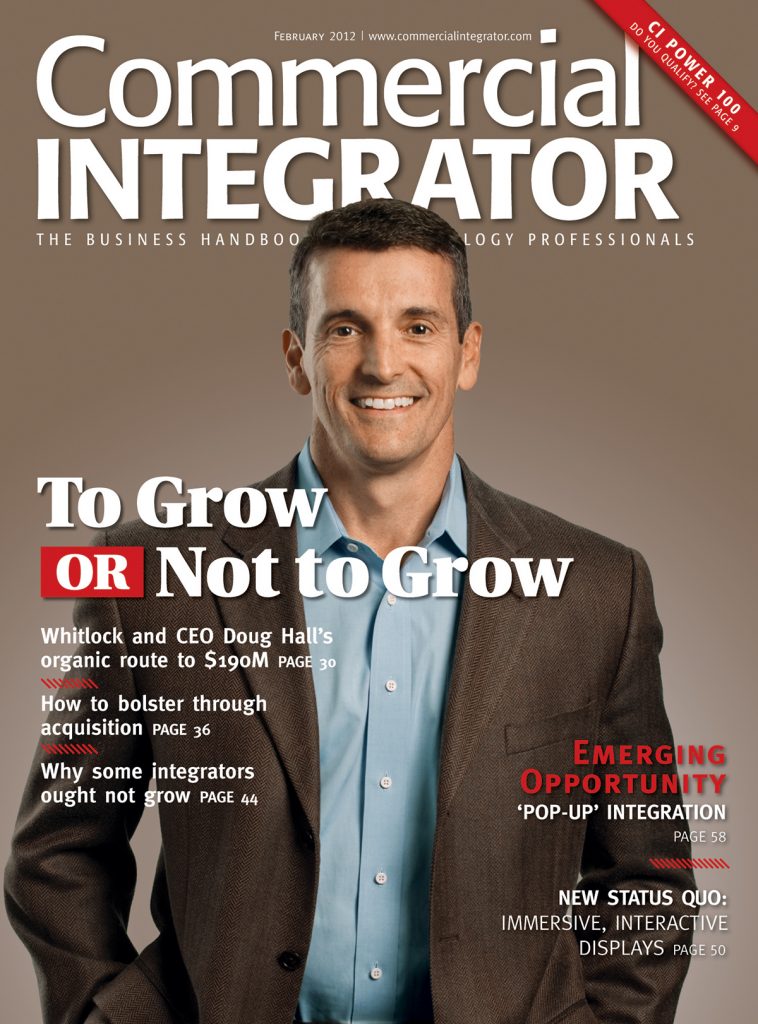 The answer to this question, for Whitlock, turned out to be: Yeah, we’ll grow. Photo: Scott Braman

“What we both achieved prior to this merger is we both had built global businesses that were able to serve global customers. That’s something 20 years ago, I don’t know if either one of us would have imagined we could do,” says Hall.

“When you take two companies that are able to do that and combine them, just think of the resources and what that means to the customers and to the team,” he says.

Why AVI-SPL and Whitlock Merged

Why did two hugely successful AV integrators want to join forces after years of individual success?

“We looked at Whitlock’s platform as a healthy competitor and there were parts of that platform that we really liked and we said there’s great value in and they may have done the same when they looked at ours,” says Zettel.

“As we begin to bring these companies together, we will see those best practices come together and it’ll fill in whatever holes we may have had or we had, to give more comprehensive offering to customers we have and a more compelling argument for future customers,” he says.

Both Zettel and Hall say their combined forces isn’t about wiping out the competition.

“It isn’t about what AVI-SPL or Whitlock or any other company has done individually,” says Zettel.

“There’s a lot of opportunity in this industry as a whole, a lot of companies that are doing really well. We have customers who understand the value of what we create in the enterprise.”

“It’s more of a reflection of customer needs and the market that’s out there,” says Hall.

“It’s cool to be part of an industry that’s evolved from products and systems to integrated solutions. There’s opportunity to succeed at all kinds of levels, depending on what your skill is, what your relationship is with your customers and what your unique value as a business is.

“We’d like to think we have all of those built into this organization, so we have the unique qualities: a small-town feel with the resources of a very large company,” he says.

From Competitors to Partners

Neither Zettel nor Hall had ever given much thought to someday joining forces, but they’re excited about it.

“We didn’t set a five-year plan that we were going to join forces,” says Zettel.

“We were two drag racers going down the path. If you’re going that fast and driving the mutual successes we have, you don’t have a lot of time to look sideways. You’re really focused forward and trying to figure out how to stay at the same pace,” he says.