Teamwork is an important part of any company, but it’s near the top of the list of the most hated office jargon according to a recent poll of 1,000 employees across the U.S., but nothing brings people more than synergy, at least when it comes to buzzwords they hate most.

Here’s more about the recent hated office jargon poll from an MSN report:

Even while working remotely, many office workers are still exposed to buzzwords when they “touch base” with the boss over email, Teams, Slack and Zoom.

Some phrases tend to get under people’s skin more than others and a 2019 GetResponse survey polled 1,000 U.S. employees to determine the absolute worst of the worst.

Touch base followed with about 2.1 percent of the respondents saying it’s their least favorite saying they hear in and around the office.

I wasn’t asked to participate in this poll, but I can tell you without question my most hated office jargon is “ideate.” Apparently, it’s a word but why can’t those who use it just say “think?” I also don’t love when someone says they’ll ping me—and I didn’t exactly know what it meant until very recently.

Related: Can You Guess What AV Keywords Customers Search to Find Their Next AV Experience?

In general, I try to avoid office jargon at all costs, but it’s an easy crutch for business leaders to lean on when they’re trying to deliver an important message to their employees. What they might not realize is if they rely too much on office jargon, employees are more likely to tune them out than back them up.

How many of these examples of most hated office jargon do you use regularly with your employees or do you have others you rely on most? Can we all make a deal to think twice the next time we’re about to spew one of these phrases next time and maybe find a simpler, clearer way to express ourselves? 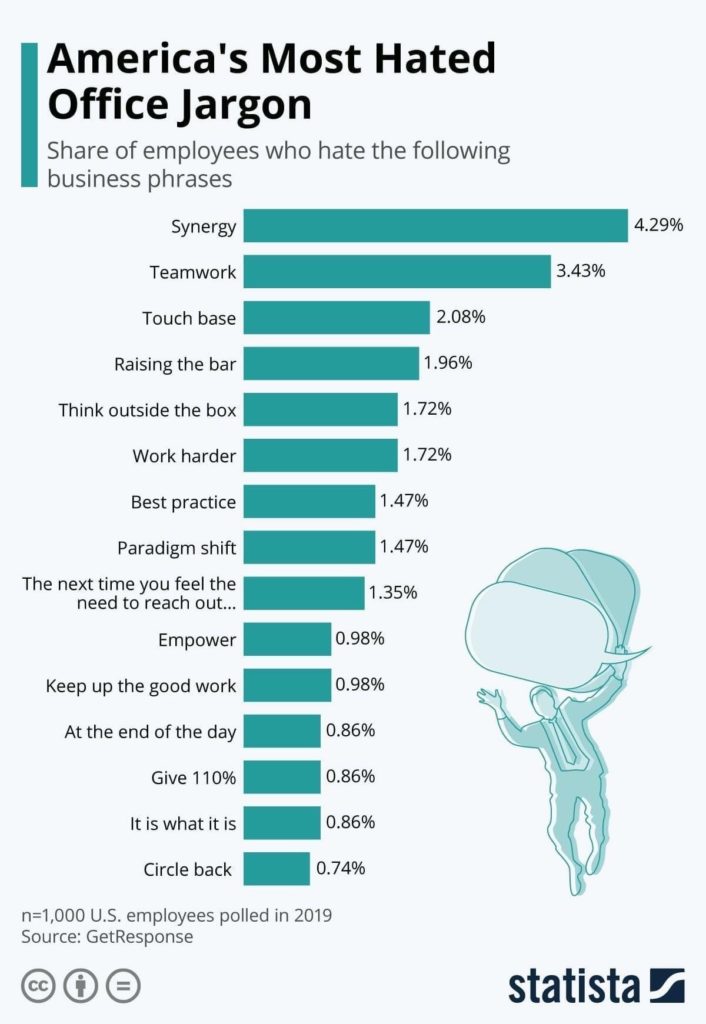