AVIXA CEO David Labuskes wasn’t sure what to expect when he gave the go-ahead to the association’s show staff to turn pro AV’s largest North American show into a virtual three-day experience, but he’s “overwhelmed by the experience” that was InfoComm 2020 Connected.

“None of us went into it with any clear expectations,” says Labuskes. “I went into it with a few goals: proof of concept, to model agility and innovation as industry association for AV industry and to hold space in people’s hearts for InfoComm. We achieved all of those, but that last one is most meaningful.

“It was such a bittersweet experience that truly filled a need I didn’t know I had in a way I didn’t anticipate it could,” he says.

Labuskes says he heard from many people across the industry about how much they enjoyed InfoComm 2020 Connected and “even in chat during the sessions, there was a lot of reinforcement about how awesome it was that everybody could still get together—and it was.”

That’s not to say AVIXA is going all-virtual from now on, though.

“Like everybody else, I wish I had been in Vegas for InfoComm, but I’m really glad we did it,” says Labuskes. “My team did something that was unprecedented when they had to pivot from physical environment to a virtual environment.

“They came together and invented solutions and delivered the impossible. The team that put together the content for this show didn’t just repurpose the content we had planned. There was a lot of thought that was put into it,” he says.

“As we look forward to more virtual engagement, those are the kinds of areas that have the most promise. There’s the opportunity to use that interaction with the audience to allow the program and the content to evolve over the course of time as well. We want to explore that as we get better at this,” says Labuskes.

Because the sessions were largely built since mid-March, InfoComm 2020 Connected content “absolutely was much more topical and timely” than what’s been available at previous InfoComm shows, says Labuskes.

“It would be good for us to look at that in both the physical and virtual environment,” he says. “At a physical show, we try to eliminate as many variables as possible, but I think this platform and environment gives us opportunity and flexibility.”

Taking It All In

As you might expect if you’ve seen Labuskes be seemingly everywhere at in-person InfoComm shows, he attended just about every virtual InfoComm 2020 Connected session and even had time for trivia and happy hour on top of it.

“My feet weren’t sore this year, but my hands were by the end of the week,” he says. “You use the environment you have.” Labuskes got involved in some of the InfoComm discussion on Twitter and participated in the session chats as well, one of the highlights of the virtual event for him.

“I found myself ‘running’ to get to a session as it was occurring so I could participate in the chat,” says Labuskes. “As I was observing a session, I was also reading the chat. That made it more real for me.

“I absorbed more content than I’ve ever been able to. I don’t know that I’ve ever sat still for a half-hour at an InfoComm show,” he says.

InfoComm 2020 Connected attracted about 20,000 registrants for last week’s live broadcasts, although the content will be available through Aug. 21, so those numbers could certainly go up significantly. About 40 percent of the initial batch of registrants were from outside North America.

Related: One Product to See from Every Virtual Booth at InfoComm Connected 2020

Labuskes wonders if that international exposure to InfoComm’s North American show will change the staffing needs for exhibitors when the show goes back to an in-person event, presumably next June in Orlando, Fla.

AVIXA senior VP of exhibitions and events Rochelle Richardson joked with the InfoComm 2020 Connected team at the post-show virtual happy hour that the staff is now “officially experts on delivering virtual trade shows,” says Labuskes, and by definition that’s true.

“There are probably a lot of rooms where we’re experts by the dictionary definition, but I certainly wouldn’t say we’ve even begun to tap into the potential of this type of experience,” he says.

Labuskes noticed a few speakers talking while muted and a few other technical glitches during InfoComm 2020 Connected, but nothing that derailed the experience significantly.

“We’ve got a high-maintenance audience,” he says with a laugh. “There’s more feedback about audio, video and lighting quality than any other gathering would have. I almost always saw someone say, ‘we’re here for free’ or ‘they put this together in 2 ½ months’ in the chat and that diffused it.”

“I was quite astounded by how it went,” says Labuskes. “There may have been some rough edges, but nothing failed. All of it delivered.” 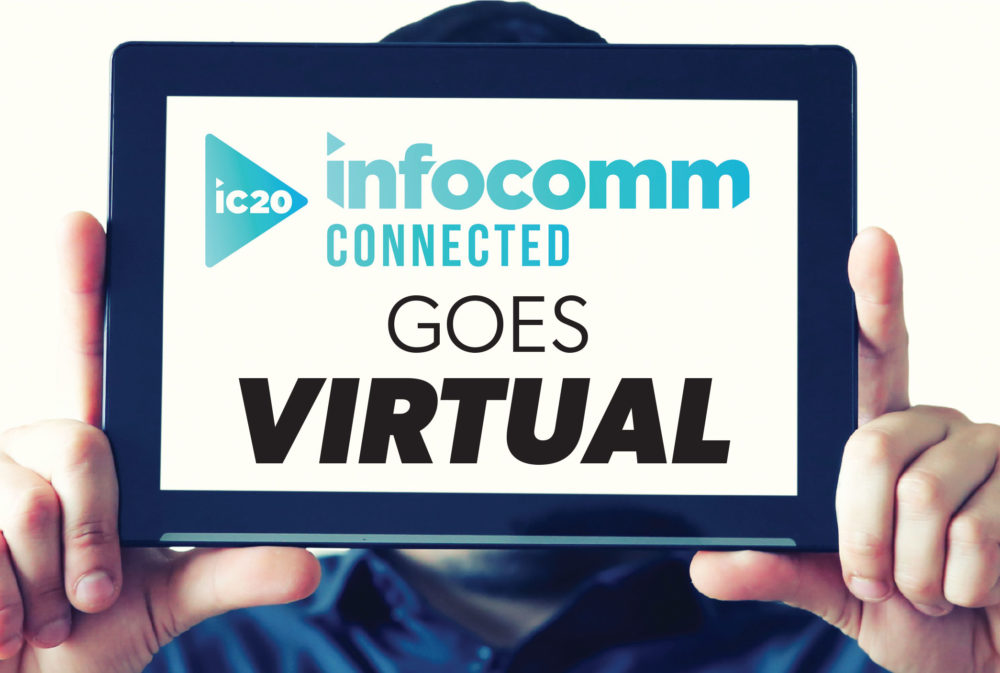 You can expect AVIXA to keep rolling out virtual events in the future but that doesn’t mean there will be both a virtual and in-person InfoComm show.

I don’t think you do a virtual InfoComm and a live InfoComm and deliver two events simultaneously,” says Labuskes. “You could conceivably look at doing virtual events at different times of the year.

“I liked the dynamic creation of engagement that was wrapped around the content, but I don’t know that that has to happen on the Wednesday of the show. How do you engage someone who’s not there? There’s a cost to that and a tolerance and grace for video and audio quality that didn’t exist six months ago,” he says.

“If we had taken the video quality of some of these sessions and tried to live-steam them in 2019, we would have received a significant amount of ‘constructive feedback,’” says Labuskes. “To do it at scale at broadcast quality is exceedingly expensive, but if you can do it at Zoom or Teams quality, you’ll start to scale up.”

Virtual shows allow for some freedom show organizers just don’t have with in-person events, he says.

“We as an organization are really good at delivering trade shows. It’s part of our core strength, but how do you take what you do physically and make it work online? If you approach it from other direction, what do you do with online platform to deliver most value you can to make connections?

“People want to connect to get a job, hire someone, to buy or sell a product,” says Labuskes. How do you leverage the trade show experience to strengthen the product you’re delivering on the Internet?

“If you approach someone who’s never been to a trade show and you start by cutting a ribbon, they’d wonder why,” he says.

“For all those who have attended, you’d be reinforcing the positivity of that experience. On one hand, it’s an anchor that’s holds you back from creating something new. On the other hand, it’s a tradition that brings nostalgia and emotion and causes greater engagement.

“If you get that interplay just right, you probably have really strong viable products both in the physical world and the virtual world,” says Labuskes.

Labuskes says he’s not disappointed that InfoComm 2020 Connected had fewer new product launches than its in-person predecessors or that manufacturers are hosting their own virtual events to announce their new products.

“This is proof of concept,” he says. “If I was a manufacturer or a solution creator and I’d spent a lot of time and money on research and development, I’d probably want to use a known platform. I don’t know that I would put all my chips on this bet. It’s more known now.

“We are certainly not competing with the manufacturers. InfoComm isn’t about us. It’s about our exhibitors. It’s their party, not ours. We will create an experience that’s valuable to the marketplace. Don’t know that it has to be an either/or anymore,” says Labuskes.