InfoComm 2020 Connected has been the largest example so far in the AV industry of how a trade show can transform to a virtual format—and organizers of Integrated Systems Europe 2021 were paying close attention to everything AVIXA did with its hastily created show that replaced a planned in-person event.

While ISE staffers have much more time to plan the digital component of their 2021 event in Barcelona than AVIXA did when it replaced InfoComm 2020 with a digital version for this year, that doesn’t mean the evolution will be easy, says Integrated Systems Events managing director Mike Blackman.

InfoComm 2020 Connected was “a bit of a guinea pig” for ISE staff, he says, noting his team will use some of the components AVIXA did in building its show when they add a digital element to ISE 2021 in February. Still, Blackman and his ISE staff still plan for an in-person Spain debut in six months or so.

The expanded digital reach for ISE 2021 will include “a wide selection of cross-platform live ISE content being made available, along with many other engaging digital opportunities.”

“We’re being very realistic,” says Blackman. “We don’t expect life will be 100 percent normal by February. We’ve experienced a lot of new things in how we live and how we work because of the pandemic and we expect a lot of that will still be in place.

“That may mean there are people who may not be able to or may not want to travel at that time but who still want to have access to the information. Digital will never replace in-person events. Almost 35 years ago, people were telling me digital would take over for in-person events and it still hasn’t happened. People want to meet and have those in-person experiences,” he says.

Madrid, Barcelona and Munich are among the large European cities that are expected to start hosting in-person events again in September, says Blackman. Those shows will serve as additional examples of what ISE planners should—and shouldn’t—do as they prepare for their 2021 hybrid offerings.

The Fira de Barcelona, Gran Vía, plans to reopen in September, following the collaboration with

“We’re going to see how they cope with that and how they’re managing the various rules and regulations,” says Blackman, noting ISE staffers are experimenting with various digital platforms and options for ISE 2021.

He expects more hygiene, additional cleaning of products on the trade show floor and social distancing protocols to be in place in the widened aisles of the Fira Gran Via during the four-day event that marks the largest pro AV event in the world.

Risk mitigation consultancy AON and the Hospital Clinic of Barcelona will determine the specific security criteria for holding B2B events at the venue later this year.

Blackman wonders if the innovators who exhibit at ISE 2021 will debut more gesture-based products than ever as people become less interested in public touchscreens. He expects show staff to spend a lot of time cleaning surfaces that people have to touch for registration, information, etc., at the ISE show. 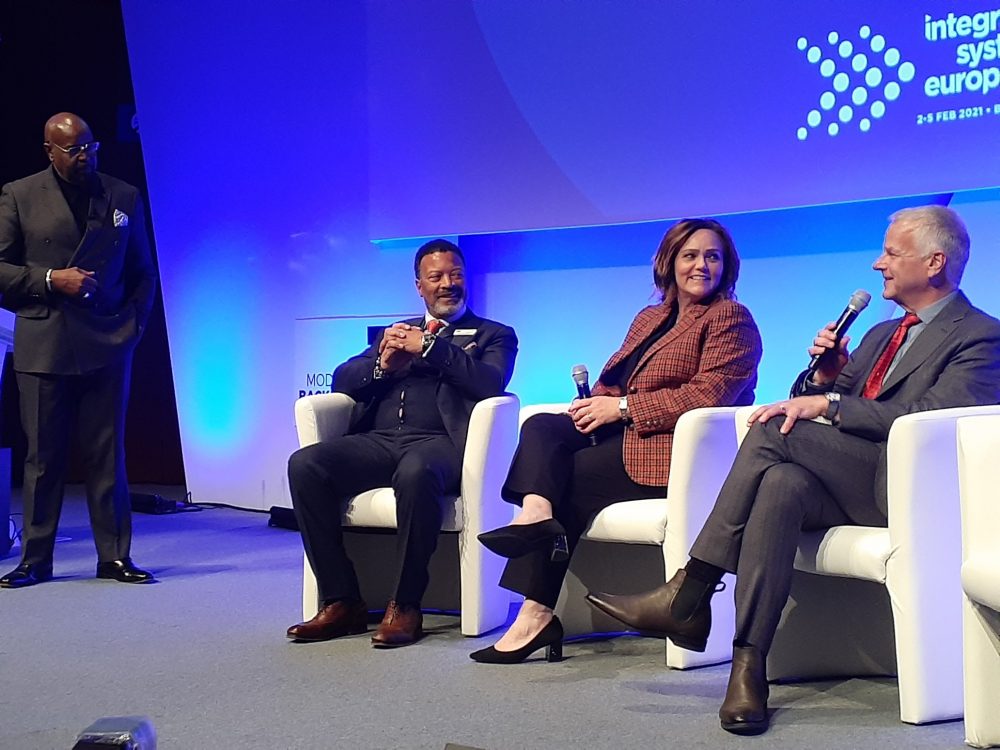 Blackman says ISE staffers are already working with Fira Gran Via officials to incorporate an ultraviolet cleansing system into the facility’s air circulation system and expects the air conditioner to be cranked up to allow for faster air circulation during ISE 2021.

Each exhibitor could have ultraviolet air cleansing system in their ISE 2021 stands, he says.

ISE staff implemented a no-handshake rule for the 2020 show and Blackman says he’s heard anecdotally that fewer attendees came home sick from Amsterdam in February than in recent years. That means it’ll be all about fist bumps or elbow bumps at ISE 2021 and beyond, he says.

“We’re going to continue that, COVID or not,” says Blackman, noting it’s been an adjustment for him. “I feel I’m quite rude to offer not to shake hands. It’s very odd to avoid doing that.”

ISE attendance dropped from about 82,000 in 2019 to about 55,000 in 2020, due to a combination of fear of some attendees traveling as coronavirus concerns were building and a large snowstorm that closed several major European airports that week.

Blackman now wishes ISE had a digital component for ISE 2020, although he’s been having conversations about digital and virtual events since he got into the events business in 1983.

“It’s something we’ve learned in hindsight,” he says. “Offering a digital part would have been good to help people continue with some of their meetings. We were offered this before and looked into it, but felt it wasn’t necessary. It’s a must now for all exhibition organizers.”

ISE planners will decide in September how to develop a good mix of content and offerings for both in-person and virtual ISE 2021 attendees, says Blackman.

“We don’t want to get the fatigue of videoconferences and webinars,” he says. “We want to have more interaction. We want people to come to Barcelona. Whatever we do will never replace that experience.

“We’re very confident about having a very successful in-person show. How can we make the digital component more than just people watching a video? We’ve been recording our content for ages, so now we just have to change from live broadcast to recorded,” says Blackman.

Blackman expects ISE will continue to offer some sort of virtual element beyond just 2021.

“I think we have to continue doing it,” he says. “Not everyone has the opportunity to travel so they miss out on the technical training and education. We can add that element to allow them to experience some of that.

“If we can give new audience good snippets of information, maybe we’ll win them over in future years. Our goal is to bring people together in one place. We try to bring buyers and sellers together in real time,” says Blackman.

“Event organizers have always been wary about having events where people don’t have to come,” he says. “Being able to do this shows our flexibility in finding other ways to bring people together. The difficulty is trying to be creative, trying to make the experience and interaction valuable.”

Even those who attend ISE 2021 in person aren’t likely to be able to see everything by themselves during the four-day spectacle, says Blackman.

“One of the challenges companies have at shows like InfoComm and ISE is they’re so large so it’s difficult to see everything,” he says. “We always give the advice to companies that are sending groups to split up.

“When we have to put social distancing in place, having more space allows us to be more creative about how we’re going to do that. It’s a case of how you manage the space you’re in. We want to create more comfortable, more hygienic situations and places for people to meet,” says Blackman.

“It’s a bit of an anathema for a show organizer,” he says. “Normally you want to see crowds, but now you need to spread them out a bit.”