Customer service approaches are becoming worse by the day—and it’s not just because so many companies are farming out theirs to foreign countries so people who speak English as a second language are trying to solve problems that are often more complex than what’s written on a script. 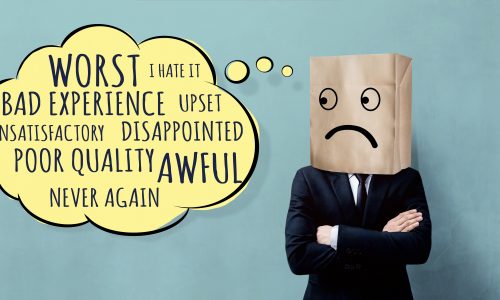 I’m in the midst of a dispute with a contractor that doesn’t feel like it’s going to end well—for me anyway.

This contractor did some repair work on my house about nine months ago and the work he did started to peel and crack about six months later, so he came back and said he would fix it with something stronger, only to have that repair last about two months.

When I approached him for a refund, he said he’s never done that before and he wanted to come back and fix it again. I’m not inclined to let him do that since he assured me the last time that the repair he’d be doing would address the problem I’d had less than six month into the five-year warrantee period.

So, he offered me a partial refund—initially less than 10 percent and eventually up to almost 13 percent—as a take-it-or-leave-it option for me. So far, I’ve left it although this contractor doesn’t seem inclined to make me a better offer, short of me bringing him to small claims court.

I’ve never done anything like that and the hassle and associated costs don’t seem worth it for the price of the job as a whole.

That means I’m in the position of taking far less than what I think I should from this contractor for his subpar work and repair, or letting him try again to fix his mess, even though he promised me that’s what he was doing the last time I had him come back to repair the work he had done six months earlier.

Yes, I’ve got a warranty that says the work is good for five years and it’s been about nine months, so you’d think my case would be a slam dunk, right? You never know how things will go through the court system and I’m not sure I want to spend the money to find out how much of a sure thing this is.

But the contractor’s offer to me isn’t nearly enough for me to find someone else to do the job right. You’d think pride would be an overriding factor here and that the contractor wouldn’t want me bad-mouthing him and his company to my friends and neighbors, but that doesn’t seem to matter to him.

You’d think he’d give me my money back just so he wouldn’t have to keep getting emails from me asking me when he’s going to give me my money back, but it seems he’d rather just let the scenario continue to linger in the hopes I’ll eventually drop it. Clearly, he doesn’t know me very well.

My hope is that most AV and IT integrators are better at dealing with problems and disputes with audio visual customers than this contractor seems to be, but I’d have to ask your customers to know for sure. I know most company officials I talk to for profiles say their customer service is a strength, but is it really?

The proof is probably in the percentage of repeat and referral business these integrators get. I wonder if they’d ever let us see that information so we could get an accurate picture of how they truly handle these issues.

I’d like to think that customer service woes are most prominent with small businesses who aren’t as well-trained in how to deal with problems like this but there’s enough evidence of big corporations turning their back on their most loyal customers at the worst times to tell me otherwise.

As we immerse ourselves fully into the holiday season this week, here’s hoping customer service is at its peak for 2019, but that’s probably just wishful thinking.

Automation and outsourcing of customer service  has taken some of the personal connection out of the equation in many cases, meaning the people whose job it is to solve customers’ problems are at least one step removed from the customer and the business.  Then again, that doesn’t explain my issue.

As we get closer to the edge of recession, can you really afford to have audio visual customer service policies and practices in place that scare people away?