Last summer, we were introduced to Modus VR, an AV design company which uses virtual reality to put customers in a virtual space representing their project and visualize what audio visual elements can be placed in different positions. Though they were focused mostly on the home integration market then, Modus is expanding to commercial, and they want to meet with commercial integrators at InfoComm 2019.

According to Modus, the company’s visit to InfoComm this year revolves around their hope to “learn about the specific needs of commercial AV resellers in advance of an expected formal market entry later this year.”

Listen: VR is Your Friend! Tune In to Episode 29 of Pro AV Podcast, AV+ 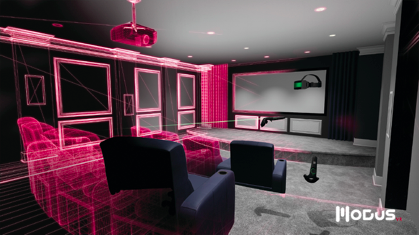 Ken Brueck, founder of Modus VR, says the company’s commercial focus will start on huddle spaces & conference rooms — a very different market, you would think, from the company’s original tech revolving around home theaters. But Brueck says it’s only a question of buyer motive.

“For conference rooms, the buyer is different: they’re not fantasizing about good times in the conference room; they’re worried about the ‘bad times’ with the boss if the installation doesn’t deliver on the original problems,” he says.

“On the integrator’s side, sometimes the result is that the client doesn’t allocate enough money. So you need to be able to establish that you’re going to do a good job, and help a client understand why the room is going to be better.”

“Providing a powerful VR experience earns trust with a ‘wow factor,’ but it also gives clients a chance to literally walk through the solution instead of just a stack of papers and an elevator pitch on each bullet point,” Brueck says.

“A powerful VR experience earns trust with a ‘wow factor,’ but it also gives clients a chance to literally walk through the solution instead of just a stack of papers and an elevator pitch on each bullet point” — Ken Brueck

“Giving a client an option between an 85-inch screen and a 76-inch screen doesn’t mean much to most of them, but seeing how both would fit on a wall is a different story.”

Brueck says he’s hoping to meet with as many commercial integrators as possible during the show, and encourages the curious to come by and test the equipment out for themselves.

“We’re listening to what brands commercial integrators sell, what specific problems they face in the huddle room and conference room markets,” he says.