URC may be firmly implanted in the residential integration market, but it’s gaining traction in the commercial market – and it punctuated that shift at InfoComm 2019 with demonstrations of robust URC Total Control commercial applications. 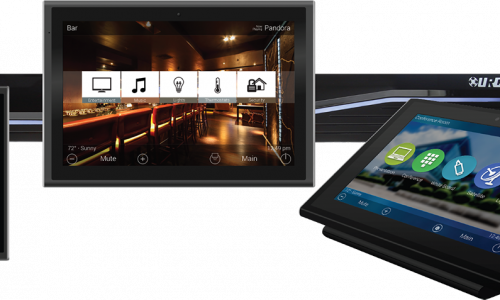 Related: InfoComm 2019: URC Taking ‘Total Control’ of Commercial Market
The MRX-30, which retails for $2,500, offers “lots of horse power to do great, big projects with tons and tons of two-way interfaces for our third-party vendors,” says Rambler who runs through the step-up features of the Total Control MRX line in a Commercial Integrator video.

In terms of the MRX-30, URC says it’s targeted at both residential and commercial projects, providing instant two-way communication with the family of Total Control Interfaces including tabletop touchscreen controllers, in-wall touchscreens, handheld remotes and keypads.

To emphasize URC’s command of the commercial project demands, Rambler walked through a demo of a URC Total Control-centric meeting space with an MRX controlling a Vaddio camera and more.

He then walked through a Total Control restaurant interface nimbly controlling music selection, lighting and more.

Even before InfoComm 2019, URC had its share of loyal commercial integrators. One example is Washington, D.C. area based Nard’s Entertainment which is already seeing URC Total Control have a significant impact on its commercial business, CTO John Carroll told CI.

The integration firms relies heavily on URC Total Control MRX-15 and MRX-30. “These processors are, by industry standards, not really at high price points, but they pack a lot of punch,” Carroll says. “We are running smart buildings that take up entire city blocks with these.”