Located on Sir Winston Churchill Square in downtown Edmonton, Alberta, Canada, the Stanley A. Milner Library is the flagship branch of the Edmonton Public Library (EPL) and sees more than 1.2 million visitors each year.

In December 2016, the library closed its doors for a major revitalization project which included a complete interior renovation to add new spaces and 21st-century library amenities.

When the project was being conceptualized, EPL solicited feedback from the Edmonton community through a series of consultation sessions to help inform the services and features to be offered with the revitalized library.

With a multistory atrium to be built as part of the new building design, EPL CEO Pilar Martinez envisioned a central focus point for customers entering the building—something that would wow them and set expectations for everything else within the library.

While in Brisbane, Australia in 2015 for a library convention, Martinez visited Queensland University of Technology (QUT) to see The Cube, one of the largest interactive displays in the world. This inspired the idea for a massive, two-story interactive digital experience in the revitalized Stanley A. Milner Library.

The following year, EPL director of technology services Steve Till-Rogers went to see The Cube and established a collaborative partnership with the QUT team.

“We became inspired by the educational and entertainment opportunities of a large-scale interactive experience,” he said.

In addition to The Cube, the EPL team conducted research on several more digital installations throughout the world and evaluated a range of different display technologies, all of which guided the vision and subsequent design of their project.

After identifying an LCD touch screen from Finland-based MultiTaction, they searched for the best technology that could seamlessly merge with that display.

The EPL team ultimately landed on the Planar TVF Series LED video wall as the best solution to overcome the high amount of ambient natural light in the atrium, said Till-Rogers. 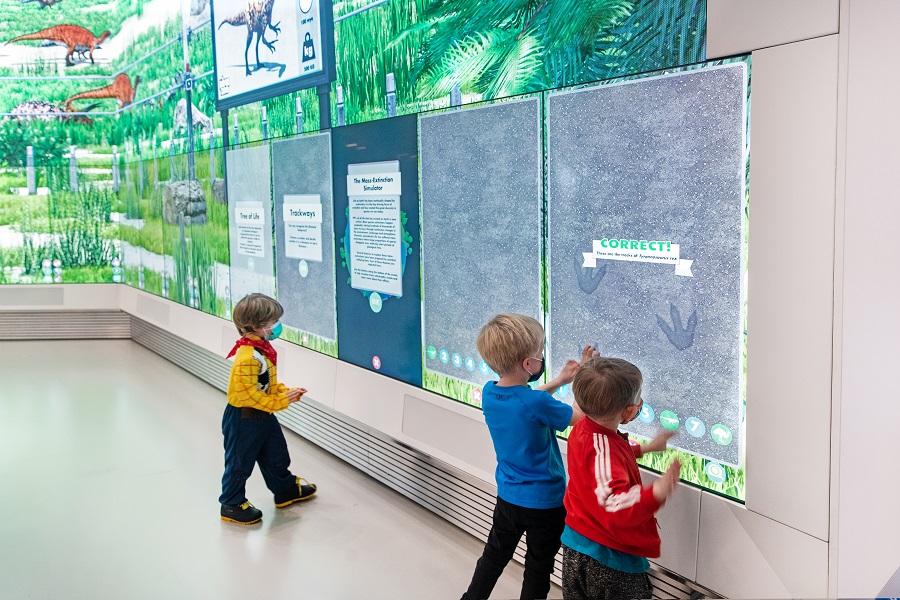 Inside the Milner Library Installation

“This is truly an amazing digital interactive experience and unique in North America for a nonprofit library,” said AVI-SPL account manager Adrian Bullock.

Essentially, two installations were built inside the Milner Library—a larger, front installation incorporating a V-shape design and a smaller installation located on the backside of the bigger one. 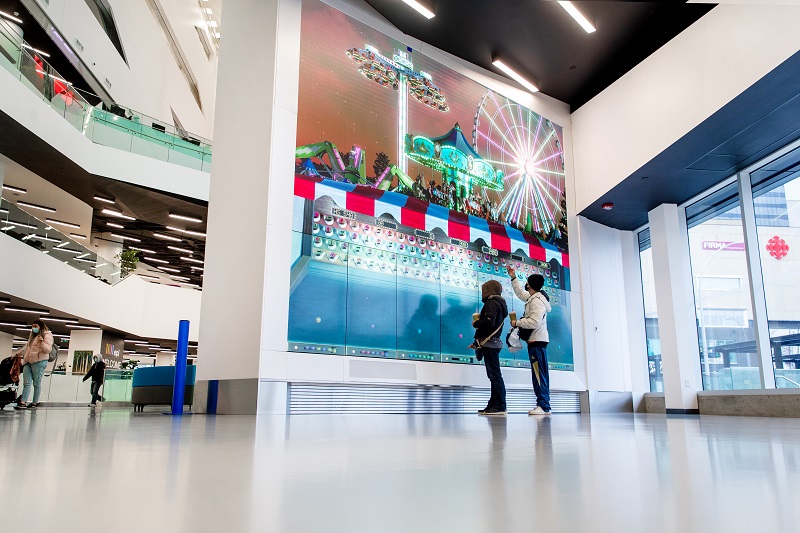 The reverse side includes a nearly 16-foot-long, 9-foot-high Planar TVF Series LED video wall in an 8×8 configuration and a 1.8mm pixel pitch (TVF1.8).

“The Wall is intended to capture people’s attention as they enter the branch and draw them in for a closer investigation,” Till-Rogers said.

“It creates a lifelike simulation that’s hard to describe in words. The colors are bright and saturated, which allow the scenes to really stand out.

“The display technology is framed to create a window into a 3D-rendered scene that appears so lifelike you could almost climb inside,” he said.

“When standing close to the display, you can sense the scenes in your peripheral vision,” said Till-Rogers. “It gives the experience more dimension.”

The main purpose of The Wall is to encourage visitors to explore STEAM (science, technology, engineering, arts and math) content by interacting with dynamic scenes.

Exhibits that are presented on The Wall include:

“The experiences are fully integrated with content moving in and out of the interactive areas,” Till-Rogers said. “Even though the touch parts are on the bottom row only, users can still engage with the overall scenes.

“When visitors become immersed with the content, the experience becomes not only entertainment but also provides knowledge. The interactive component brings another dimension to learning,” he said.

Looking to the future, EPL plans to forge partnerships in the Edmonton community and take a collaborative approach to designing more digital learning experiences.

“As a library, we’re focused on digital innovation, imagination and sparking curiosity,” Till-Rogers said. “The Wall gives us a platform for serving that purpose. We have content designers and developers and want to collaborate with scientific experts and specialists in different fields to create new exhibits.”

As an example, EPL is in the early stages of a space exhibit and has begun to associate with astrophysicists including the University of Alberta.

“We are going to make sure that our projects are informed and underpinned by real science,” Till-Rogers said.