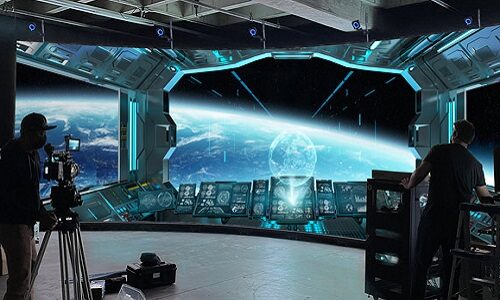 Display manufacturer Planar has announced the launch of Planar Studios, a new initiative that capitalizes on the growth of the virtual production and extended reality markets by combining the advanced technologies, industry partnerships and personnel to create on-screen content for film and TV.

Through the initiative, Planar hopes to become a partner of the film and TV industry by developing advanced visual technologies like critical LED and motion capture systems, bringing virtual production (VP) and extended reality (XR) to mainstream entertainment, as well as corporate and education markets.

LED technologies are becoming more and more common in TV and film, including in popular shows like “The Mandalorian” and “Westworld” where large LED displays essentially replace green screens, but Planar’s goal is to make the technology more accessible, streamlined and repeatable.

The Planar Studios initiative leverages the company’s on-camera broadcast studio installations and other products to bring the performance and installation flexibility required by these new production technologies.

Planar says it has worked directly with creative and technical professionals to tune and evolve its CarbonLight LED Displays, which is a staple in many broadcast studios, to include features required in contemporary and future VP and XR production techniques.

Planar Studios is supported by Planar’s dedicated VP and XR team, which is backed by the company’s team of pre-sales and post-sales product specialists located around the globe. Now, Planar says it can provide a one-stop shop to address customers’ production needs from design to deployment and post-sales.

According to Planar, the company is collaborating with digital production and visual storytelling experts, including its sister company Natural Point, the creator of the OptiTrack family of motion-capture software and high-speed tracking cameras

According to Planar, LED display technology and motion capture are only part of the VP and XR equation, so the company is working closely with hardware, software and service providers in the industry, including Epic Games Unreal Engine, disguise, Brompton Technology, Colorlight and more.

Adam Schmidt, Planar’s executive vice president, said in a statement that while early adoption of VP and XR have been exciting, the surface is barely being scratched.

“We recognize advanced technological development, productive industry partnerships and a dedicated team of experts to be key in helping customers overcome creative limitations,” Schmidt said.  Planar Studios is our response and will be a driving force in unlocking the future of VP and XR.”

Planar said it will continue to work with leading professionals in the VP and XR industries to innovate the company’s successful on-camera LED displays to more closely meet customer demand as the markets advance.

AJ Wedding, director and co-founder of Orbital Virtual Studios, said in a statement that LED display technology is dramatically transforming the production industry.

“LED display technology is taking the production industry by storm, enabling new techniques and processes that are transforming the way video producers create incredibly realistic action and transport audiences to new worlds,” Wedding said. “Having seen and experienced Planar’s state-of-the-art LED display technology firsthand, and worked closely with their team on many shoots, I have no doubt that the company delivers the superior visual performance, support and versatility today’s movie directors and producers need to create VP projects like we’ve never seen before.”