If you’re like most people in the U.S. and a significant swath of the developed world, you probably only think about your Internet access whenever you don’t have it—even if the outage lasts just a few seconds. In a world increasingly reliant on technology, it’s become a staple in everyday life.

Except that’s not true for everyone. Integrate Baltimore founder Ernie Beck and 50 or so organizations across his city are hoping to change that for the thousands who not only don’t have Internet access but also don’t have devices to access the Internet even if a network were nearby.

The Digital Equity Coalition is a consortium of non-profits, grant-making foundations and others who are focused on the disparity between those who have immediate and unfettered access to the Internet and devices that use it and those for whom the lack of access could cost them a successful life.

“When the pandemic struck, it blew the lid off the digital divide issue, specifically here in Baltimore, but really all across the country,” says Beck.

“Once the stay-at-home order became mandatory, you had students who were reliant on schools to provide them with these devices and with access to the Internet who are now being asked to stay home and do their school work through distance learning, in some cases with no device,” he says.

“This issue went from being a known problem to being a systemic issue,” says Beck, who started Integrate Baltimore as a side gig about eight years ago with the goal of eliminating electronics waste by giving devices that had been removed from installs in favor of upgrades to those who needed them.

The goal, he says, is to “increase awareness of AV industry and at the same time solve the e-waste challenge and create more equity through digital devices.” That’s why the mission of the Digital Equity Coalition and its device drive spoke to him so clearly and why he decided to get involved. 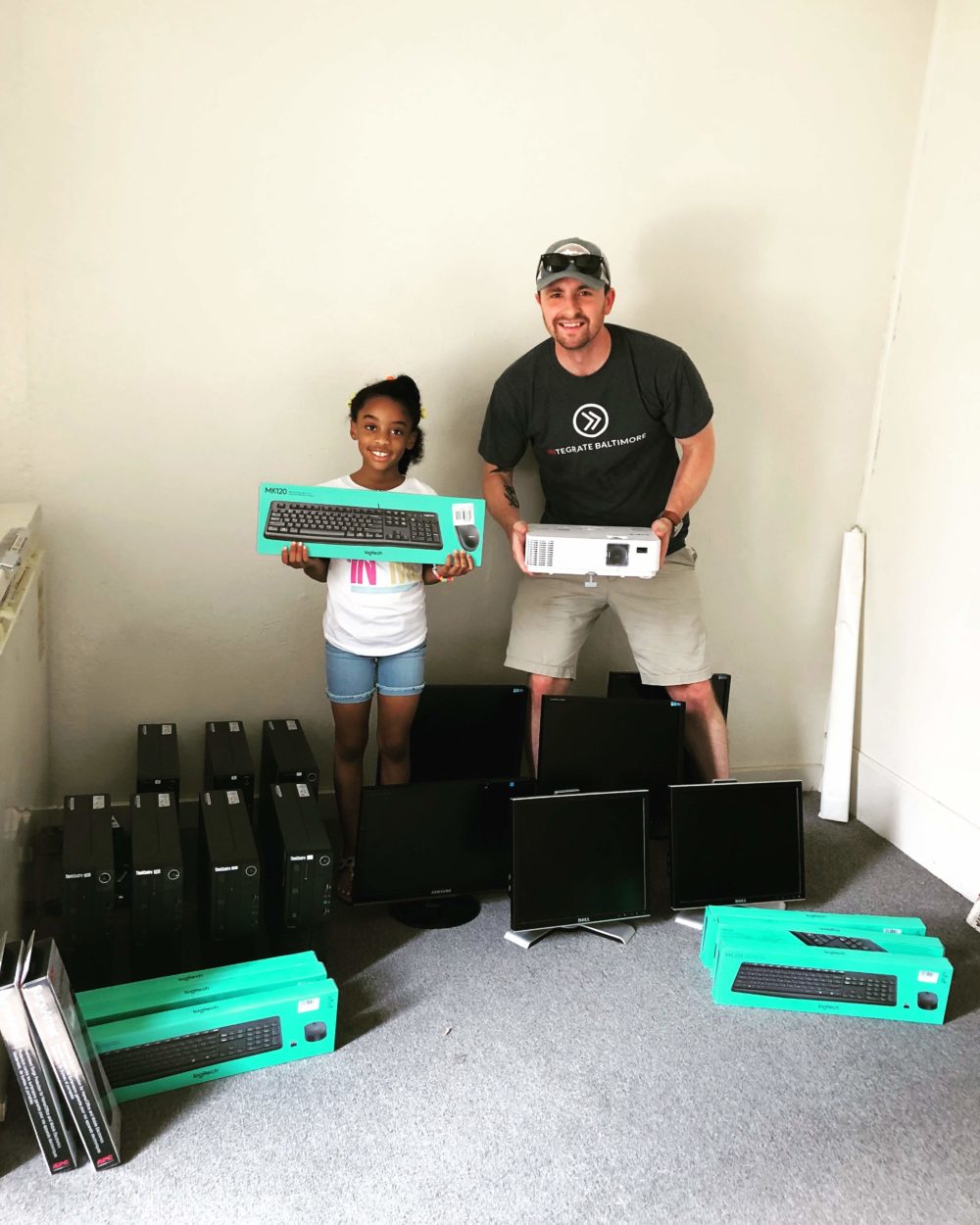 The Digital Equity Coalition is broken into four groups focused on policy and advocacy, device access, digital literacy and tech support and community mesh broadband. The coalition uses a central database of the requests each has gotten and aggregating requests they get, what they’re donating and more.

“You have a bunch of different groups who were doing separate things,” says Beck. “Now we’re trying to bring them all together to measure the impact.

“We went into this with a two-fold mindset: rapid response of getting people devices quickly to a mid-term plan of getting as many devices to people who need them,” he says. The mid-term plan, which is why the device drive started, has a goal of distributing 2,000 devices in two months, says Beck.

“We’re not going to solve (the problem of digital equity) in six months,” he says. “It’s going to be more of a perpetual thing.” That’s why the coalition’s “data-centric approach” is important, says Beck.

The collection piece helps coalition members understand what devices they can take as donations and give to others to use, while the logistics piece helps them get the donations from drop locations to refurbishers and the distribution focus includes prioritization of specific people or groups with the most need. One group within the Digital Equity Coalition has 700 device requests in its backlog, says Beck.

“The issue is as systemic as many of the social issues we face in our culture,” he says. “The pandemic has exposed social injustices and the lack of social fabric in some cases. The lesson that can be extrapolated from that is this is happening in every major city.

“It’s not just access to a computer that’s the issue. It’s that communities aren’t connected to the internet. Every city has to find a way to address digital equity and the digital divide. It needs to be treated as a utility,” says Beck.

“We built our society around the internet,” he says. “It’s not fair to say one people on one rung of the societal ladder don’t get access to it.”

Beck’s interest in digital equity started when he saw AV systems being pulled out of customers’ walls but no thought being given to how those perfectly usable systems could be repurposed for those who weren’t necessarily looking for state-of-the-art gear but still needed something to have online access.

“It was an unfortunate side effect of the industry, but I don’t think anyone knew what to do with it,” says Beck. “We are in many cases a luxury for a lot of companies. I saw the need in the industry because I saw the waste we were generating.

“The way to help offset our e-waste is to donate it to the community. This is hugely needed on both sides of the equation. The bigger issue to the e-waste is having us start looking realistically at the impacts we have in terms of waste and recirculating these devices,” he says.