HiPhi is becoming The Cabana Man—but he’ll never not be The AV Professional.

If you understood all of that, you are probably familiar with the work of Phillip Cordell, VP of technical operations at M3 Technology Group. He released “The A/V EP”—the first rap album dedicated exclusively to the AV industry—in 2012.

Now, he’s written a TV show about the pool and spa industry he’s calling “Prince of Pools.” The pilot recently premiered in his backyard at the Nashville Film Festival and he’s hoping it’ll catch on at one of the larger festivals—like Sundance—as he returns to a passion from his younger days: acting.

“Prince of Pools” follows what Cordell calls “a creative guy who needed an outlet” who then rapped about his day job and got some notoriety within a very niche demographic.

Cordell plays the main character, a late-20s man “with perhaps a sketchy past” who has to choose between chasing music superstardom and working for his parents’ pool and spa business. The pilot was shot last year “and it came out way better than I would have expected,” says Cordell.

“We intended for it to be just a proof-of-concept piece, but because it came out pretty well, we put it into some festivals,” he says. That includes the Nashville Film Festival, right in Cordell’s backyard. He’s submitted the pilot to the Sundance Film Festival and South By Southwest—but isn’t optimistic.

“It was fantastic,” he says of the Nashville Film Festival experience. “We had a great showing of loved ones and friends—and a lot of industry people from Nashville. “It’s pretty surreal to see your face up on a movie screen, but definitely one of those life goals things that felt pretty good.”

The competition at the Nashville Film Festival included pieces with budgets “10 to 25 times what ours was,” says Cordell, including some with actors from “The Office” and “Veep.” But he felt good knowing some friends and others he knew in Nashville didn’t even get picked for the festival and he did.

“In a way, I’m definitely following in the footsteps of Will Smith, aka The Fresh Prince of Bel Air,” he says. “He parlayed his musical talent into a sitcom which spring-boarded him into worldwide fame…and I’m hoping to leverage my TV pilot into preferred parking at my local Rafferty’s. So we’re pretty much the same!”

‘Prince of Pools’ Not Leaving AV

The early positive reviews of the “Prince of Pools” pilot doesn’t mean Cordell has any plans to leave the AV industry behind though.

“My heart lives in AV,” he says. “Regardless of whatever happens with this, I will always have a foot in the AV industry.”

Cordell started writing “Prince of Pools” about three years ago, swapping out the AV industry for the pool and spa industry in an effort to keep the things he talks about in the show from being too closely tied to himself or anyone else in the space.

After writing the original script, he sent it to a company called Script Pipeline for feedback.

“I figured they’d make a few suggestions but, on the whole say, ‘this is ready to go’—and that is not what they said,” says Cordell. “They basically gave it a big fat F and tore it to pieces and that’s exactly what I needed.” A local friend who works in TV “helped me punch it up and get it across the finish line.”

How Cordell Became Prince of Pools

Cordell took a Shonda Rimes master class on writing TV shows, although he had graduated with a bachelor’s degree in TV and film production from Middle Tennessee State University in 2007.

He also used a friend’s pool and spa store for filming the pilot, learning as much as he could about the pool and spa industry—and borrowed a few of his stories.

Cordell developed a show bible—plot synopses for 12 episodes and narrative art for a five season arc that includes character development.

“Things just kind of fell into place in a really cool way,” says Cordell. “We ended up with some really talented actors—way better than I am.” The show also features crew members from the show “Nashville.”

“We got tremendous bang for our production dollar in terms of the quality and expertise,” he says. Now he’s looking for a production or development deal, either on network TV or a streaming platform.

“It’s fascinating to see what goes on behind the scenes and how TV gets made,” says Cordell.

“Acting has always been something I’ve been passionate about and felt like I would revisit,” he says. He wrote the “Prince of Pools” pilot for about 1.5-2 hours every night after his wife went to bed.

Read Next: Inside the Minds of the Disney Tech Team: Behind the Scenes at Hollywood Studios’ ‘Wonderful World of Animation’

“If there’s something we want to do in life, there’s not really much stopping us,” says Cordell.

He hasn’t set a deadline on how long he’ll pursue an acting career.

“I think it’s something I’ll always have churning in the background,” says Cordell. “I feel like I’m at the beginning of this journey. I’m not sure what the journey looks like just yet. I’m not necessarily looking to move out to L.A. I like the life I have right here in Nashville.”

Speaking of not straying too far from his roots, Cordell put together a four-song EP “It’s Sauna Poppin’,” using the alter ego The Cabana Man. The new songs use similar beats and hooks to songs on HiPhi’s 2009 release “Nothing More to Say” and they come almost 10 years after “The AV Professional” video. 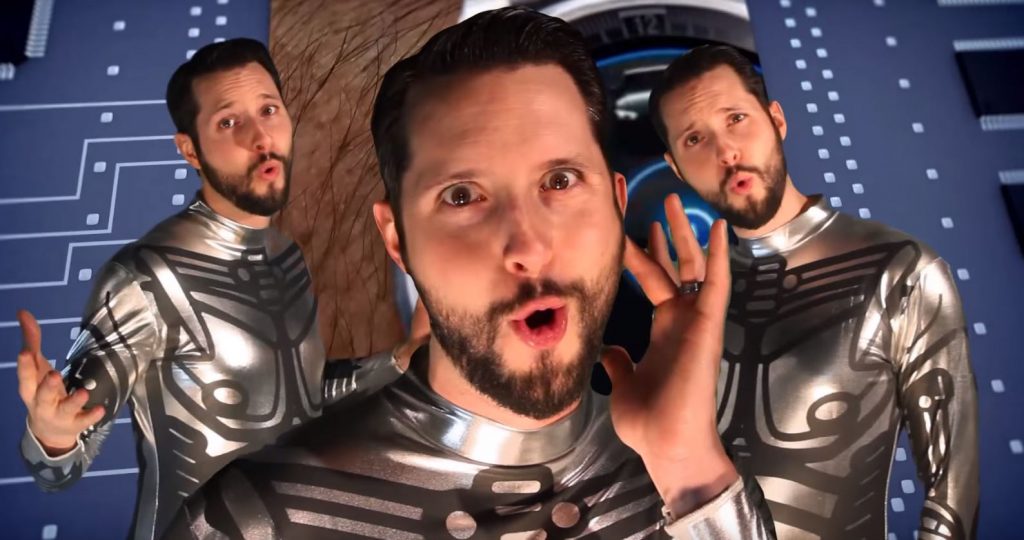