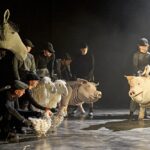 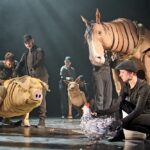 The ambitious production saw “War Horse” puppeteer Toby Olié’s puppets of horses, pigs, birds and more revolt against the human master. Here, onstage actors moved the puppets’ mouths in tandem with the pre-recorded dialogue. The dialogue was played back live. Additionally, the production team had to ensure accurate positioning of the audio script parts to each puppet as they spoke. This emerged as a key aspect of realism of the surreal piece.

“I knew from early conversations with the director, Robert Icke, that there would be very little live dialogue in this production, meaning that almost all of the audio parts needed to be mapped to the puppets within the soundscape wherever they were on the stage, and even when they moved,” says Gibbons. He adds that they had to convince audiences that the voices were coming from the puppets’ mouths. Only then would the experience be captivating and engaging. He continues, “To achieve this, the d&b Soundscape system was at the forefront of my thinking right from the start.”

Gibbons went on to install d&b Soundscape for the “Animal Farm” production. First, he road tested the capabilities of Soundscape at d&b audiotechnik’s Nailsworth U.K. base. He underlines two of its software modules, En-Scene and En-Space. Per Gibbons, the former allowed to perfectly position each piece of pre-recorded dialogue to each puppet. “Soundscape was the only viable solution with the object-based positioning power to program the complex on-stage dialogue as we needed,” he says.

Features of the System

Hockley expands from the perspective of loudspeaker placement. According to him, it is important to try and cover as much of the audience from every sound source, and repeat with all of the others. He continues, “The Birmingham Rep has quite steep raked seating, so we needed to think about dispersion. This is why we chose the Y10P with its wide horizontal dispersion as the main upward and downward firing loudspeaker.”

Also Read: d&b Soundscape Under the Stars at Historic Amphitheater

Hockley adds that with Soundscape, the front fill is especially important. He attributes it to its ability to pull the audience’s attention back down to the performance on stage from the larger, main loudspeakers flown above. Hockley then remarks, “This area needs a higher resolution because they’re closer to the listener, and the 44S fitted the bill. Subwoofer-wise, the B22-SUB left and right of the stage really helped to achieve that dynamic in the low frequencies and resulted in some really memorable moments.”

Going back to the production, Gibbons recorded the actors playing the animals in an acoustically dead environment in London. This occurred in the months leading up to the Birmingham Rep premiere. He then used the d&b En Space room emulation tool to add in reverberation signatures in post-production. Gibbons states they tried out few of the En-Space settings in different theaters ranging from small, medium and large.

He says, “I was keen to recreate the sound of the theatre we were in, taking into account its size, shape and variables, so that it sounded like the animals were speaking live in that space. Recording it dry, we didn’t get the acoustic energy that you get in a theatre, with a live voice in front of an audience. [But] En-Space managed to add that in really well. It gave the dialogue life and realism, along with complete consistency across all of the pre-recorded parts.”

Additionally, Hockley’s visits to rehearsals and get-in at The Rep supported the production. Hockley also points to his background in theater. He then continues, “[W]hen a show uses d&b products, I feel like I’m not only working for the manufacturer, but also as part of the production team. Soundscape is exciting new technology, and I want to learn how people are using it and help them to achieve their creative vision.”

Gibbons also expresses his enthusiasm for future projects with Soundscape. He exclaims, “Once you set up the system and the sound objects, assign them to the puppets and input the dimensions of the stage, it really is very easy to program. It worked brilliantly.”