With seating for 250 guests, the club replaces a microbrewery, and long before that, a 1940s-era bank, with a couple of the old vault rooms still intact.

The Sandman Comedy Club also features a main showroom floor, a mezzanine with room for 64, a full bar and kitchen—and a lot of character.

Sands took over the space just a few months before the COVID-19 shutdown and has spent the past 16 months refurbishing the space, building the stageand designing and installing the sound, video and lighting systems.

Following all health and safety guidelines, the club opened under limited capacity on April 29 with a week-long gig from American actor, author, and stand-up comedian Finesse Mitchell.

“We have a multi-use space with a lot of personality and decoration and a big balcony,” said Sands. “We need excellent spoken-word support for the comedians and we need top-level music support for many other uses.

“We’ve been very impressed with the sound,” he said. 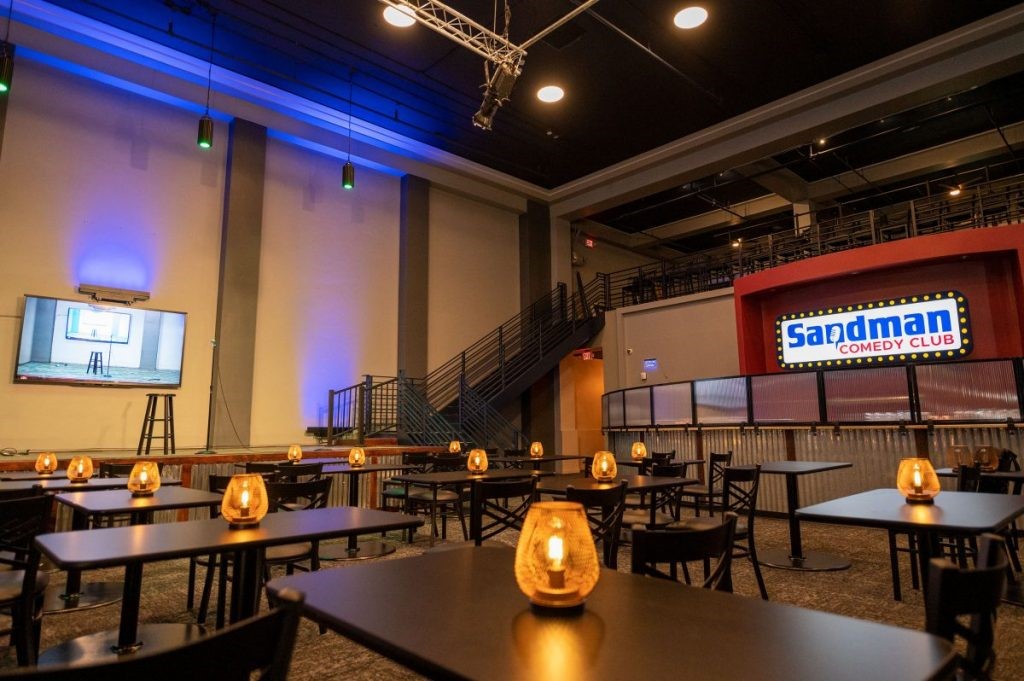 Inside the Sandman Comedy Club

The software allowed Syrovatka to evaluate how to best provide sound coverage for the entire space and address reflective surfaces.

To combat the challenging acoustics and maintain the club aesthetics, the CODE 3 AV team specified a Renkus-Heinz ICONYX Live system.

Because of the balcony, the beam steering capabilities of the ICONYX loudspeakers were critical, said Syrovatka. The club is a large square space with a 22-foot-high ceiling with the mezzanine beginning at the 15-foot level.

To address these challenges, Syrovatka coupled an ICL‐F‐RN digitally steerable loudspeaker with an ICLX-118S-RN subwoofer.

“I think everyone is going to be very pleased with the quality of being able to support musical acts as well as the comedians,” said Syrovatka.

The Sandman Comedy Club has a sound booth and will soon have a dedicated tech on staff to manage the AV and lighting during performances and events. The AV system is built around the Crestron DMPS3 multimedia switcher with a QSC Core 110F audio processor and operates from an iPad.

Additionally, the club can broadcast presentations if an organization wants to have a live event and share it remotely or record it for later use.

“Whatever Michael does on the show designer, he has the ability to capture presets on his touch panel,” said Syrovatka. “He can make changes and recalls without having to go back to the controller and the complex setup required for the various scenes.”

“The system worked flawlessly and the comedians (Mitchell and Matt Rife) raved about the sound quality,” said Sands about the opening weekend performances.

“Our customers said the sound was very clear and they could hear and understand everything the comedians were saying, which is very important to put on a good show,” he said. “Overall, we couldn’t be happier with the equipment and look forward to many years of great shows at Sandman Comedy Club.”