With safety measures limiting the number of fans who can physically attend university football games, one Midwest top-ranked football team lost a major component of home field advantage — the sound of 100,000-plus fans reverberating through their massive stadium.

To recover this advantage, a temporary distributed system of 66 Meyer Sound self-powered loudspeakers was deployed to reproduce the crowd with uncanny realism by applying dynamic sonic movements via the new Spacemap Go spatial sound solution.

“A crowd of 100,000 football fans does not produce a flat, static sound,” said Rob Snyder of Rob Snyder Productions, one of the originators of the college stadium concept.

“The sound is almost like its own living, breathing entity, something that pushes and pulls, that changes dimensions. We were able to simulate the effect in ways that would be practically impossible without (Spacemap Go).”

This stadium application was the brainchild of Snyder and Brian Jester of JCR Studio and Sound. The two had earlier discussed the potential for using Spacemap Go for audience simulation at smaller venues but later decided to present the concept to one of the top-ranked college teams.

Initial skepticism was overcome with a scaled-down demonstration, and the go-ahead was given to deploy a full, Spacemap Go-controlled system for the season.

The free Spacemap Go app can be used with one or more Apple iPads for pre-programmed or real-time dynamic panning of up to 32 inputs into 64 outputs using standard GALAXY Network Platform processors, either singly or networked in multiples.

“For this large-scale stadium solution, we only needed a single GALAXY 816 processor, and delivered the system on time and in budget,” said Snyder. 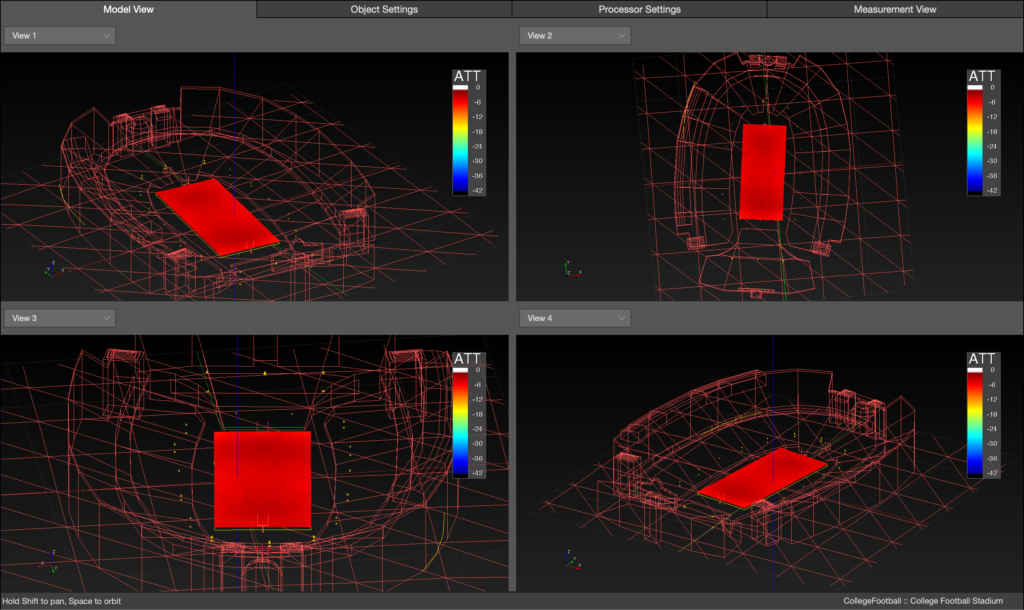 Inside the Spacemap Go Setup

To reproduce the crowd effects, Snyder and Jester consulted with Josh Dorn-Fehrmann of Meyer Sound Technical Services on layout of the loudspeakers as well as trajectory templates for Spacemap Go.

The loudspeaker complement, deployed in 16 locations around the “A” deck level, comprised 20 LYON and 32 LEOPARD line array loudspeakers along with eight 900-LFC and six 1100‑LFC low-frequency control elements.

Two more GALAXY 816 units were used for loudspeaker processing only and were not needed for Spacemap Go. All Meyer Sound equipment was supplied by Summit Pro Works of Dayton, Ohio.

“The football conference supplied all teams with a standard mono crowd murmur track, and stipulated the maximum levels allowed on the field,” said Jester.

“Higher levels were allowed when the ball was not in play, and fortunately there were no restrictions on how the sound could be dynamically spatialized to give the effect of a real crowd,” he said.

Meyer Sound’s Dorn-Fehrmann designed a Spacemap that varied levels from different locations, and also allowed Snyder — on the sidelines with a Wi-Fi connected iPad — to vary the effect in real time in response to action on the field.

A total of six input channels supplied the standard crowd murmur along with hand claps, crowd chants, the band, and reverbs.

“Dynamic trajectories are applied to the Spacemaps and provide the mandatory murmur track with a movement and a flow that mimics what a crowd would do,” said Snyder. “It creates a very realistic gameday environment for the players on the field.”