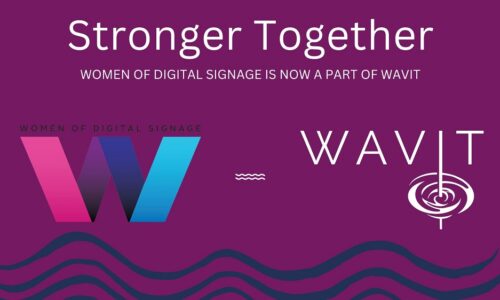 Women of AV/IT (WAVIT), a non-profit designed to empower women, has acquired Women of Digital Signage. The latter is a women’s organization dedicated to promoting networking, mentoring and personal growth. It will now be a sub-group of WAVIT to allow its members to continue to grow their network in the world of digital signage and beyond.

WAVIT officially launched on January 17, 2023. “I have served as a member of the Advisory Board of Women of Digital Signage since its inception; and it’s clear to me that there is a strong synergy between the two groups,” says Brandy Alvarado-Miranda, a founding member of both boards. “WAVIT is looking to create strategic alliances with similar organizations. This is the first step is creating a wider, stronger network of like-minded supporters. I’m looking forward to doing great work together.”