High-performing organizations tend to gravitate to one another as partners because their core values and operating principles often align so well. That’s certainly the case with experiential integrator Electrosonic and high-end LED display manufacturer SNA Displays. Their mutual clients benefit from the companies’ seamless collaboration across a range of vertical markets and application types. What all those disparate clients share in common is the desire not to “invest in technology” but, rather, to create an experience…to tell a story…to leave a lasting impression.

As Sean McChesney, director of business development, Electrosonic, puts it, “The overarching theme is these were all clients who had a specific environment where they wanted to deliver a meaningful piece of content.” As they always do, the Orlando, Fla.-based integrator and the New York-based digital display specialist delivered in spades.

According to McChesney, Electrosonic and SNA Displays first came together five or six years ago, at an InfoComm, when they found themselves with a mutual customer who “…required and expected an elevated level of excellence.” Immediately, the teams bonded over shared values: having pride in their work, standing by what they’ve delivered and, as McChesney puts it, “creating an experience that we believe matters to the community.” He laments that, in some cases, integrators are forced to point to marketing sheets and tell clients, “This says it should work.” With SNA Displays, he remarks, it’s entirely different. As McChesney describes it, “Working with SNA, it’s very much a partnership where we’re standing alongside [each other].” In fact, he adds, it’s common for SNA Displays engineers to actually be in the room.

Combine that with a warranty that McChesney describes as “exceptional” and it’s easy to understand why Electrosonic and its clients feel so confident with manufacturer. “We provide ongoing maintenance and support to bring that warranty into the fold and take care of the rest of the system,” he says. Given that SNA Displays’ products are usually the centerpiece of an overall installation, that kind of support is indispensable to achieving excellent outcomes.

An excellent outcome is exactly what the Whittier Public Library in California got when Electrosonic and SNA Displays came together to create an immersive digital portal. 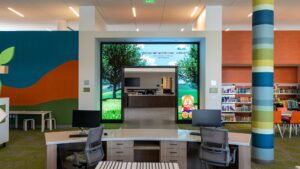 Initially, the library reached out to SNA Displays because it wanted a point of transition from the main library to a children-focused learning area. The display specialist brokered a dialogue between the client and Electrosonic, conveying the message that an LED product by itself — even a really nice one — could not sufficiently create the experience the city was after. That early communication in September 2021 came to enfold content delivery, the updating cycle and ongoing maintenance. Soon, the team drew up plans for two double-sided LED columns, each two-and-a-half feet wide, connected at right angles by an overhead LED section. With contracts signed by November, the team completed the $130,000 job this past April.

Without question, the LED video display system, which processes more than 2.3 million pixels, is a technical marvel. However, McChesney makes clear, “It’s technology delivered in a meaningful way.” The immersive digital portal seamlessly works with the library’s architecture, and the content aligns with the space. A third party, Render Impact, created the content; appropriately, much of it dovetails with historical artifacts that the library has had. McChesney says this was a big investment for the Whittier Public Library, and the team judged its success based upon library patrons’ reactions. Happily, the public was thrilled with the investment. With pride, McChesney refers to “…the kind of activation and inspiration that this portal brought to life in that space.” He adds, “It’s no longer just a hallway from one part to another. [It] really embodies that idea of learning and exploration.”

With the 140,000-square-foot AT&T Discovery District in downtown Dallas, Electrosonic had an entirely different challenge — namely, providing more than six months of design-consulting services to help the client map out and plan a unified experience throughout the plaza, with all elements, whether indoor or outdoor, fully synchronized. The Electrosonic Design Consulting team had to get this right before handing off to a separate integrator for installation. Highlights include a 104-foot 6K outdoor LED wall; an immersive, interactive, 30-foot sculpture; and a bevy of LED columns and videowalls in the lobby, plus immersive audio, digital signage and extensive lighting infrastructure. “While this is a massive scale,” McChesney acknowledges — he cites many millions of dollars in integration and content development — “the concept [of a seamless experience] is really consistent throughout a lot of the projects we deliver.” 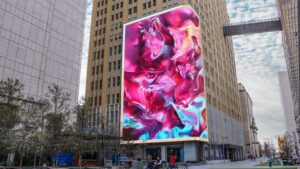 But that’s not to say this was any ordinary job! Facility-impact considerations (e.g., the massive amount of power required, the immense weight, signal management and routing) were paramount. McChesney verbalizes the questions that Electrosonic wrestled with, saying, “How are we going to put an LED wall on the side of a building? How are we going to integrate that with massive LED walls in the lobby?” He throws in another vexing question: “We have millions and millions of pixels we need to drive. How are we possibly going to break up the signal [and] break out all the different channels?” When SNA Displays came in as a partner, the companies unlocked their organizational synergies.

Electrosonic worked with the SNA Displays team to understand the true calculations for their products, collaborating to specify the right number of interface units, the proper number of channels, content-transmission distances and the necessity of satellite rack rooms. “They were pretty integral in being able to figure all that out,” McChesney readily acknowledges. Together, they conveyed that information to general contractor and electrical contractor personnel. Pithily summing up the teams’ shared goal, McChesney says, “When this goes up, it’s going to work, it’s going to last and it’s going to be safe for everybody.” Together, Electrosonic and SNA Displays achieved that goal.

Give Kids the World Village is not your ordinary client. The Florida-based, 89-acre non-profit resort caters to making wishes come true for critically ill children suffering from cancer and other diseases. Integrated AV is, of course, meant to be fun and create excitement; however, Electrosonic and SNA Displays’ respective histories with the organization, as well as its heartwarming mission, made this project very personal. “When you have the opportunity to do this [work] in the context of giving back to such a meaningful organization, there’s nothing that comes above that,” McChesney declares earnestly. Summing up Electrosonic and SNA Displays’ determination to serve those kids well, he recalls the organizations’ attitude from the outset: “There’s no one else on the planet who’s going to deliver this except for SNA Displays and, fortunately, Electrosonic.” 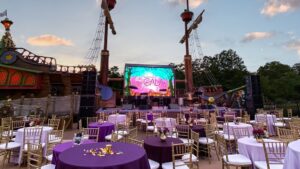 The centerpiece attraction is “Serendipity,” a themed pirate ship that is a hub for outdoor entertainment. The eight-month project, whose budget was about $100,000, entailed swapping out an outdoor projection screen and reimagining a once-dim display as bold, vivid and entrancing. “They wanted to update this to a display medium where they could actually use it all day and all night,” McChesney explains. “So, from that perspective, LED was the obvious choice.” Electrosonic selected a large-format SNA Displays LED wall that measures nine feet, 10 inches tall by 16 feet, five inches wide. The tight-pixel-pitch (3.9mm) videowall contains more than 980,000 pixels.

An outdoor display in Florida has to stand up to manifold environmental challenges (e.g., extreme heat, pounding rain, humidity, intense sunlight). What instilled confidence in Electrosonic was the genuine partnership that it has with SNA Displays. “Being able to have the trust in the product and knowing that we are standing there with the manufacturer as a partner really takes a lot of that burden off of us,” McChesney enthuses. SNA Displays is onsite, ready to help, ready to make it work.

The Odessa Brown Children’s Clinic (OBCC), part of the Seattle Children’s health care network, is another client that activated Electrosonic and SNA Display’s passion to serve. Lamentably, many modern hospitals don’t have much brightness, color or digital content. According to McChesney, the project’s goal centered on answering a key question: “How do we bring some liveliness into an often sad or melancholy environment?” He elaborates further, saying the team wanted to “…put a little life and color into some various high-traffic areas within the hospital.” With a $150,000 budget and a six-month project timeline, Electrosonic and SNA Displays got to work.

The project encompasses three SNA Displays videowalls in different areas of the clinic. The largest — the LED videowall in the lobby — is eight feet, 10 inches tall by 11 feet, 10 inches wide, and it boasts an ultra-tight, 2.5mm pixel pitch. The other two displays are located in the waiting room of the facility’s dental-hygiene center and in the behavioral health and rehabilitation clinic, respectively. The latter two are six feet, eight inches tall by three feet, 11 inches wide, and they have an even tighter, 1.88mm pixel pitch. McChesney describes the project as “phase one” of an overhaul for digital signage, digital touchpoints and activations throughout the clinic. As such, it’s a perfect opportunity to gauge the impact on hospital staff, patients and guests.

As for the content, it’s mostly biophilic. “These patients and individuals are going through enough stress already,” McChesney observes, adding that the goal of these digital activations should be to soothe and relax them. As such, the displays are populated with images one wouldn’t usually see or hear in a clinic — namely, nature, the ocean and other biophilic elements. Small media players — one for each display — that are housed in a central location supply this content.

As these projects illustrate, Electrosonic and SNA Displays know how to amplify each other’s strengths to deliver the best outcome for mutual clients. Part of that is, of course, having confidence in organizational knowledge and expertise; another part, however, is recognizing what your firm doesn’t know, and then earnestly working together to figure it out.

McChesney cites numerous instances when Electrosonic has brought in SNA Displays for help with technical issues related to display hardware. Conversely, SNA Displays has called in Electrosonic on many projects, leveraging the integrator’s expertise and service background. As all good partners know, it’s about complementarity, not competition. They work together in service of their mutual client.

McChesney closes with some words of wisdom for prospective clients. “For anyone out there looking to develop an experience, the technology decisions will come later,” he declares. “But the meaning behind the experience — what you want people to feel, to learn, to see, to do — you need to be able to articulate that as thoroughly as possible.” He adds, “[That’s when you come] to work with an Electrosonic and an SNA, and we’ll be able to figure out the right technology for your experience.”

As ever, we close where we began. What’s the secret to successful technology integration? It must have a purpose…a story…a meaning.