Whenever you get the chance to talk to Alan Brawn, principal of Brawn Consultant and digital signage and video technology thought-leader, you take it. Leading up to Digital Signage Expo 2018 in Las Vegas, Commercial Integrator got a chance to get Brawn’s take on fine-pitch, direct-view LED, why digital signage “engagement” is more important that even “experience” and the “Wild West” state of LED display marketing claims.

Following are edited excerpts of the interview with Brawn. Watch the video for the entire conversation.

We’re in the Digital Signage Expo season and it seems like indoor, fine-pitch, direct-view LED is driving the display category. Why do you think that is?

Brawn: There are really three things that are driving the growth. It might not be obvious, but let’s just talk about those three things. First of all, necessity who is the mother of invention. I love that because we do have a necessity here. The necessity that’s driving this invention, if you will, is the growth of video walls, which is probably growing at 2x and maybe even 3x of what the overall AV market.

We need something new to shout about in the commercial AV industry.

As they grow, we’ve seen a real need for large and robust solutions that are seamless and not affected by the environment, such as ambient light. When we talk about being seamless, the traditional LCD or even OLED-type video wall has the mullions or the gaps between the displays, and that can be distracting. So, when I talk about necessity being the mother of invention, this addresses one of the big issues, which is the seamless nature of a direct view LED. That’s No. 1

Fine pitch LED is an indoor technology. Unlike outdoor direct-view LED, that’s sold, primarily, direct from a manufacturer to an end user, this is all oriented towards being sold through the commercial AV integration market. For the first time, we’re seeing a direct view LED product getting away from the great big outdoor stadium-type applications. We’re getting into something that our AV integrators can sell.

The third reason is not quite so obvious, but I’ll share it with you anyway. We need something new to shout about in the commercial AV industry.

Let’s talk about the AV industry buzzword “experience” in the context of digital signage and your contention that “engagement” is just as important of a goal.

Brawn: Think about InfoComm changing the association name to AVIXA, it’s the AV experience. The experience is literally something that we come into contact with that does something to us, both intellectually and emotionally. Engagement is primarily something different.

Brawn: I like the way you described the direct view LED market as being the Wild West. It truly is.

How do we sort out the great products from those with inferior quality and service? Let’s not forget that service is a big issue. 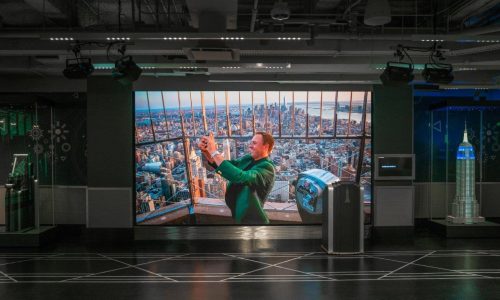 Related: These Misconceptions Surrounding LED Video Need to be Cleared Up
My advice is that the safe bet is to work with direct view LED companies that have a track record in the United States. A lot of these companies are doing OEM, original equipment manufacturing, for some of the major names that we deal with. That’s almost beside the point. My point is that we need to trust the people that we know and have track records, in other words, people you could trust.

One company that has recently gotten into the fine pitch game is a company called Lighthouse, with nearly 30 years of experience in large outdoor displays, for Dodger Stadium, the Seattle Mariners, Churchill Downs, the Indy 500 and displays like that. They’ve been marketed for years through Panasonic, using the Lighthouse name. Now Lighthouse has a whole separate division, and they’re entering this new market under their own name.