We took the new FS5 II and PSW-Z90 Sony Pro 4K cameras to CEDIA Expo 2018 to help us better capture the sights and sounds of the show — but we also figured readers would be interested in how well they performed at such a demanding event.

West Coast digital marketing professional Andrew Smith featured the cameras as central components in Commercial Integrator and CE Pro’s multimedia coverage of the show. Here’s what he had to say about their experience. 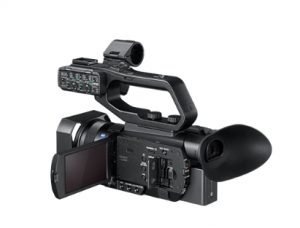 One of three new palm camcorders Sony Pro introduced towards the end of 2017, the PSW-Z90 incorporates the company’s Fast Hybrid AF system.

According to Sony, this technology helps to ensure accurate focusing and tracking during shooting through the use of 273 phase-detection AF points that cover more than 80 percent of the shooting area. 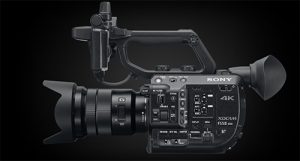 Sony Professional says that it recently expanded its selection of Large Format Sensor products with the launch of the FS5 II body and the PXW-FS5M2K lens kit.

Videographer Smith noted how he went through the cameras’ menu systems the day before the show, familiarizing himself with the Sony Pro FS5 II and PSW-Z90 4K features.

“Once you find things, it’s pretty easy… there was no hardware limitation, there were no extremely difficult settings I needed to find,” he recalled. “It just took a little bit of tinkering up front.”

The FS5 II is a more advanced camera, so it requires more from users to not only familiarize themselves with features, but to assemble accessories to meet usage demands.

One of the features Smith noted on the FS5 II was its built-in handle with user controls. He says he didn’t really have to use a gimbal or shoulder harness to comfortably use the camera while walking all around a large trade show floor.

Smith stresses a favorite feature built into cameras and their similar menus systems was the S and Q function that allowed him to switch between frame rates and slow motion without having to enter the camera’s menu system.

“You are able to toggle your frame rate quickly and toggle it back,” he explains.

“I thought that was one of the better features. Also, I didn’t use it much, but there is a built-in ND filter built into the FS5 II, which is great.”

Smith called the FS5 II a step up from prosumer level to a pro standard.

Smith says the PSW-Z90 is a point-and-shoot product with 4K capabilities. It’s one of the easiest solutions to use for “run-and-gun” situations where you don’t want to think too much about the content, but still want it to look good.

Smith admits the same basic comments could be said about the FS5 II, but because of its advanced capabilities, you have to be “more deliberate” using it.

He says the jump in terms of features and performance from the new Sony Pro 4K Cameras or Alpha Series products to the FS5 II needs to be accounted for in order for users to maximize its full capabilities.

“It is definitely the next jump before you start getting into the baby-Hollywood-level equipment.”