Maybe it wasn’t surprise, but there was at least a glimmer of delight in Justin Kennington’s eyes. The president of SDVoE Alliance had just taught a training session on Software Defined Video Over Ethernet (SDVoE) AV-over-IP standard at Almo E4 Experience event in Chicago, the first after Almo announced that it would offer SDVoE certification credits at its 2019 Almo E4 Experience tour.

“It was over 100 percent full,” Kennington said.

The overwhelming attendance at an SDVoE certification opportunity is sign of change. “We’re actually transitioning from that conversation into action,” he said. “Instead of AV-over-IP being an interesting concept and something that ‘I want to try’ or ‘Maybe I’ll use it in a smaller section of a bigger install,’ what SDVoE is trying to show the market is that we are the matrix switch transformed.”

In 2019, it’s not as if SDVoE has already overtaken traditional signal transmission solutions. 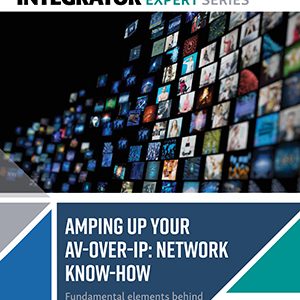 Related: Amping Up Your AV-Over-IP: Network Know-How
“This year matrix switches will probably ship 5 million ports. AV over IP, maybe somewhere in the hundreds of thousands,” Kennington said. “So really although we are talking a lot about AV-over-IP the market has still stuck with the matrix switch that we know, that is simple, that’s well understood because it’s 80 years old.”

However, he’s optimistic that views are shifting. “ With SDVoE we are bringing the only AV-over-IP system that can actually match the performance of a matrix switch – but also bringing a standard to the market so that integrators that attend E4 and system designers all over the world have something to point to and understand as the standard approach.”

That standard approach, he says, is critical as AV mores into more of an IT environment. “The IT community simply won’t tolerate the way we have these wall guards in AV,” he said.

SDVoE, he argued, is breaking down those interoperability walls. “SDVoE is here to change that and I think that is going to enable the inflection point that really starts driving the market, and not just the conversation.”