Think about the last time your company faced a major decision. Chances are the CEO, president or someone else in a cushy corner office had the final say, whether it was the possibility of working on a project or changes to employee benefits. 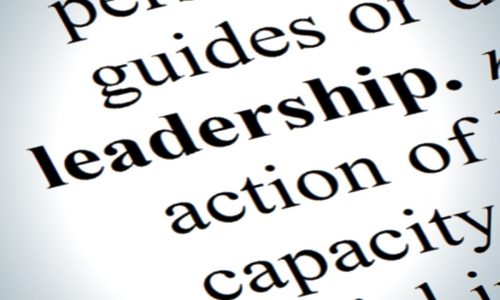 Related: Are You a Manager Or a Leader?

At ET Group Toronto, there isn’t any sort of management structure to get in the way of a good idea—or employee empowerment. In fact, while Dirk Propfe has the CEO title on his business cards, he’s one of 40 or so decision-makers who have equal footing in the company.

ET Group started this transformation to self-management about two years ago and earned a 2018 NSCA Excellence in Business Award for differentiating strategy for approaching business in a way that hasn’t been seen before in AV circles—and could be difficult to replicate.

And, while ET Group officials say the transformation will never fully be complete, the early returns have been good, to the tune of a projected 20 percent revenue growth in 2018 and more clients who are signing on as long-term fixtures rather than one-and-done ET Group customers.

For Propfe, 36, the decision to approach business in this more collaborative way left him at a crossroads.

After he finished a master’s program in Sweden called Master for Strategic Leadership and Sustainability, he told his partners he was only returning to the company if he was allowed to enact what he’d learned there, particularly from the book, “Reinventing Organizations” by Frederic Laloux. 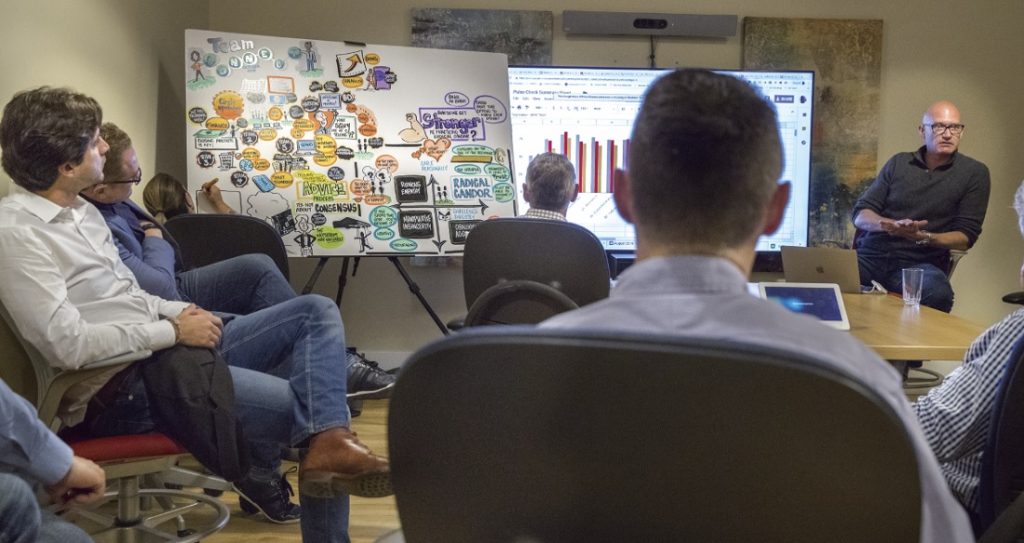 “The book showcased all these brilliant examples of organizations out there that, in a way, had preceded and included some of the great things organizations are doing,” says Propfe.

“It innovated key processes that really help liberate people within their organizations so that they can share their gifts with the world.

The book goes into details of structures and practices and processes of these organizations, and the mindset required from a leadership perspective, says Propfe.

“The experience in Sweden led to me needing—deeply from within—to do my part and help us as a species and society to reinvent how we’re doing business,” he says.

ET Group was struggling to find enough work to pay its bills so perhaps that helped Propfe’s partners decide they’d rather do something else and let him enact his vision.

With emotional—and financial support—from longtime ET executive Brad Flowers, Propfe was able to become one-third partner in the company and buyout the other owners who didn’t share his vision.

Change for the Better

Almost two years later, ET Group is finding more long-term relationships and opportunities with its clients rather than doing a series of one-off projects—and empowering employees to make important decisions that keep them engaged and help the company become even more successful.

“We were growing from a financial perspective, but the company started dehumanizing,” says Propfe of how ET Group operated before the transformation began.

“All these pressures started disengaging the staff. All this friction happening. It got to the point where it wasn’t fun to come to work.”

Propfe understands the skepticism around ET Group’s new approach to business, but he certainly embraces it. His father is an entrepreneur who created an organization based around his lifestyle.

After Propfe finished a master’s program in Sweden called Master for Strategic Leadership and Sustainability, he told his partners he was only returning to the company if he was allowed to enact what he’d learned there.

“He firmly believes that the only limits we have are those we set ourselves and that we need to experience the world with our senses, and not believe everything that our mind is telling us,” he says.

This mindset isn’t necessarily for everybody, and from a business standpoint it can be stress-inducing.

“When things get scary, it’s very easy to revert back to old habits,” says Propfe. That fear led his partners to leave ET Group and “freed up necessary mindset,” he says.

As part of the transformation, ET Group eliminated all management roles, all commissions and some HR functions that are considered standard and necessary in most businesses. 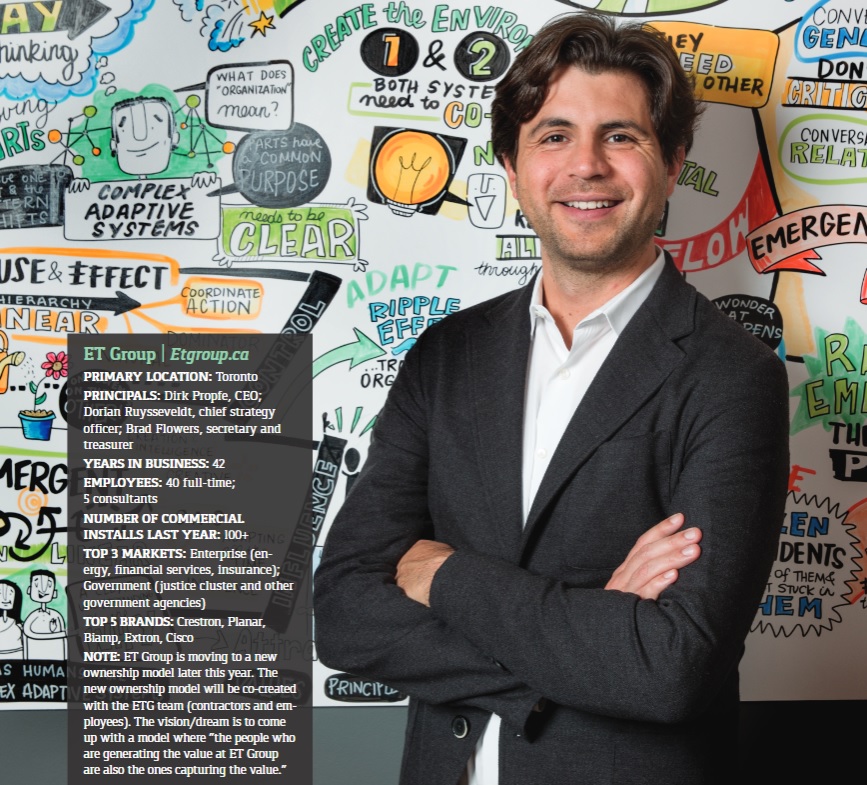 And, while he has a traditional-style title, he also “energizes” several other roles within the company and only retains that title as a way of helping outsiders understand his primary focus.

“At the beginning, I was wondering how it was going to unfold, but I saw this as a new frontier and new way of looking at things that would open up a lot of space for opportunity and really become a disruptor,” says Ruysseveldt.

“We were able to shift around to really focus on the customer and take a client-centric approach. It feels so right.”

Part of the goal is to empower employees to help the organization in ways that might not be defined under traditional roles.

“A lot of our work isn’t driven by titles. It’s driven by roles. In this construct, we have the ability to take on many roles.

“Oftentimes, the focus is around what their needs are. We want to understand their business pains to be able to weave people, spaces and technology together,” Ruysseveldt says.

Certainly, Ruysseveldt wasn’t alone in being unsure of what Propfe’s idea would mean for ET Group, but employees bought into the transformation—and it’s paid off for them.

“The reality was we were in a challenging situation, so we had to do something to shake things up,” says Propfe.

“There was definitely resistance along the way and we made many mistakes at the beginning. We quickly learned each organization has its own journey, so you really need to figure out what makes sense for your own organization.

“This transformation is more of a realization you either evolve or die. We’re never going to be done. We’re continually evolving to better deliver on our purpose. These systems allow us to evolve at a faster rate.

“Evolution is no longer tied to a few leaders across the organization who have a great idea and want to execute it. We’ve decentralized innovation.”

Better for Everyone at ET Group

Flowers, who serves as secretary and treasurer for the company he once ran, is impressed with the transformation. “Dirk definitely took what I did when I ran the business to a new level,” he says.

With all employees retaining equal decision-making power under the “advice” process that has them talk to fellow employees who will be affected directly by decisions they make, Propfe sees an employee stock ownership plan as the next natural step in ET Group’s evolution.

“In a way, what we’re doing is a philosophy, acknowledging all of us have real talent,” he says. “If you have a clear purpose with real talent, it’s a matter of figuring out how to organize so you can do amazing work together,” he says.

“People really want to make a difference. Instead of putting management layers to force people to perform, just enable them to perform and nourish their intrinsic motivation to do things right. It needs to be the right people who are doing things for the right reasons.

“Compensation and salaries need to match the value they’re bringing, but it doesn’t need to be very linear incentive program.” 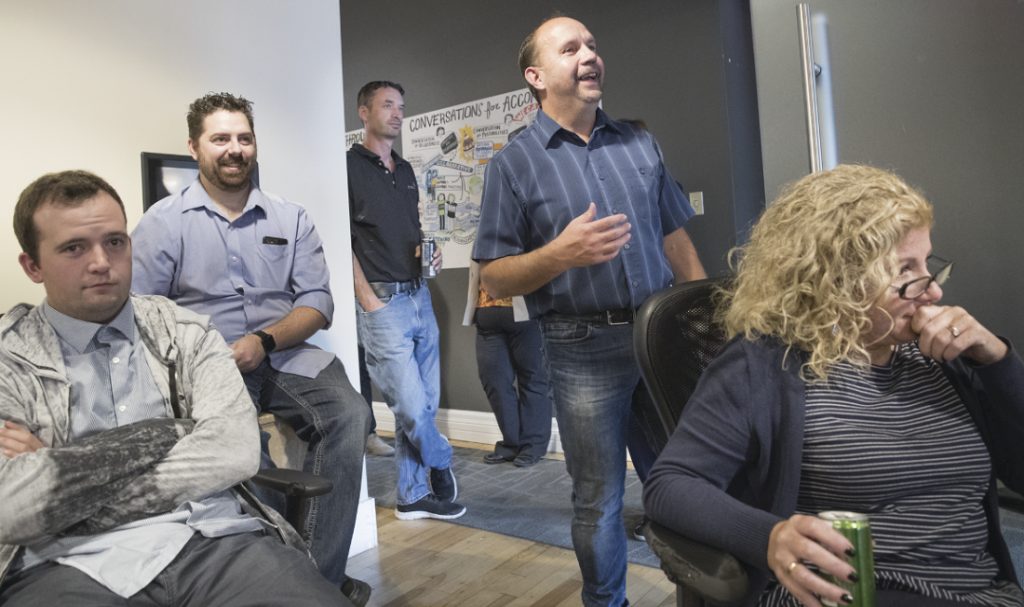 ET Group recently held a meeting for all employees at its Toronto headquarters, where employees talked about the future of the growing business. We’ll see if any great ideas emerged from that all-day session.

A New Way of Thinking at ET Group Toronto

Propfe isn’t anywhere close to the sole decision-maker for ET Group. In fact, there are some decisions he’s not involved in at all. That’s because of the “advice” process that empowers all employees to make decisions they believe will benefit the group.

“Everyone here could make a major decision,” says Propfe, “but certain people are more comfortable than others.”

Ruysseveldt says the focus at ET Group is about “collaboration, connection and communication.”

ET Group eliminated all management roles, all commissions and some HR functions that are considered standard and necessary in most businesses.

“[Our structure] creates a dialog with our customers and that’s very welcoming,” he says. “It brings things to a human level.

“It’s not about an organizational structure. It’s about how people work together and collaborate. It’s opened up a differentiator.”

“This really allows us to do it ourselves and be an innovator. Not only can we help clients with our business, but we can inspire them. It kick-starts all these wonderful strategic conversations.”

Flowers had many conversations with fellow NSCA members about ET Group’s structure and he wouldn’t be surprised if one of them eventually follows their lead, but he acknowledges it’s a challenge for those in the AV space.

“The companies in AV are so complex,” he says. “You have to think about the sales group, the business group, the installation group and warehousing.” 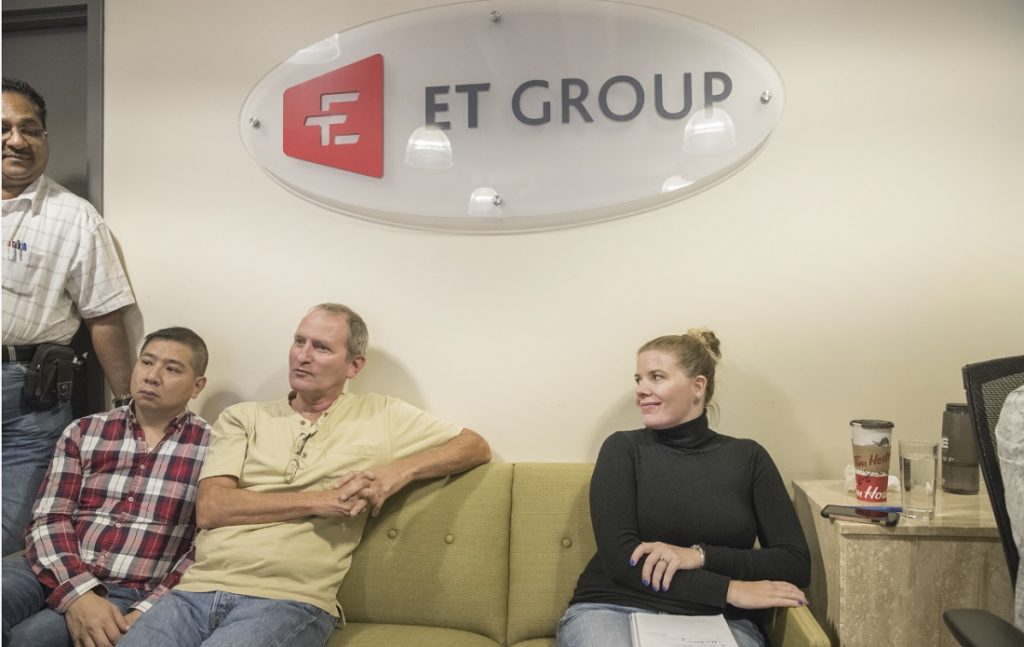 Ruysseveldt expects to see the philosophy catch on as ET Group continues its success.

“It translates into what the clients need and want,” he says. “It elevates the delivery of everything that’s being done.”

Propfe calls it “a necessary evolution” for ET Group.

“There are leaders out there who have a mindset ready for this who will invite this transformation and go through their own personal transformation,” he says.

“Five years ago, I was a different person. You really have to unlearn a lot of patterns you learn in business school. Those who do will thrive.”

While the transformation of ET Group has come with plenty of challenges, Propfe is glad he made it a priority. “This has been so necessary,” he says.

“It’s allowed us to show up in such an impactful way. I don’t see any other way we could have done what we did. The impact is massive. We’re in the early stages of how big this transformation is going to be. It allows us to recognize the constant need to evolve faster.

“By being able to be so customer-centric, we’re no longer talking about projects. We’re talking about multi-year, multi-million dollar engagements. It’s transformational. It invites you to get to know your client better and help them even more,” says Propfe.