Regardless of politics and how you feel about President Trump’s championed 2017 Tax Cuts and Jobs Act, you have to feel good about what Almo Corporation is doing with its freed up capital.

The distributor, and parent of Almo Pro A/V, says it will use the savings to reward every employee that was employed by the company on February 18 with an incremental bonus of $1,000 and to support its plan to expand and upgrade its workplace environments.

Related: CI State of the Industry 2018: The Incredible Shrinking AV Industry
Given that Almo Corporation had about 700 employees on February 18, that’s a $700,000 investment.

“The new tax law lowers taxes on our business, which gives us the ability to give back to our employees and invest in our technology infrastructure and partner relationships,” says Warren Chaiken, president and CEO, Almo Corporation, in a press release.

“We are rewarding our employees with an incremental bonus of $1,000 as they are the greatest asset we have to offer as a business. We also have a plan in motion to continue upgrading our corporate headquarters, sales offices and warehouse facilities.”

“All of our offices have been significantly upgraded, and we’re just finally finishing the upgrade on the Baltimore office, where we moved to a new space. We are going to be hiring a lot of people this year. We’re going to double the size of our new business team, so there’s a lot going on.” 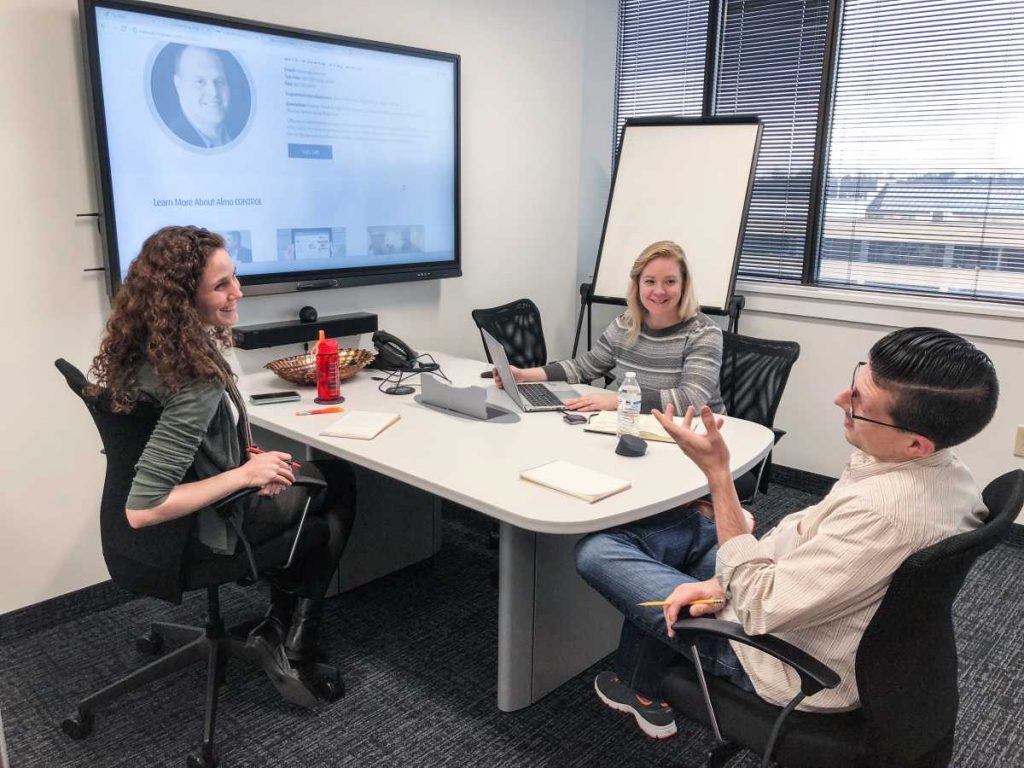 The plans were in motion before the 2017 Tax Cuts and Jobs Act, but Almo Corporation is embracing the opportunity to support its investment in better workplace technology for its employees – after all, pro AV is a big part of its business.

“Getting to use the solutions daily really helps you understand what your folks are doing up there,” said Sam Taylor, of investing in collaboration technology for Almo Pro A/V meeting rooms.

All three of their offices have moved recently to support expansion. A year ago it moved its Florida office into a new space with huddle rooms and meeting spaces in Fort Lauderdale.

Taylor described the space as allowing employees to move away from big cubicles and into a “very modern environment with more square footage.

Two weeks prior to kicking off its E4 AV Tour, Almo Pro A/V moved its headquarters near Baltimore after outgrowing the facility it had been in for five years. The new space, however, offers a “beautiful view of the reservoir, Taylor said.

“It’s great. It’s almost all glass, so it’s open-air, and our folks really like it. There are huddle rooms for when you need to have private meetings and a conference room. It’s just a really nice — and a lot more room to grow now. We have about 20 employees in our Baltimore office, but this’ll give us the ability to grow to about 50 there.”

The new space also allows Almo Pro A/V employees to live, work and breathe with a lot of the technology that it offers to their dealers. In some cases, Almo employees enter a meeting room or huddle space and use an Avocor, Sharp or NEC display.

Barco ClickShare is employed in most meeting rooms. Some use Biamp Devio, which Almo Pro A/V recently began distributing.

“Getting to use the solutions daily really helps you understand what your folks are doing up there,” Taylor added.