Only 9 percent of the 3,200 people who answered a survey on the Blind anonymous professional network expect their work schedules to go back to the traditional 9 a.m. to 5 p.m. setup under which they’ll be expected to be in the office five days a week.

Four of five see the hybrid model, in which some employees will go to the office but many will work from home or wherever they are on that particular day, as the future in the long term, not just until the effects of the coronavirus pandemic subside.

Sundar Pichai, CEO of Google’s parent company Alphabet, is the latest high-profile leader to embrace the hybrid model as the future of work and the company is reconfiguring its offices to accommodate the change.

The Blind survey of its 3.6 verified users conducted Friday through Monday showed that only about 10 percent of respondents expect their companies to go fully remote. About 45 percent of the survey respondents say not being able to get together in person “negatively affects their work.”

Related: Poly Says Hybrid Work Will be the ‘Next Normal’

That’s led by 64 percent of Facebook employees, 63 percent of Google employees and 56 of Uber employees who believe the loss of the team dynamic has hurt their work since the pandemic started its sweep around the world.

In the Blind survey, one Lyft employee said the absence of togetherness with coworkers when they’re working from home means “brainstorms/ fruitful chance encounters don’t happen.” An Apple employee, though, says, “everything we need to do can be done via WebEx.”

While both of those are solid business reasons for and against having the full staff return to the office whenever it’s safe to do so, some respondents’ reasons have nothing at all to do with a specific project or client.

One SourcePanel employee, for example, says, “I’m social. I want to hang out with my coworkers.” 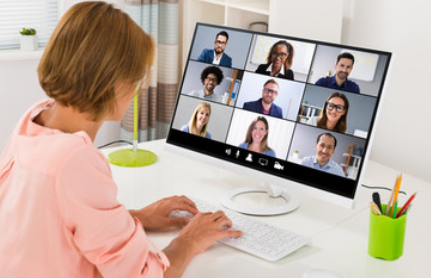 Back to the Office, Work from Home or Hybrid

This is a debate that’s not going anywhere anytime soon. Companies across the U.S. and around the world are at different points when it comes to welcome all or some of their employees back to the office in both the short and long term.

I’ve never been a huge fan of working from home. I like the “buzz” of the office and having a better idea what’s going on not only with my direct co-workers but also with the company as a whole. At the same time, I’ve gotten used to not having a commute since mid-March and that’s been nice.

I’m not sure when I’ll be back in the office full-time and what it’ll be like to return after more than six months away. I’m guessing it’ll take a bit to rekindle the vibe that existed when we left, especially since there’s no telling if the full crew will be there when I’m back.

One thing is for sure: office life has changed forever and AV integrators continue to have a unique opportunity to capitalize on the changes that are happening now and will be for a while.