It’s clear from our 2020 State of the Industry research — and from the conversations we have both at trade events and on the phone with those in the AV integration industry — that there are some companies which have fully embraced the switch to an AV service revenue model… and some that never will.

Whether it’s a matter of not being willing to put in the time to make the transformation to uncertainty about how to pay sales staffers who are used to commissions tied to how many boxes they sell or just a genuine disbelief that such a shift is necessary at all, the objections seem to run the gamut.

But it’s becoming increasingly clear that the clients who are looking for AV integrators to outfit their conference rooms, classrooms, hotels, hospitals, etc. with technology also want those integrators to be there for them when something goes wrong.

It’s becoming increasingly clear that clients looking for integrators to outfit their spaces with tech also want them to be there for them when something goes wrong.

Everyone has become conditioned to pay for subscriptions in other industries, whether it’s for their cell phones, subscriptions to TV streaming services and even the right to listen to millions of songs at any time they want, so why hasn’t the AV integration industry had the same success in launching it in that space?

Will 2020 finally be the year when we see AV service revenue take hold in a meaningful way in AV?

It doesn’t look that way based on our survey results that show about 70 percent of respondents have 10 percent or less of their revenue tied to service contracts.

By 2025, about half of those people say they’ll be in the 0 to 10 percent range when it comes to managed services, with another third in the 11 to 30 percent range.

So maybe we’ll just have to wait a little longer to see some real traction when it comes to recurring revenue in AV.

“Every industry in the world is moving to a recurring revenue model because it’s the right model,” says AVIXA CEO David Labuskes. 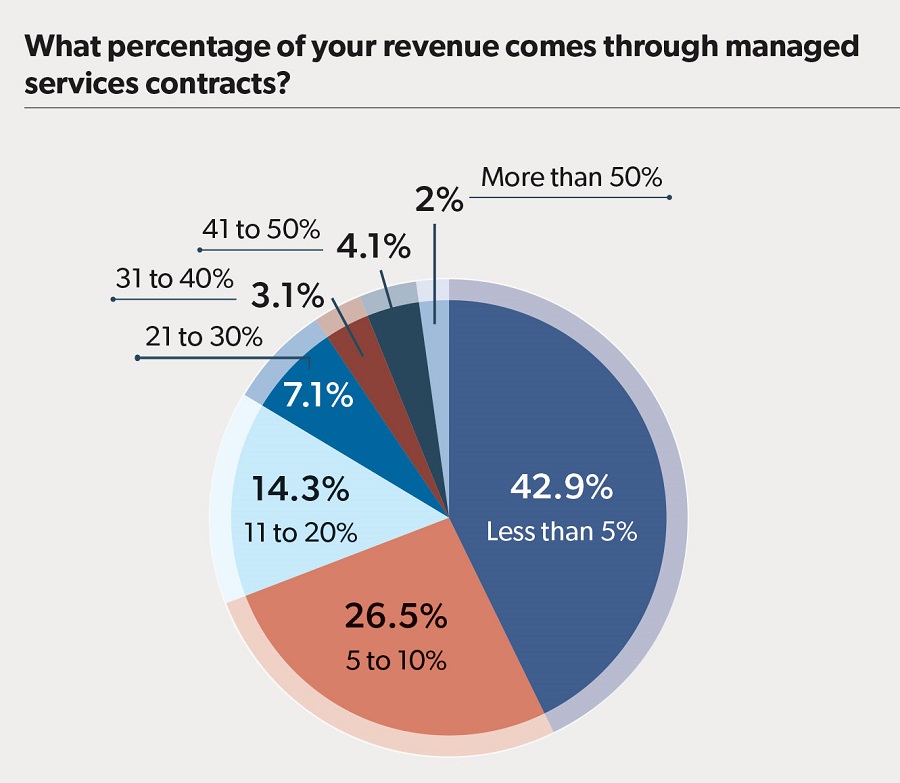 “So many integrators have built a business that’s based on selling 20 widgets this year, 25 widgets next year and 30 widgets the year after that. You start every year with zero sales. That’s a horribly difficult way to do business,” he says.

Yet, he sees AVIXA members continue to struggle with the concept—and especially the execution.

“Those muscle memories, those business presumptions, how we’ve defined our value for decades all need to be challenged and rethought,” says Labuskes.

“There’s a new product set, there are new compensation models that are required.

“You have to examine your whole business if you want to truly shift to fully developing a recurring revenue model. It begins to be an iterative process – from warranties to maintenance, from maintenance to managed services, then potentially moving into AV as a Service, which is still being defined by everyone in the industry,” he says.

How to actually pull off AV service revenue

AV as a Service could be a simple shift from billing AV as a capital expenditure to billing it as an operating expense or it could be a consumption model, similar to how most companies deal with photocopiers, says Labuskes.

Confusion about AVaaS have some questioning its necessity.

“What I don’t think is a good strategy is acknowledging, ‘the path from here to there is difficult so I’m not going to take it,’” says Labuskes.

“Our industry’s buyers are going to compel this. We need to follow them and manage and mitigate risk while we do it. Market forces cannot be denied.”

NSCA executive director Chuck Wilson echoes more than 40 percent of survey respondents who say they don’t have a support system in place to sustain the shift from a project-based model to one rooted in service. 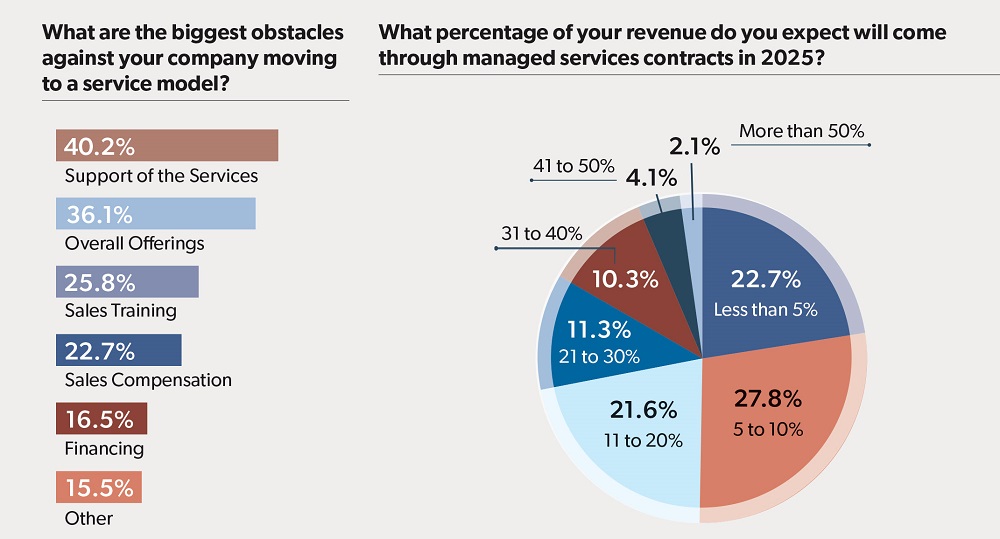 “They don’t feel like if they offered a program, they’d be able to live up to it,” he says. “They just aren’t in the service business. They put in systems. They hope that the phone doesn’t ring that something went bad. They’re ill-prepared for those service calls.

“The other thing is how do you compensate people that drives their behavior toward selling recurring services? Companies are in a reactive mode. They’re waiting until enough of their customers are requiring an as-a-service model, then they feel like they can turn the switch pretty quickly,” says Wilson.

It probably won’t be that easy, though.

“I’m not sure they understand how complicated that business model transformation can be from going from where you’re project-centric and project-minded to becoming a managed services provider,” says Wilson.

Related: State of the Industry 2020: Don’t Get TOO Comfortable

“We’re making sure all the things we’re doing are getting people properly prepared for when that time comes. We go all the way from companies that won’t even bid on a project unless there’s back-end AV service revenue to people who are hoping the clients don’t ask for it,” he says.

“We have to make sure our members understand the benefits of doing this and the stickiness they get with the clients. We’ve talked for years about how to do it at Pivot to Profit and other events, but we have to reinforce the why,” says Wilson.

The transformation is costly, but here are some suggestions

A copy machine salesperson would be a perfect addition to an AV company that’s moving toward a service model, he says. NSCA partners with Great America Finance to help integrators manage the cost of the transformation, says Wilson.

“The biggest obstacles I see are supporting the promise, sales compensation and financing,” he says.

It’s not coincidence that two of our recent Integrators of the Year are particularly strong in their managed services approach to the business.

Diversified boasts three network operations centers because AV isn’t a strength for many of the clients they’re serving and they need to make sure those companies don’t have any issues and that they can respond quickly if something unforeseen happens.

“The sheer numbers of some of these companies can overwhelm an IT help desk,” says Diversified executive VP Tom Spearman. It can also help in times of economic recession, says Diversified president Kevin Collins.

Bill Warnick, CEO of 2019 CI Integrator of the Year Solutionz Inc., ties a projected uptick in managed services among AV integrators to the idea of mergers and acquisitions remaining a key part of the AV integration industry landscape going forward.

“There may not necessarily be more adoption, but there could be less competition,” he says. “I would hope that people see the writing on the wall. I’d love to see us all be developing service offerings. It just keeps us healthy, keeps a good competitive environment, keeps us all on our toes.”