Conference Technologies, Inc. president and CEO John Laughlin and AV Nation founder Tim Albright have been talking for a couple of years about ways for their companies to work more closely and help each other reach new and more diverse audiences in their work across the AV industry.

Those talks turned into CTI’s recent acquisition of AV Nation, all in an effort to deliver better information to its customers.

“I’ve known Tim for quite some time and I’ve been impressed by his organization and what he’s built,” says Laughlin. “We’ve been talking for the last couple of years about putting some synergies together.

Related: Why the Industry Loves John Laughlin (And What Integrators Can Learn from the Way He Leads Conference Technologies)

“Besides the obvious, there’s a need: CTI needs to build more interesting and better materials for our customers. That’s really similar to what AV Nation does. They’re an information house at the end of the day. We felt by coming together, we can deliver a better product on both sides of the fence,” he says.

Albright says the move represents a slight shift for AV Nation to focus more on end users in its content.

“I’ve made no secret I came into this world as a tech manager and I have a lot of love for the people who are on that front line,” he says. “In the last 10 years, IT departments are really driving the decisions in the AV space and holding the budgets for AV systems. Call it convergence if you want.

“Becoming an education house for those end users is incredibly interesting,” says Albright.

Laughlin says he’ll take a largely hands-off approach to AV Nation but Albright plans some “subtle adjustments” to the business after the acquisition. That doesn’t mean the popular AV Week podcast will become CTI Week, but there could be a CTI Week podcast at some point, says Albright.

“If John finds value in what we’re doing, why would we change them? For the vast amount of listeners, there won’t be any changes,” says Albright.

Laughlin embraces the AV Nation approach and believes it will help CTI generate “more valuable materials built for the industry.

Albright sees his work as a CTI employee as “an opportunity to become a trusted technology partner.”

“Part of the value in the content we create is providing information and consultation to a client,” he says.

The AV Nation brand will be sticking around for a while—and so will that ubiquitous AV Nation chap stick that’s become the envy of every other booth at trade shows since it was first introduced. Albright became an official CTI employee last week when he got his Nerf dart gun and already had his first war.

So while there’s plenty of synergy between the two St. Louis-area companies, don’t expect Laughlin to launch a takeover of the AV Nation podcasts any time soon.

Albright compares the acquisition to the structure of Comcast, which owns NBC and also Universal. AV Nation is most definitely part of CTI now but it’s only one small piece in a much larger puzzle that saw him go from a company of three employees to one with more than 450.

Albright, by the way, won’t be returning to his programming roots with his new company. Laughlin sees AV Nation as helping CTI garner a bit more publicity, simply because it now has Albright to preach its gospel.

“Conference Technologies has been a little bit of an under-the-radar company,” says Laughlin. “That’s kind of been by design. That’s my personality. We’ve been growing rapidly for multiple decades in that environment.

“Nobody knows who John Laughlin is but everybody knows who Tim Albright is. I don’t want to candy-coat that that’s going to benefit us over the next five to 25 years,” he says.

AV Nation will keep its recording studios for now but could eventually relocate its full operations into a CTI office, says Albright.

“You have to understand what you don’t do well. There are aspects of running a business I don’t do well. I don’t have to do them anymore,” he says with a laugh.

But why join an integrator rather than another AV media company?

“I don’t recall how many times we’ve been offered to be purchased,” says Albright. “This is more than just selling an integrator. It’s about joining forces with someone I like and respect. If John Laughlin happened to own a trade pub, that’s who I would have sold to. It excites me to get on Teams every morning and learn from these people.

“You miss that collaborative experience when you have a smaller team. There’s a value there sometimes people miss,” says Albright. 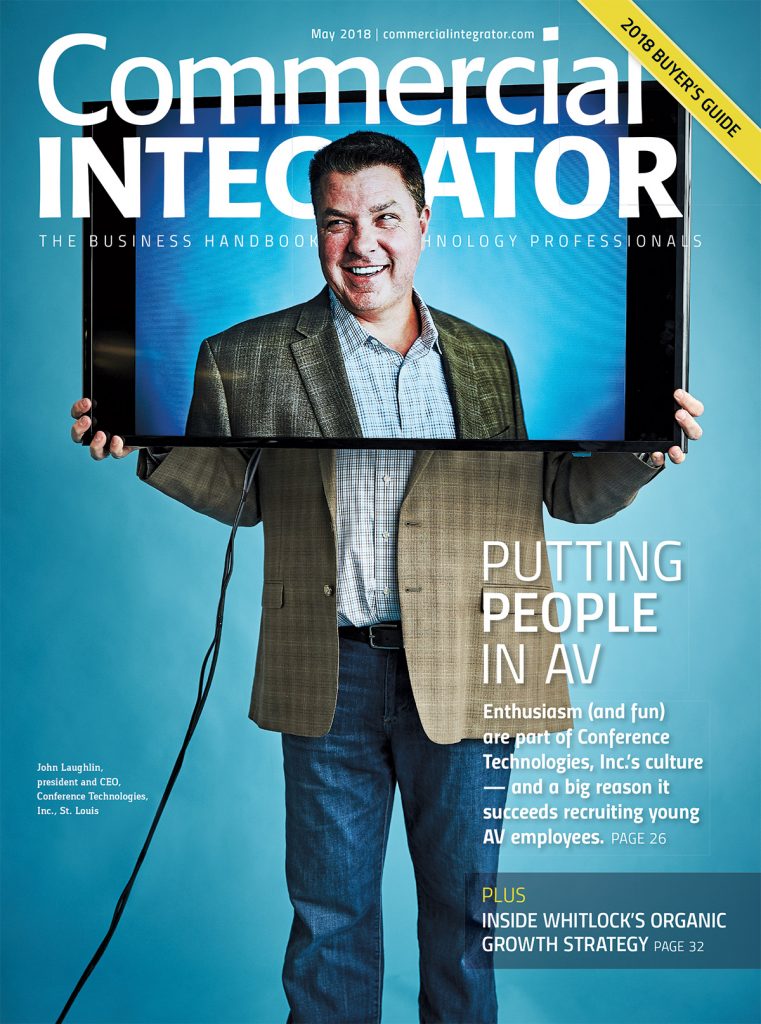 In May 2018, Conference Technologies helped us focus on the value of company culture. Photo: Jay Fram