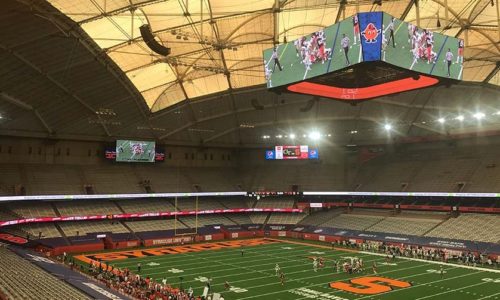 Syracuse University went big with its new LED display system as Daktronics has provided the Carrier Dome in New York with the largest center-hung system in college sports.

Six additional end zone displays were also installed at the Carrier Dome, bringing the total to more than 9,300 square feet for the entire project.

On the underbelly, a ring display measures roughly 6.5 feet high and stretches around the inside of the center-hung video board, totaling 216.5 feet long.

“We worked very closely with Syracuse University representatives, Geiger Engineering and Haynor Hoyt Companies to come up with a unique design that will wow fans and provide a one-of-a-kind in-venue experience for all who enter the building,” said Daktronics sales representative Scott Wilson.

“We did not start out with the goal of building one of the largest center-hung systems in the world, but the more we talked through it with the team, the more we realized that we could accomplish something very special while still remaining within the project budget,” he said.

“Besides the new center-hung, there are new high-resolution end zone displays to enhance the viewing experience in the building,” said Wilson. 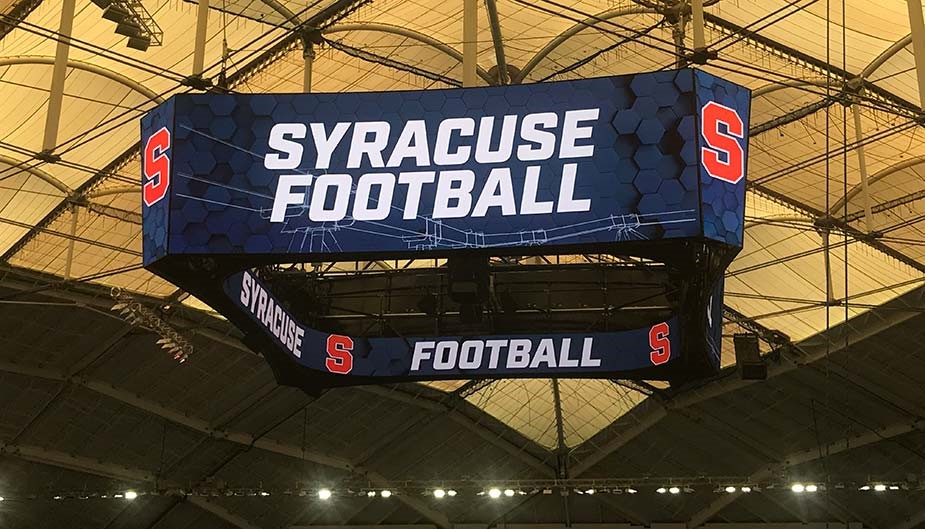 Inside the Carrier Dome

All displays feature 10-millimeter line spacing to bring excellent image clarity and contrast to fans in every seat of the Carrier Dome.

Each of the main video displays is capable of variable content zoning allowing each to show one large image or to share multiple zones of content including live video, instant replays, up-to-the-minute statistics, graphics and animations and sponsorship messages.