Analog Way’s Picturall media server and VIO 4K multi-format converters “will enable the 8K projector to input conventional sources and display multi-window content to convention-goers,” according to the press release.

The INSIGHT LASER 8K projector “will be the centerpiece of DPI’s exhibit in Room S115LMR facing the company’s booth in the lower level of the South Hall of the Las Vegas Convention Center,” according to the Analog Way announcement.

“The products Analog Way develops give us flexibility in the marketplace,” Richardson says. 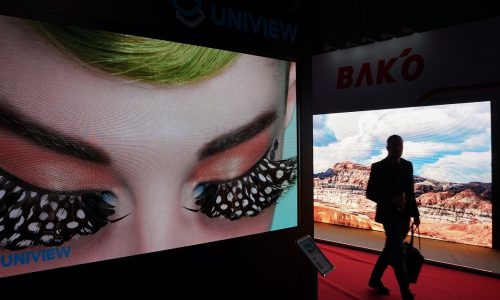 Related: 4 Key Lessons from ISE 2018 the AV Industry Should Pay More Attention To

“As the need for higher and higher resolution displays gains traction, we have evolved products to meet the demands of ultra high-resolution screens,” says Andrzej Lubaszka, chief technologist for Analog Way.

“DPI’s booth utilizes an Analog Way Picturall media server and a VIO 4K multi-converter, but that’s not the only way we can support 8K.  We can address customer needs with specific solutions tailored to their project.”

For DPI’s NAB exhibit Analog Way’s Picturall media server will feed the INSIGHT 8K projector and manage content.  VIO 4K will convert DisplayPort to SDI as well as switch between Picturall and other 8K sources.

“We’re glad that NAB 2018 has given us another opportunity to work together,” says Lubaszka. “Analog Way and DPI complement each other very well.  We’re both premium product providers with a deep commitment to quality and customer support.”